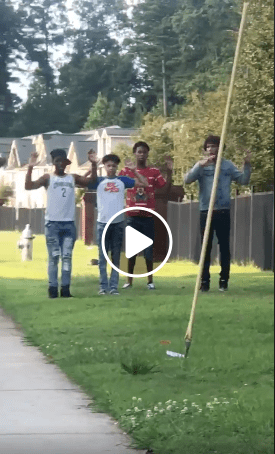 2:05 p.m.: UPDATES with call for demonstration Wednesday at county headquarters

Video of a Clayton County Police officer holding five juveniles at gunpoint near Pointe South and Thomas Road in Jonesboro Monday has residents and elected officials demanding an explanation. Organizers are calling for a protest at Clayton County Headquarters, 112 Smith St., Jonesboro at 5 p.m. Wednesday.

The video, which runs just over six minutes long, was posted to Facebook and shows five kids standing with their hands up as the officer holds them at gunpoint and a passing car pulls over. A man gets out of the car, then stands by the teenagers, also with his hands up.

As one of the boys fidgets, the woman calls out, “Baby, don’t move, just stand still. Don’t move, baby.”

All five of the boys stand still with their hands up.

More adults join in, begging the officer not to shoot, and cursing him out.

More CCPD cars pull up. Near the end, two Jonesboro Police Department cars and a Clayton County Sheriff’s Office car also pull up as people yell at the police, shoot cell phone video, and demand to know why the teens were held at gunpoint.

Shanelle Saranitha Williams, who posted the video, wrote, “The kids were shadow boxing near the convenient store and this is what happens!!! We begged and pleaded for the officer to put his gun away. These little boys were no older than 15. 15?! My little brother is here in Atlanta with us he is 5’3″ ten ten years old! All U could see was him or my nephews walking to the store or wrestling in the street! Do they deserve to have a gun pulled out on them?!!!! No!!!!!!!!”

District 3 Commissioner Felicia Franklin Warner said on Facebook that she also has asked Police Chief Kevin Roberts for more information about the incident.

In a response released to social media, CCPD said: “The Clayton County Police Department leadership is aware of the incident and the video that is on social media involving what appears to be young teenagers. What everyone is seeing is a small portion of the entire incident.

“Today we will be releasing all of the information to include:

· The incident report and the initial E911 call.

“Chief Kevin Roberts remains committed to being transparent and accountable to our community.”

“Please release the ‘full video,'” Al Mitchell wrote. “I’m really anxious to see how you all can defend holding children at gunpoint then releasing them without charge.”

“For a gun to be ‘needed’ they were sure released quickly,” Tara Mann wrote. “So clearly a gun was never truly needed. If an officer is that scared then they need to consider a new career.”

And Vonita L. Green wrote, “The Police Officer should not have pulled a gun out on those kids who were clearly cooperating. There is no excuse for you Clayton County Police Department and stop trying to justify this. That Officer should be fired…… point blank period. We are sick and tired of you traumatizing our youth. Thank God that concern citizens had to step in and video this because it could have ended badly.”