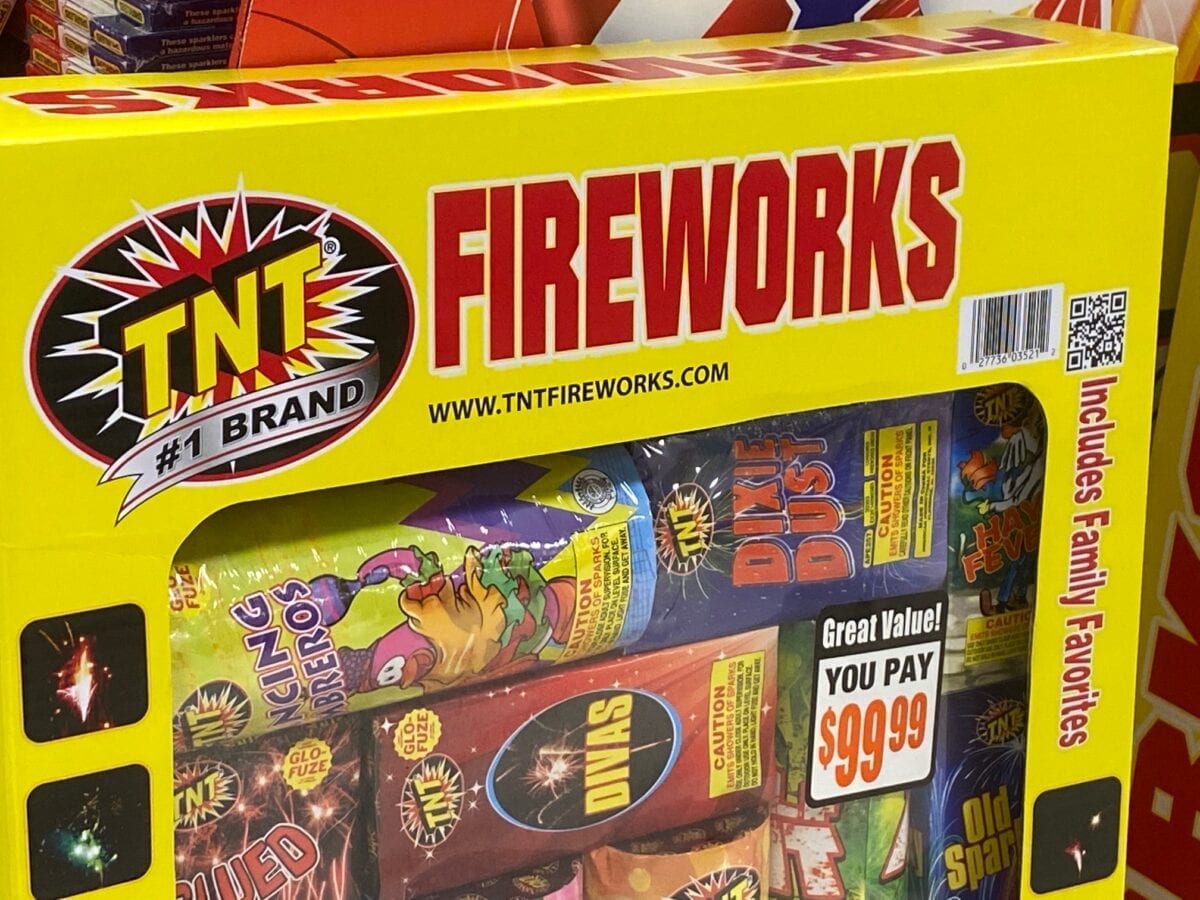 It was popping at Phantom Fireworks in Morrow around lunchtime Friday. Crowds shot in and out, their grocery carts loaded with cases of Roman candles and M-98 Wolf Packs and huge assorted fireworks kits with names like Rolling Thunder, Aerial Barrage, and, if they had $1,499 to send up in smoke, the mighty Grounds for Divorce Assortment–forking over American dollars for Chinese-made pyrotechnics.

“Everything’s half-price,” several customers said as they maneuvered their carts stacked with fountains, repeaters, and rockets. One person said his arsenal cost about $143. Another said she’d dropped about $300 on her overflowing cart.

Fireworks are synonymous with the Fourth of July. With do-it-yourself pyrotechnical shows comes danger: most people know someone who has been burned or injured by fireworks. Emergency room doctors and fireworks sellers alike warn of the dangers.

The Consumer Product Safety Commission, which collects fireworks injury data from emergency rooms, estimated 10,000 people were injured in fireworks accidents in 2019, with 7,300 of them hurt badly enough to go to the emergency room. The fireworks type was not known in 56 percent of the ER cases. However, 24 percent of people who went to the ER with fireworks injuries were hurt by multiple-tube, reloadable, Roman candles, novelties, and sparklers. Among accidents involving known devices, the CPSC found, sparklers actually caused more ER visits last year (900) than all regular firecrackers combined (800).

But danger is part of the allure, and people keep coming back.

Is it loud in here or is it just me?

This year, there have been numerous reports, around Clayton County as well as the rest of the United States, of what seems to be a sudden increase in fireworks explosions, even on non-holidays, during daylight hours, and well into the wee hours of the night.

For people with PTSD, the holiday can be a nightmare. The U.S. Marine Corps’ Marine Corps Community Services points out, “Many Marines with PTSD can mentally prepare for planned events, like ones that occur annually in their hometowns. But for those like (combat veteran Kevin) Rhoades, the unexpected rat-a-tat of firecrackers could bring them back to the battlefield and set them on edge.”

In 2015, Rhoades placed a sign in his yard that read “Combat Veteran Lives Here. Please Be Courteous with Fireworks.”

Saying he likes to set off fireworks, too, Rhoades explained that it’s different when explosions wake him up at 2 a.m. The point of the sign, he said, was to start a conversation, not pour cold water on other people’s fun.

Neighbors who don’t appreciate the noise say they’re fed up. Local residents on the Nextdoor app registered their displeasure.

Mitsy Gallardo of Morrow said fireworks are waking up her four-month-old baby during nap time. Meredith Lord said her four-year-old “is terrified when they wake him out of a dead sleep.” And several people complained that their dogs are being terrorized by the racket.

Several said they wanted to see their elected officials ban fireworks after 9 or 10 p.m.

“If I could do something to help bring about a reversal or amendment in the law (to prevent nightly use), I would!” said Janet Tyree. “The calmness and peacefulness of our suburban evenings have been hijacked by an anonymous neighbor and it feels like we are powerless to stop it. The vibrations of many of these fireworks can be felt through the walls of our home and throughout my body. Having this occur so close to my home and almost every night is insanity!”

Tyree said her family can’t sleep until the fireworks stop, “usually after midnight,” and that “the smoke eventually fills nearby streets and the firework cinders fall like rain over our trees and rooftops….Much of this sounds like the sounds of a war zone.”

Another concern is environmental. That includes chemical residue that lands in nearby yards and waterways, as well as smoke and particles in the air. Large bottle rockets land like arrows in neighbors’ yards.

Clayton County Chairman Jeff Turner said, “If the BOC passes any ordinance in reference to fireworks, it would only affect the unincorporated parts of the county. When the CCPD receives calls for firework violations, the officers usually, if they can locate the source, confiscate the fireworks and only in some cases will issue a citation for violation of county ordinance.”

Turner added that the police might be handling other things at any given moment: “As you can imagine, the Fourth of July weekend has always been busy for law enforcement and they will have to prioritize their calls to make sure they answer high-priority calls.”

Can my neighbor shoot off fireworks?

Is it legal? Pretty much.

An e-mail from Clayton County Police Capt. Jodi Turnipseed, posted to the Nextdoor discussion, notes that Georgia law allows fireworks on any day–not just holidays–between 10 a.m. and 9 p.m. If a county allows it, people also can shoot off fireworks, if allowed to by county noise ordinance or permit, between 9 p.m. and 11:59 p.m. on any night. People are allowed to shoot fireworks on Jan. 1 from 12 midnight to 1 a.m., as well as from 9 p.m. to 11:59 pm on Dec. 31, Jan. 1, July 3, and July 4.

Can my neighbor shoot off fireworks after midnight?

People who want to report fireworks after 11:59 p.m. July 4, between 10 p.m. and 9:59 a.m. on regular days, or anytime before or after legal holiday hours, can dial 911 first, then Animal Control “to ensure there are no frightened wandering animals,” Turnipseed said.

Animal shelters are often overcrowded with lost animals in early January and July, she said, and that may force shelters to euthanize some pets. Animals also can die from internal organ failure if they ingest firework, Turnipseed added, as well as suffer burns, injury, hearing loss, fear, and anxiety.

Can I shoot my gun in the air?

Marquel Peters, 4, was killed on New Year’s Day 2010 when a bullet thought to be from “celebratory” gunfire pierced the roof of his church in Decatur and hit him in the top of his head while he sat next to his mother.

Georgia law forbids shooting a firearm within 50 feet of a public road or highway, while under the influence of alcohol or drugs, or on somebody else’s property without their permission.

“That bullet will go up in the air fast and come down even faster,” Oliver stressed.

Think about where that might come down: through your neighbor’s roof into their kid’s bedroom, or into the body of an unsuspecting person in the next block.

A very lucky man in Riverdale was hit by a falling bullet recently. He said a brand-new shirtsleeve seems to have stopped the bullet from drilling through his bicep. His wife, who had just brought him his cigarettes, narrowly missed catching the round in her head.

“If you want to shoot guns, go to a local gun range,” Oliver said.

Which kinds of fireworks are legal?

Consumers can buy and shoot off the following kinds of fireworks without any permit: “All consumer fireworks meeting CPSC criteria as defined in 16 C.F.R. Parts 1500 and 1507, 49 CFR Part 172, and the APA 87-1 (2001 ed.); Roman Candles; wire or wood sparklers of 100 grams or less of mixture per item; other sparkling items which are nonexplosive and nonaerial and contain 75 grams or less of chemical compound per tube or a total of 500 grams or less for multiple tubes; snake and glow worms; smoke devices; or trick noise makers which include paper streamers, party poppers, string poppers, snappers, and drop props each consisting of 0.25 grains or less of explosive mixture.”

However, they absolutely cannot have any “[B]alloon, bag, parachute, or other similar device which requires fire underneath for propulsion or to release or cause to be released any floating water lantern or wish lantern which uses a flame to create a lighting effect in any public waterway, lake, pond, stream, or river.”

How do fireworks get their colors?

Fireworks get their colors from different chemicals, as Phantom Fireworks explains on its webpage. For example, red comes from strontium salts; white comes from burning metals like aluminum, magnesium, and titanium; and blue comes from copper salts.

Each firework contains whatever salts or metals are included to create the desired color, sometimes with a “chlorine-donating compound” to enhance that color; fuel; oxidizing chemicals to burn the fuel; and a binding chemical to stick everything together.

Watch the pros do it

You can enjoy a free fireworks show at Lovejoy Regional Park in Hampton starting at 9:15 p.m. on July 4. The show includes over 1,000 launches and music and will last 18 to 20 minutes. Because parking is limited and social distancing is mandatory, you must register in advance at https://tinyurl.com/CC4thofJuly

We are in no way responsible for your decision-making process and we are not telling you to play with fireworks. Many groups offer fireworks safety advice:

Have a safe 4th of July weekend!