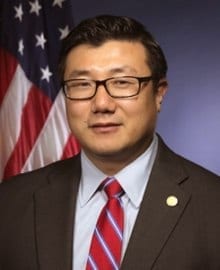 U.S. Attorney General for the Northern District of Georgia Byung J. “BJay” Pak says he and other federal law enforcement officials throughout Georgia are going after suspected agitators who allegedly infiltrated peaceful demonstrations over George Floyd and other victims of police brutality.

Pak said the move comes at the direction of U.S. Attorney General William P. Barr, and that it includes the U.S. Attorneys of the Northern, Middle, and Southern Districts, the Federal Bureau of Investigation’s Joint Terrorism Task Force (JTTF), and state and local partners. Across the country, 56 JTTFs are involved in the crackdown.

Barr named “Antifa” as one group allegedly behind the destruction that protestors say derailed their peaceful demonstrations.

“The violence instigated and carried out by Antifa and other similar groups in connection with the rioting is domestic terrorism and will be treated accordingly.”

“Antifa” is not a group but a description of left-wing groups that oppose fascism, some of which do not believe in violent tactics.

Others posted video of uniformed law enforcement officers drawing down on journalists, attacking protestors, and flashing the “OK” sign, which has been co-opted by white extremists.

“With the rioting that is occurring in many of our cities around the country, the voices of peaceful and legitimate protests have been hijacked by violent radical elements,” Barr said. “Groups of outside radicals and agitators are exploiting the situation to pursue their own separate, violent, and extremist agenda,” Barr said.

“It also undercuts the urgent work that needs to be done – through constructive engagement between affected communities and law enforcement leaders – to address legitimate grievances,” he added. “Preventing reconciliation and driving us apart is the goal of these radical groups, and we cannot let them succeed.”

The effort is meant to “identify criminal organizers and instigators…and (seek) federal prosecutions where applicable.”

Pak said, “The Attorney General has made it clear that those who instigate or carry out violence will be arrested and prosecuted. Americans enjoy the right to peacefully assemble and protest. However, when it turns violent and destructive, a line has been crossed. We are employing every federal asset our districts have to assist our state and local partners as they work to maintain order and public safety.”

Charlie Peeler, U.S. Attorney for the Middle District of Georgia, added, “The right to peaceful protest is protected by the First Amendment, but there is no cover for the violent, needless destruction of personal property, and the chaos we have witnessed across the country over the past several days. Let me be clear: anyone who chooses that criminal path will be aggressively prosecuted by our office. I want to thank our federal, state, and local law enforcement officers, and Georgia’s National Guard, who are on the ground protecting our lawful right of expression, as well as our property and safety.”

“Peaceful demonstrations throughout the Southern District in recent weeks have been a model for appropriate exercises of citizens’ constitutional right to express their grief and concerns,” said Bobby L. Christine, U.S. Attorney for the Southern District of Georgia. “If anyone, whether locals or outside individuals, escalates to unlawful behavior and disrupts our communities, we stand ready to assist local law enforcement with federal resources to safeguard the lives and property of our citizens.”

Chris Hacker, Special Agent in Charge of FBI Atlanta, concurred. “The FBI is dedicated to protecting our citizens and upholding the Constitution,” he said. “The Constitution gives every citizen the right to protest peacefully, but when a few people abuse the rights of the many peaceful protesters by stoking violence and destroying property, we must enforce the law. Federal prosecutions are a tool we will use to assist our state and local law enforcement partners who are on the front lines trying to maintain order.”