End of an Era: Anne and Bill’s a COVID-19 casualty 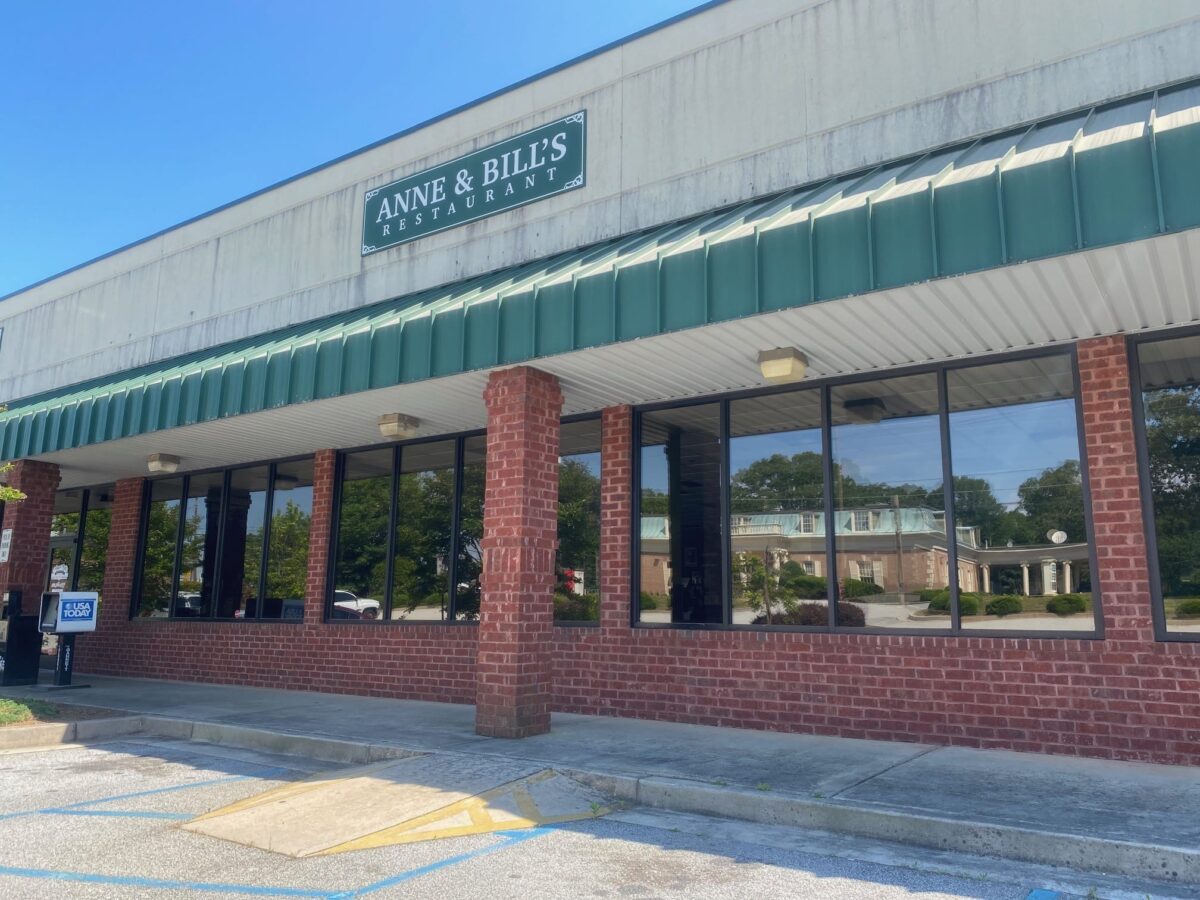 After 46 years and a brave effort at serving takeout during the COVID-19 shutdown, a Clayton County landmark that was Forest Park’s busiest restaurant suddenly shut its doors Monday, stunning generations of customers.

A Day-Glo orange sign in the front door of Anne and Bill’s Restaurant on May 12 read, “Closed Due to Lack of Business. We Are Devastated and At A Loss For Words.”

Inside, the wooden office chairs and Formica-topped tables stood forlorn and empty. The bulletin board full of photos, the patriotic signs and folded American flag, the nostalgic ads touting RC Cola and Public Phone, the NASCAR shrine, still lined the walls. The old upright vacuum cleaners loitered in corners here and there.

Anne and Bill Kirkham were married for 62 years, he a World War Two vet, she a Depression baby. Outside the gates of Fort Gillem, they founded the restaurant that remained in the family for three generations, serving down-home Southern breakfast and lunch amid nostalgic photos and smart-aleck signs that peppered the dining room. It was the kind of place you went to chew the fat with your old buddies, to grab a hot meat-and-two, or to savor a cup of plain old coffee (in a mug bearing ads for other local businesses) along with an extraordinary biscuit.

When Fort Gillem shut down, and most of Main Street along with it, Anne and Bill’s kept going strong. It was where the locals congregated after church on Sunday, where politicians studded the parking lot entrance with campaign signs every election, where the old-timers spent their mornings swapping gossip. The waitresses treated everyone who came in like a friend. And the food was better than Mama used to make.

Anne and Bill’s brought food for the homeless to First Baptist Church and quietly took care of seniors who ran out of money before they ran out of month.

Anne Kirkham died in 2005. Bill died in 2017. They are buried in Forest Hill Memorial Gardens.

When their daughter, owner Kathy Chafin, announced the closing suddenly on Facebook, a shockwave raced through the community. Longtime customers showered her with prayers, memories of the restaurant’s original iteration where the Forest Park Chick-Fil-A now stands, and particular menu items. A few blamed Democrats or the COVID-19 “hoax.” However, other factors came into the decision, manager Cristie Willis, the owner’s daughter and Anne and Bill’s granddaughter, said.

“The building’s tied up in a divorce, the divorce is finally over with, the building’s up for sale, anyway,” Willis said. “There’s a lot of layering things. But the COVID’s what’s done it.”

Other family members who were going to buy parts of the building “pulled out, because nobody knows what’s going to happen,” Willis said. “The business that we’ve had, it’s been cut more than half. So it’s not even enough to sustain staff and to sustain what we’ve already established here.”

On top of that, the restaurant had recently opened a second location in McDonough, she added.”We closed it first, and then this one came after that….We tried everything…. McDonough, we felt that that could have been something great, but we just didn’t have enough time there.”

They tried everything. They sent some staff home early on. They added GrubHub delivery. They offered daily specials for curbside take-out. They somehow got hand sanitizer. They reopened with limited seating on May 4.

They asked customers to wear masks. For customers who showed up without, they sold masks for $1.75: “you can remove mask when you are eating but please wear it as you leave…some customers have been offended that we ask them to wear them but we want to be safe for everyone concerned.”

But it wasn’t enough.

A staple. A legend. A mainstay business. My dad’s second home. A Forest Park community monument. That’s what customers are calling Anne and Bill’s in their Facebook comments.

“It was unbelievable last night when she made the post, yesterday afternoon, so many calls and texts and things that were coming through,” Willis said. “My phone was non-stop, still going off today, I mean, it’s unreal, the support. And that’s been good because it’s helped, but at the same time, you just can’t quit crying. I mean, I haven’t even been able to read everything on Facebook and the different social media because there’s so many people.”

“Sorry to hear this,” wrote Marie Short Mosteller. “My dad ate there so many times before he passed away. He ate there for many years. I enjoyed eating there. The food was great and the service was wonderful. Praying for you all.”

“My Mama & Daddy ate there all of the time when they were alive,” Brinda D. Strength-Denman wrote. “This would have broken their hearts. God Bless Y’all!”

Billy McNair recalled some long-gone competitors: “My mom and I would come eat there almost every day when you were at the old Harbins on Old Dixie Highway. Then I think yall moved to the old Sambo’s restaurant. We wouldn’t eat Davidson’s or Morris bro, it was nasty.”

Angie Huddleston wrote, “I’ve been eating here since I was a little girl, I hope that things get much better soon! I can’t imagine a Forest Park without Anne and Bill’s!”

Others, like Brian Cochran, recalled “the building where chic fil a is now.” Constance Harpe said, “I ate at your place at West End. You could not get thru the doors it was such a crowd…in Forest Park.. You had more room. But still saw customers waiting and waiting for a table. So sad to see your doors close.”

Dennis Houk said, “We are going through the worse hoax and scams this country has ever seen,” adding, “Thank you demon o crats.”

Customers suggested various small business grants. They urged the restauarant to start a GoFundMe. Several offered to volunteer for shifts to keep the place open. It means that much to them.

Willis said everyone at the restaurant had been divvying up food still on hand to make sure family members and staff had enough to eat.

The closing is more like the death of a well-loved family member and friend. “We’re just trying to let it sink in with us,” Willis said, adding that the family is going through a lot at the moment and that everyone was “overwhelmed” by the decision.

“Who knows, maybe somebody in the family will open another someday.”

Then she and two others left the building, she said, to go find some lunch, turning onto Main Street from the empty parking lot.