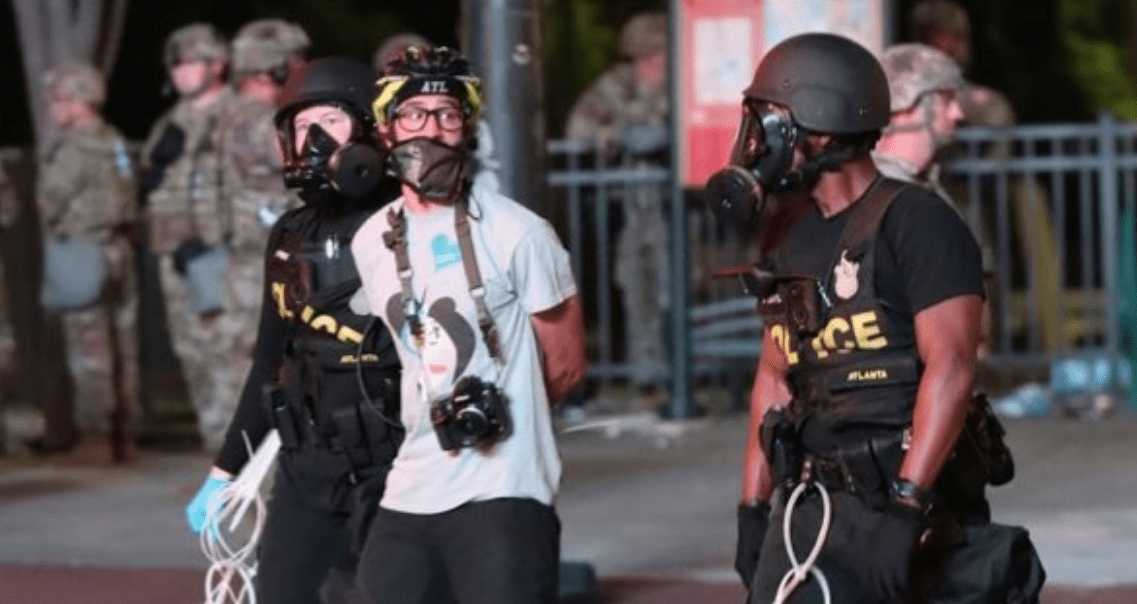 Freelance photojournalist Sharif Hassan has filed a federal civil rights suit against the City of Atlanta and the Atlanta Police Department after he was arrested while covering last summer’s Black Lives Matter protests and held overnight. We’ve asked the Atlanta Police Department, Hassan, and UGA Law First Amendment Clinic (part of his legal team) for comment and will update with any responses.

On June 1, 2020, Hassan was covering Atlanta protests of George Floyd’s murder, photographing the arrest of a protestor from a distance on the public street. At that point, according to his legal team, “APD officers stopped his filming and arrested him. The officers ignored his statements that he was a working journalist there to cover the protests.”

Hassan, an Arab-American born in New Orleans, was held on an alleged curfew violation at the Atlanta City Detention Center. He was the only one of several journalists in the area who was taken into custody, his lawyers say. Mayor Keisha Lance Bottoms had issued an executive order imposing a 9 p.m. curfew, However, “(t)he order contained no explicit exception for members of the media engaged in newsgathering.”

The right to photograph

In addition, APD standard operating procedures (section 4.4.1) “prohibit all employees from interfering with a citizen’s right to record police activity by photographic, video, or audio means, as long as the recording by the citizen does not physically interfere with the performance of an officer’s duties.”

Some of the most important functions journalists can perform is to document civil unrest, political protests, and citizens being arrested. That right extends to everyday citizens, as the George Floyd case itself demonstrates.

Darnella Frazier, who took cell phone video of Floyd’s murder at the hands of then-Ofc. Derek Chauvin, was awarded a special Pulitzer citation “(f)or courageously recording the murder of George Floyd, a video that spurred protests against police brutality around the world, highlighting the crucial role of citizens in journalists’ quest for truth and justice.” A jury found Chauvin guilty and sentenced him to 22.5 years in prison. Chauvin has appealed his sentence but faces charges in a similar case in which he allegedly grabbed a teen by the throat.

Amid some activists’ calls for police reform, a widespread feeling among law enforcement officers that they have been “under attack” since Ferguson, and ginned-up political rhetoric about “fake news,” journalists covering last summer’s protests were caught in the crosshairs–in some cases, literally, such as photojournalist Linda Tirado, who police shot in the eye and blinded with a foam bullet. Some officers have been documented targeting members of the news media deliberately, even pointing the muzzles of firearms directly at camera lenses and, by definition, the journalists behind them.

Hassan was not the only journalist in Atlanta whose coverage was interfered with by law enforcement during last summer’s protests.

The Clayton Crescent issued an editorial statement on the detention of former Atlanta Journal-Constitution photojournalist Alyssa Pointer, who is Black, and the arrest of Wall Street Journal freelance reporter Haisten Willis, who is White. Officers from the Georgia Department of Natural Resources detained Pointer until nearby colleagues convinced the officers that she was a working journalist. APD officers illegally seized Willis’ phone, which contained his digital credentials. An officer allegedly told Willis those digital credentials were “illegitimate.”

Hassan’s attorneys argue that the City of Atlanta’s curfew was unconstitutional, and that the city also violated the First Amendment by arbitrarily granting access to some journalists, but not all journalists, during the curfew. They point to the fact that Hassan was arrested but that other reporters were not, citing the Equal Protection Clause of the Fourteenth Amendment, as well as the First Amendment.

“Without an exception for the media to engage in its most basic newsgathering function between the hours of 9 PM and sunrise on May 29, 2020 through June 4, 2020, Hassan and other members of the media were deprived of their press freedoms while the public lost its eyes and ears on events of significant importance, including after-curfew interactions between civilians and Atlanta City police,” they wrote.

According to the federal complaint filed in the U.S. Northern District Court of Georgia November 8, the city and APD allegedly deprived Hassan of his Constitutional rights, and violated the First, Fourth, and Fourteenth Amendments of the U.S. Constitution, the federal Privacy Protection Act forbidding illegal searches and seizures, and “Georgia law.”

While Hassan photographed the arrest from a distance, the complaint alleges, one APD officer blocked Hassan’s view of the arrest and, along with a second officer, took him into custody. One of those officers, identified in the complaint as Francesca Barber, Badge 6428, wrote Hassan’s arrest citation (2550538). According to the complaint, Hassan identified himself as a member of the news media. However, the officers did not seek further information nor did they acknowledge his status as a member of the working press. Officers zip-tied Hassan’s hands, as he was wearing his camera gear, even though television videographers also were present and were not arrested. They then processed him near CNN Center, took his camera gear (and memory cards of images shot earlier that were in his pockets), gave him a face mask, put him on a bus for about two hours, then transported him to ACDC around 11 p.m.

Once there, Hassan repeatedly asked staff how to get an outside line to place a phone call to tell his family he’d been arrested, but jail staff ignored his requests. Other non-Arab-American detainees were allowed to make phone calls. Jail staff then separated Hassan, made him change into a red or orange jumpsuit, put handcuffs on him, and was taken by elevator to “an upper level” of ACDC. According to the complaint, Hassan could hear screams and was afraid of what might happen to him there.

Hassan was placed into a cell by himself. The cuffs “made it difficult for him to pray” as a Muslim “or sleep that night.” Around 3 a.m. or 4 a.m. on June 2, an officer took off Hassan’s cuffs. However, Hassan got nothing to eat “until around mid-day on June 2, 2020.” Around 1 p.m., “Hassan was taken downstairs and placed in another holding cell with approximately four other individuals, some of whom were screaming or otherwise acting out” and not all of whom were wearing masks.

Later, he was taken to a third cell, while others who had been arrested at the protests “were lined up, not inside a cell, waiting to be arraigned by a judge via video-conference….wearing their own clothes…and not handcuffed.”

The complaint continues: “A woman who Hassan recognized from the transport bus the night before asked him why he had been separated from the rest of the arrestees who had been brought to the ACDC together. She commented to Hassan that he had been one of the quietest people on the bus. Hassan had no answer, although in his own words, he was experiencing being treated like ‘a felon.’ Hassan several times asked officers at ACDC why he was being treated differently than the other arrestees with whom he had been brought to ACDC, but he received no answer or explanation.After appearing before a judge via video-conference, Hassan was
taken back upstairs in ACDC and again placed in the cell where he had been held overnight. When Hassan looked out the window of this cell, he saw individuals who had been on the transport bus with him the night before. They were outside the detention center, eating and drinking, having already been released.”

Finally, the complaint alleges, “Right before he was released, Hassan was photographed and fingerprinted as he had not been formally booked prior to that point.” Then he was let out the back door of ACDC.

He didn’t get his camera gear back until about a week later–and APD and/or ACDC has yet to return several of his memory cards, which contained “photographs from the preceding week of events, including a picture of protest fires in front of the CNN Center with people waving a ‘Black Lives Matter’ flag.” The complaint notes that Hassan was deprived of the ability to sell his professional images, which is how he makes his living.

Even though the city posted a clarification that people who were “working” were exempt from the 9 p.m. curfew, Hassan spent the next six months fighting the city’s charge against him. Because he had three court dates, he was not free to travel to cover international news. On January 13, after his criminal defense attorney filed a motion to dismiss/demurrer “premised on his free speech and press rights as a journalist, and identifying the City’s Policy of exempting some members of the media from the Mayor’s curfew while they were working, but not others, the prosecutor dropped the charge against him due to what were termed ‘evidentiary
reasons.'”

Since then, Hassan, who survived the dangerous conditions of covering the Arab Spring protests, has not covered political protests. Instead, he has been shooting sports and corporate events “in order to avoid future arrest.”

From February 23 to April, the City of Atlanta repeatedly refused Open Records Requests to supply Hassan’s attorney with records of Hassan’s own criminal arrest. When the city’s attorney, Amber Robinson, finally responded, she allegedly claimed the records were exempt due to “attorney/client privilege.”

The City of Atlanta has some experience with Open Records Act violations. Last week, former Mayor Kasim Reed’s one-time press secretary, Jenna Garland, lost an appeal of her criminal conviction on two misdemeanor counts of violating the state’s Open Records Act. In 2017, Garland sent text messages ordering a lower-ranking employee to “be as unhelpful as possible” and “drag this out as long as possible” in response to an Open Records Request from WSB-TV’s Richard Belcher. He was investigating Atlanta Watershed Management records for Reed’s brother and several councilmembers, based on a tip that they allegedly had not been paying water bills. Garland was the first person in Georgia convicted of criminal violations of the ORA.

Hassan is seeking a jury trial, along with:

Do you value reporting like this? Join The Clayton Crescent as a monthly member at https://donorbox.org/clayton-crescent (please click that monthly recurring tab!) and stay in the know about important legal cases and other government activities that bear watching. The Clayton Crescent is a 501(c)(3) nonprofit newsroom and your gift is TAX-DEDUCTIBLE. Thank you!