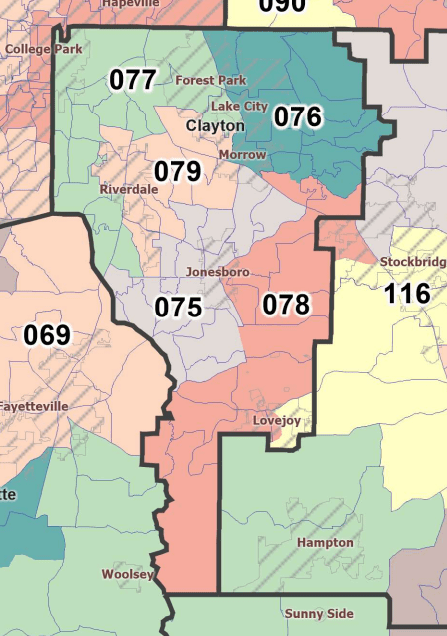 Proposed maps that would change how Clayton County voters are represented got just three days of public comment last week and are about to go up for a vote before the full Georgia Senate as soon as Tuesday.

The Senate Reapportionment and Redistricting Committee voted 9-4 Friday to approve the maps. The Atlanta Journal-Constitution’s Maya T. Prabhu was there when the vote was taken. She reported that “(t)he proposed map would shore up the Senate’s Republican majority, solidifying GOP-held districts while creating one additional Democratic-leaning district. There are currently 34 Republicans and 22 Democrats in the state Senate.”

Democrats complain that the GOP-controlled committee is rushing the process through without enough time for public participation. Capitol Beat’s Dave Williams noted the State Senate map came out on Election Day and that the committee voted on the map “even as the Atlanta Braves celebrated this week’s World Series victory with a parade within a few blocks of the Georgia Capitol.”

Remember, two factors go into redrawing districts: population and location. There has to be roughly the same number of people in each district, and the district has to make as much sense on the map as possible. And it’s not just a matter of the party in power taking advantage. The federal Voting Rights Act prevents redrawing legislative maps in ways that dilute minority voting power.

Suffice to say, Clayton County’s legislative and Congressional districts could look very different by the end of the week.

Clayton County’s state Senate districts: before and after

This is how the current map looks for Clayton County’s state Senate districts (34 is Pepto-Bismol pink and 44, which is not numbered on this map, is the yellow part that stretches into Southwest Dekalb):

As of November 4, this is the proposed map for those districts:

Clayton County’s state House districts: before and after

The county is divided into Districts 60, 63, 74, 75, 76, 77, and 78. District 63 (red), Rep. Debra Bazemore’s district, winds through southeast Fulton, east Fayette and the Panhandle of Clayton County. District 78 (green), held by Rep. Demetrius Douglas, includes Lovejoy and the southeast corner of Clayton County, and crosses into Henry County on the west and north around Stockbridge. District 76, Rep. Sandra Scott’s district, stretches from the area around Fort Gillem into most of north Henry County.

Now take a look at the Georgia House Districts proposed Nov. 8, which would carve Clayton into six new state House districts–one of which is but a crumb on the map:

Scott’s District 76 would lose about half its territory–the part in Henry County. Democratic Rep. Demetrius Douglas’ House District 78, which is 69.39% Black, carves out the far southeastern corner of Clayton County and adds it to Republican Rep. Terry England’s House District 116, which is 56.71% Black. It also would take the Panhandle from the current District 63 and lose the northern bit above Stockbridge in Henry County. Districts 60 and 74 and the western side of District 77 near Riverdale would become a new District 77. The current District 77 would lose part of the Riverdale area and become a new District 75, taking up most of Morrow and unincorporated Jonesboro.

Clayton County’s Congressional districts: before and after

Clayton County has two Congressional districts: the 5th (purple) and the 13th (yellow). The “Fighting Fifth,” long led by civil rights icon Rep. John Lewis, was created to give Black voters better representation and currently held by Rep. Nikema Williams, is Georgia’s most heavily Democratic district. The 13th, under the leadership of Rep. David Scott, is a wonder to behold:

Now consider the October 21 proposed Congressional district map, which takes chunks of Douglas and Fulton out of the 13th, as well as part of Fulton out of the 5th, and puts them into the 10th, held by Rep. Jody Hice (R). It also adds most of Fayette and Henry and all of Spalding into the 13th:

Only the far northwestern corner of Clayton County would remain in the “Fighting Fifth” District, which also loses ground to Congressional District 4, held by Rep. Hank Johnson (D). All the rest of Clayton County would be lumped into Rep. David Scott’s 13th Congressional District, which includes the western parts of Douglas and Fulton Counties, all but the far western portion of Fayette County, about two-thirds of Henry County, and all of Spalding County.

Compare that to the proposed map from September 27:

This map had a little bit more of the northwestern corner of Clayton in House District 5, and not nearly as much real estate in House District 13, which came from Rep. Drew Ferguson’s 3rd Congressional District (the gray part of the map).

What districts are in my city?

Right now, here’s who represents each city in Clayton County. We’re including all of the districts in each city. This list comes from the Gold Dome and does not include Conley, Ellenwood, Rex, Irondale, or Bonanza:

What do you think?

Lots of moving parts go into redistricting. The problem, critics say, is that the current process does not allow for effective citizen participation. Maps are redrawn behind closed doors and made public with a brief period for public comment.

The committee in charge of redrawing the maps is overwhelmingly Republican, leaving members open to criticism that the process is too heavily partisan.

The Democratic Party of Georgia, in a press release Monday afternoon, said State Senate Republicans "have refused to answer basic questions about their map proposal, which diminishes the political power of voters of color and creates a “significant Republican advantage," citing the Princeton Gerrymandering Project's grade of "F" for partisanship in Georgia's proposed maps:

Here is a link for you to tell legislators what you think about the proposed maps and how they might affect your vote. (Keep in mind that whatever you post will be an official public record for all time, not a Facebook comment, so give it some thought first.) But don't wait. The session resumes this Friday.

The Princeton Gerrymandering Project, along with Fair Districts Georgia (a nonpartisan group), grades each map as it comes out for how well it balances political parties, how competitive races would be in the districts, and how well minorities are represented. Rather than hitting a specific number, maps might score anywhere within an acceptable range, which allows for varying factors between districts. The closer to the middle of the range a map scores, the more balanced it is.

By running simulations that created about one million possible maps, PGP was able to come up with maps that managed both political preferences and contiguous districts about 98% of the time.

According to PGP's assessment, "Both chambers of the Legislature and the Governorship are controlled by Republicans, and there is no initiative process. This means that any redistricting reform will have to pass through the General Assembly. With single-party control, there is an increased risk of partisan and racial gerrymandering. Additionally, this will be Georgia’s first cycle without the protections of Section 5 of the Voting Rights Act, which was struck down in the 2013 Supreme Court case Shelby County v. Holder. In the absence of preclearance requirements for communities of color, and given the recent history of gerrymandering in Georgia, observers should closely monitor every step of the redistricting process to ensure fair treatment for all."

You can go back and watch video of previous meetings about redistricting on the General Assembly website, as well as on the House and Senate reapportionment and redistricting committees.

You also can read what other people said about the process.

If you want to get deep into the maps, you can get the files associated with each:

Sooooo… where would you be planning on getting your local news without The Clayton Crescent? Pony up and keep nonprofit news alive and well in Clayton County! Your monthly membership not only brings you the news that you’ll eventually see on the local TV stations and other outlets, but also entitles you to special members-only events. Join now at https://donorbox.org/clayton-crescent, and please choose a monthly recurring gift. A good rule of thumb is $20/month but memberships start at $10 per month or $100/year. We thank you for helping us keep you informed!