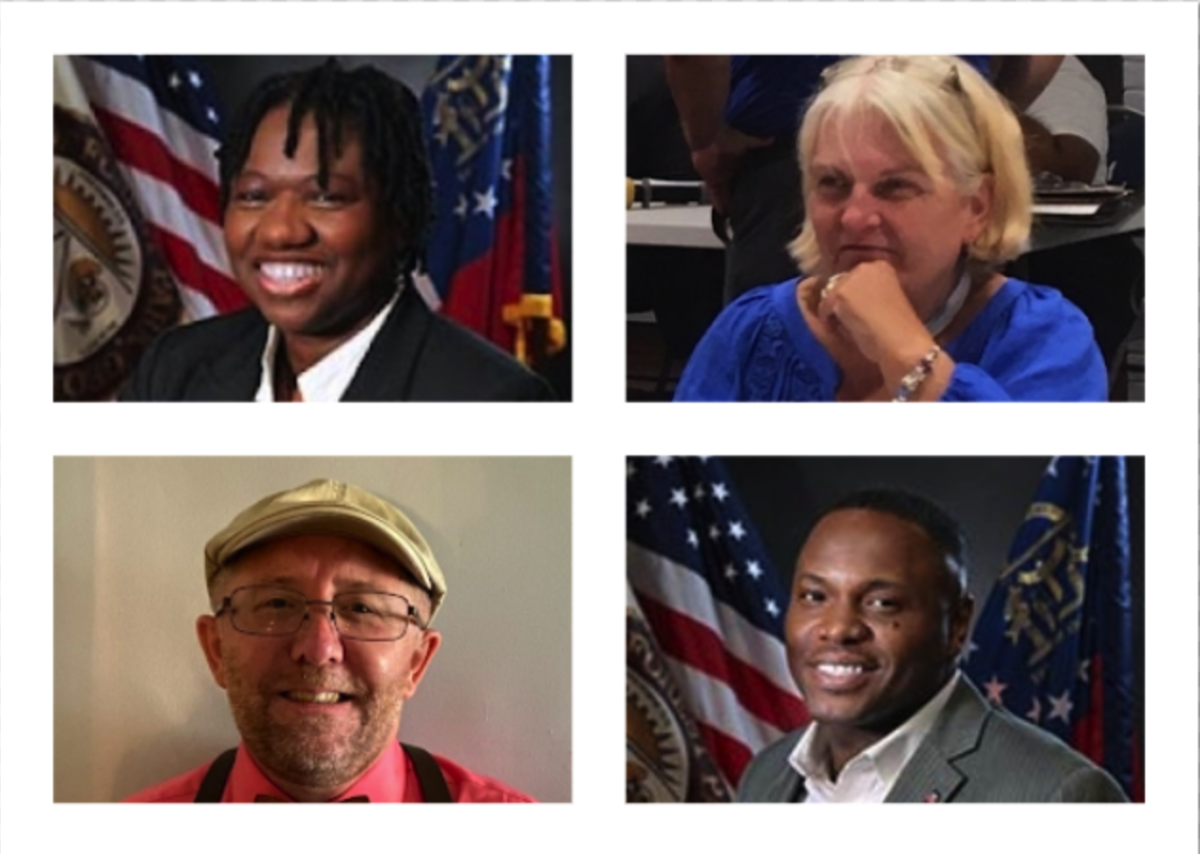 In Ward 1, James beat Smith’s husband, Tommy, who was the incumbent previously; he is now running for mayor. James has been active in her ward, putting on a monthly Zoom meeting where different department heads give updates on what’s happening in the city. While the information is branded as Ward 1 (and the whole city is invited to take part), it applies to the city as a whole. It’s not clear why the city as a whole doesn’t provide these sessions for citizens to ask department heads questions about current and upcoming projects. James is a Forest Park High School booster and frequently promotes activities and events at FPHS from the dais during comment. In March, James also used the city’s taxpayer-funded video feed to broadcast an hour-long explicitly evangelical event that had been billed as “Unity and Healing in the Community,” but that did not include non-evangelical Christians. Butler, who frequently blurs the line between church and state, also took part in the event. James has been a staunch ally of Butler. After losing his seat to James, Tommy Smith alleged that she and Butler had plied voters with alcohol, then driven them to the polls (the case was thrown out on a technicality). Earlier this year, state investigators recommended that James be referred to State Attorney General Chris Carr’s office for allegedly improperly filling out six requests for absentee ballots (not the actual ballots themselves), two of which her attorney, Bruce Maloy, told the SEB were for her adult children. The State Elections Board chose to issue a letter of instruction instead. “She was very candid with your investigator when contacted–in fact, went to the investigator’s office and met with the investigator and sat down with the investigator and admitted it.” He added that he was denied an ORR for the file on the basis of it being an open investigation, although the same report was included as an exhibit in Fair Fight v. Raffensperger.

Trudy Smith is a longtime fixture in Forest Park politics. She has served as a municipal election observer, was a member of the Urban Redevelopment Authority board that Mayor Angelyne Butler dissolved over a bond dispute last year, and today (along with other experienced political appointees like Pamela Lake, Lois Wright, and Eliot Lawrence) serves on the Development Authority. Smith also is active in the Clayton County Georgia Republican Party as second chairman, but told The Clayton Crescent that she thinks of herself as more of an independent who has voted for both Republicans and Democrats. Both she and Tommy Smith turned out for an event with Eric Trump in Morrow. Smith also has filed complaints with the State Elections Board over alleged election improprieties. Most recently, she told the SEB about what she “personally observed what has been going on in Forest Park for approximately the last ten years. The increasing corruption in our city is completely a common-sense issue. The bad actors are consistent….As an example, we had a fully-functioning URA board. Once the current administration gained majority control, they maligned the makeup of the board, which had committed no wrongdoing. Then they ran a kangaroo court and voted to dismiss all of the sitting board members except for one–you guessed it–Lois Wright, elections superintendent. Ms. Wright was named to the Development Authority, Downtown Development Authority, and the newly-formed Redevelopment Authority. Is this a coincidence? I think not. She was instrumental in getting this council in place. They have made sure she was taken care of at every turn….Why would anyone go through such lengths for an unpaid volunteer position?” She added that James, Wright, and District 2 Councilman Dabouze Antoine had faced additional state elections violations.

In Ward 2, Antoine, who has worked as a school paraprofessional, is up against teacher and community activist Cliff Pellegrine. Antoine has held office since 2014. In 2012, Antoine pleaded guilty and paid a $430 fine after using a passkey to walk in on a woman at the In Town Suites, where he worked as a security guard. In 2016, Antoine earned a certificate of recognition for 42 hours of training with the Georgia Municipal Association. Earlier this year, the State Elections Board issued a public reprimand of Antoine and fined him $250 for electioneering within 150 feet of the poll in 2017. Antoine has crossed the line of civility during council meetings with both Butler and Akins-Wells, openly defying the mayor’s authority in one case and outing Akins-Wells as an abuse survivor from the dais–drawing audible gasps from several women in the audience. Both he and Akins-Wells settled lawsuits separately with the city after allegations that the former police chief, Dwayne Hobbs, had ordered a special detail to tail the councilmembers, set up cameras outside their homes, and sift through their garbage. Antoine has made several mission trips to Haiti, most recently asking the council to send cell phones and laptops and to use city funds to ship an old water camel the city donated to its sister city in Haiti. The council turned him down, saying it had already donated the electronics and the camel, and could not afford the five-figure shipping fee. Antoine regularly refuses to comment when approached about routine council matters.

Pellegrine, a Connecticut native who occasionally speaks during the public comment period of city council meetings on topics like the Forest Park Fire Department’s gun locker policy, also works at Forest Park High School, where he calls the football games and is a special education teacher. Pellegrine filled out a partisan candidate survey issued by the Clayton County Democratic Party, but did not return The Clayton Crescent’s non-partisan candidate survey.

He has expressed concern for seniors who face rent increases but has not put forth a plan for solving the problem. He also says he wants to “return a level of integrity to the Ward 2 Council seat,” adding that he would be “a positive presence in our ward and throughout the city to meet with folks in the ward to hear directly from you about the issues you face.”

Pellegrine’s Facebook campaign page is managed by K’Sandra Thomas, a former city council aide who is the daughter of political operative Kevin Thomas. James opposed Kevin Thomas’ attempt to secure a sanitizing services contract with the city during the COVID-19 shutdown.

Pellegrine’s campaign website reads in part, “As your Councilman, I will strongly advocate for a consistent and reliable system that allows council meetings and authority board meetings to be accessible online and recorded and the minutes of those meetings updated quickly and efficiently on the city’s website.” The Clayton Crescent, with the backing of attorneys from the University of Georgia Law First Amendment Clinic, went through a public and protracted battle over public access to meetings, until the complaint went to the state Attorney General’s office and the city agreed in December 2020 to install a professional livestreaming audiovisual system in chambers (that is run by an audiovisual professional) for approximately $30,000. As a result, citizens of Forest Park now can access reliable audible and visible livestreams and recordings of government meetings. (You can read full coverage here.)