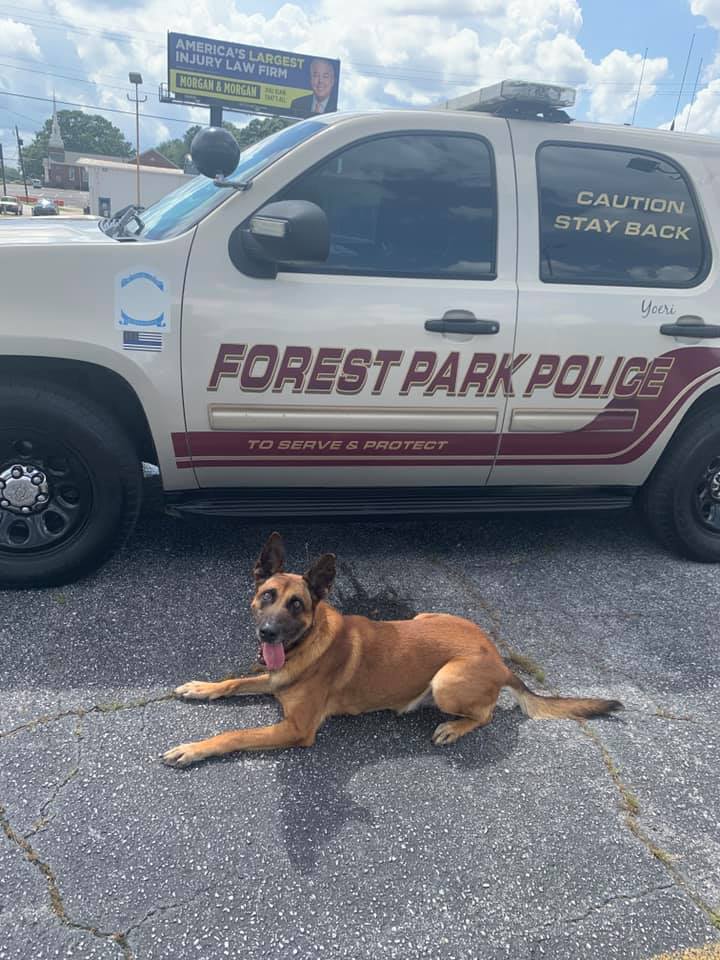 Gray: “I never got a return call” from Chief Clark

A second veterinarian hired by the City of Forest Park has recommended that K-9 Officer Yoeri be retired.

According to a Facebook post by Bring Yoeri Home, former Forest Park MPO Nathan Gray, the dog’s handler, was able to see K-9 Officer Yoeri today for the first time in weeks, and that the dog has been licking a swollen paw. A new photo Gray took sometime after 12:30 p.m. Monday shows the size of the outdoor run, where K-9 Yoeri has gotten his exercise for the past several weeks, is comparable in size to a dog crate (the dog also has access to an air conditioned and heated inside space):

It’s not clear whether Gray, who handled K-9 Officer Yoeri professionally for six years, would be able to take possession of him before the City Council meets to vote on whether Yoeri can retire. Gray resigned to take a civilian job. His last day was October 8.

City Manager Dr. Marc-Antonie Cooper had said the city was trying to determine whether or not the dog, which has been diagnosed with arthritis and at least one perineal hernia, might still able to serve.

The Clayton Crescent received an e-mail from Cooper dated Thursday evening, stating that “at no time has anyone stated or spoke about putting Yoeri down. That is not even a consideration for me. I want to ensure what is best for Yoeri, and that he has his proper vaccinations, medical treatment and the like, so we can do what is his best interest. If he is deemed to be aged out for retirement at that time Mr. Gray will have the first opportunity to adopt Yoeri.”

Cooper also told The Clayton Crescent that he has had Rottweilers.

On Friday, October 22, Gray told The Clayton Crescent that he and another Forest Park Police officer, Ofc. Yeh, had been giving the dog weekly enemas to avoid painful bowel movements as a result of the hernia.

The day before, Cooper had promised The Clayton Crescent that he would ask whether we could witness the visit, which he also had said he’d hoped to complete by the end of last week. Cooper did not return requests for confirmation of the appointment, but mentioned in his October 21 e-mail that “we have a vet appointment scheduled for the K-9 on Monday, October 25.” The city did not contact The Clayton Crescent to inform us of the time and conditions of the visit, nor has it identified who was present or the name of the veterinarian who examined K-9 Officer Yoeri today.

Earlier today, a person who reportedly is a former Forest Park Police officer posted a message on the front door of City Hall. The words SHAME and #FREEYOERI were written on blue tape and stuck to the door. The hashtag has spread on social media among people who want the city to retire the dog and give him to Gray. The story is drawing national attention.

Here’s an interview we did with Gray last week. The interview has been edited in order to remove references to K-9 Officer Yoeri’s location.

Both city officials and Gray have requested that The Clayton Crescent not disclose the location where K-9 Officer Yoeri is being held. The Clayton Crescent is not disclosing the location because it is not safe for untrained people to attempt to interact with K-9 Officer Yoeri (or police K-9 officers in general), as well as to prevent possible injury to the dog.

Police K-9s are working dogs, not pets, and they are trained to bite people. According to Gray, K-9 Officer Yoeri’s personality is such that he does not like to interact with strangers.

The City Council is set to meet Monday, Nov. 1–the day before municipal elections–but does have the power to convene a special called meeting before then to consider K-9 Officer Yoeri’s predicament.

“Once the physical is completed and results turned over I will be able to make a recommendation to council,” Cooper reiterated. “The issue is that if those responsible for Yoeri and his record keeping would have been forth coming with the requested documentation in the beginning we would never have had to go to these measures to ensure the truth around Yoeri and his health.”

Do you value watchdog reporting? Join The Clayton Crescent as a member at the monthly level that works for you. We suggest $20 but you can sign up for as little as $10 per month–less than the cost of most lunches in Clayton County. Your monthly membership or one-time gift is tax-deductible! Plus, you’re putting teeth in our ability to hold local government accountable to the people. Join now at donorbox.org/clayton-crescent. Thank you!