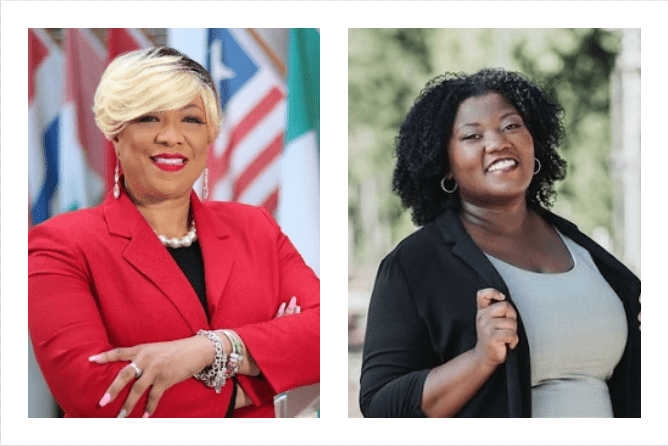 The polls are open in Board of Commissioners District 1 for the special election runoff between Dr. Alieka Anderson and Alaina Reaves.

District 1 includes most of the northeastern part of Clayton County east of Jonesboro Road and north of I-75, as well as Lake City and Morrow. It includes Conley, Ellenwood, Rex, part of unincorporated Jonesboro, the eastern side of Forest Park, and Fort Gillem. You can see and enlarge a PDF map of the district on the county’s website.

According to the Clayton County Elections and Registration office, District 1 has 43,992 registered voters–but only 2,362 voters cast ballots in the primary, which included ten candidates. Anderson got 924 votes and Reaves got 530. If today’s turnout is similar to the primary’s, that leaves about 908 votes up for grabs. (It is possible that more voters could turn out.)

Issues in the district include the number of warehouses versus the lack of mixed-use and retail development, as well as homeowners’ concerns about impacts on their property value and environmental concerns at several sites on and around the decommissioned Fort Gillem.

Anderson, who was endorsed by former Democratic Party of Georgia political director and pundit Dr. Rashad Richey, resigned from Clayton County School Board District 8 to run for the BOC seat. While on the school board, Anderson served as chair, vice-chair, and legislative liaison. She is the CEO of a startup charter school, Colin Powell Military Academy, and works in the Dekalb County Public School system as an instructional support specialist. She is a member of the Clayton County Community Services Board and has served on the Development Authority of Clayton County and the Housing Authority of Clayton County.

District 1 voters can cast ballot until 7 p.m. tonight (Tuesday, October 19). You must vote in your precinct, according to SB202, the new state election law. However, between 5 p.m. and 7 p.m., you are allowed to vote in a different precinct if you can’t get to your home precinct in time. The four locations where you can vote in the BOC District 1 race include:

You can check your voter registration status online at mvp.sps.ga.gov. If you have any issues voting, contact Clayton County Elections and Registration at (770) 477-3372 or elections@claytoncountyga.gov. If you witness “questionable election-related activity,” contact the Georgia Secretary of State’s Elections Office at (877) 725-9797 or submit an official complaint online.

The Clayton Crescent is a 501(c)(3) and a member of the Institute for Nonprofit News. We do not endorse candidates or campaigns. We engage in government oversight, regardless of who’s in office, and defend the public’s right to know in a timely fashion what its elected officials are doing. Join us in this effort by pledging $10, $20, or more per month at donorbox.org/clayton-crescent. We don’t waste one penny of your donation. (Can government say the same of your tax dollars?) Please tell your friends about our award-winning journalism–and thank you for your support!