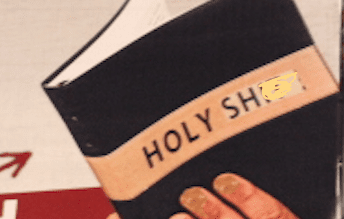 At first glance, you might not notice something’s changed.

Look again as you turn right off North Main Street onto the 7500 block of Tara Boulevard and you may get more than a little distracted.

A billboard placed by Christian Aid Ministries, an Ohio-based religious group, was vandalized sometime before the afternoon of Saturday, October 16. That’s when The Clayton Crescent first noticed it.

We called Clear Channel Communications, which owns the billboard, and they confirmed that no, they did not approve this message.

Craig Pritchard, who handles billboards in the area, said he’d only learned of the vandalism Monday afternoon, when the ministry e-mailed the company to let them know the phone number had been changed. Christian Aid Ministries has an adopt-a-billboard ministry, which asks individuals and churches to “adopt” one of their billboards for a donation.

“I’ve got a crew going out there in the morning,” he said. “It’ll be changed before daylight.”

We e-mailed a photo of the billboard, which Pritchard said was the “second worst” vandalism of its kind he’d seen. (We asked what number one was. “I don’t even want to tell you!” he replied.)

“It costs us,” Pritchard said. “Those vinyls aren’t cheap. We’ll give them another vinyl. Then we have to pay the crew to put it up.”

Pritchard said the kind of vandalism he deals with is mainly graffiti–maybe gang tags on a pole, once or twice a month, that his crew just paints over.

But this is different. Whoever it was went to a lot of trouble to pull off their prank.

“The thing is, the actual face of that thing is about 14 feet tall, okay? And there’s three feet between the catwalk that you’re walking on and the bottom of the base and the billboard,” Pritchard said. “Where they put the [the] ‘shit’ on there is, that’s about 11 feet up…Jiminy Christmas.” He said they might have used a ladder or a posting pole to paste up the lettering, which looks to have been professionally printed.

“‘Butt’ is the same size as ‘truth’,” Pritchard said. “It’s to scale. Everything is to scale!” he exclaimed.

It’s not yet clear how the vandal or vandals managed to paste over the existing billboard without anyone seeing them, or how they were able to figure out the correct sizes of the huge letters.

“They went through some effort to do all of that,” he said.

Besides the middle-school-level vulgarities that many Christians find deeply offensive enough without direct links to the Bible and Jesus, the vandalism also could cause a backlash against LGBTQ people, particularly gay men, if they are blamed for the content of the message.

It turns out that Christian Aid Ministries, which has several billboards around metro Atlanta, is the ministry whose members were taken hostage in Haiti, Pritchard said. Conditions are so desperate in Haiti that gangs regularly kidnap people by the busload, then try to extort ransom for the hostages’ release.

A gang called 400 Mwozo captured 17 members on Saturday, according to The Washington Post. The group–mainly Amish and Mennonites–issued a recorded prayer request, saying its people were coming back from an orphanage when they were abducted by an armed gang. A few other missionaries remained in Titanyen, a town about 12 miles north of Port-au-Prince.

The Post noted that, in 2019, a member of the ministry, who reportedly had admitted to sexually abusing minors in the U.S., was allowed to work in Haiti and was later accused of assaulting minors there. The ministry settled out of court in 2020.

It’s not clear whether the billboard incident, the abuse allegations, and the kidnapping are related, other than the fact that they all involved Christian Aid Ministries.

A Clayton County Police spokesman said Monday night that he had not heard of any complaints filed about the billboard but promised to look into the matter Tuesday.