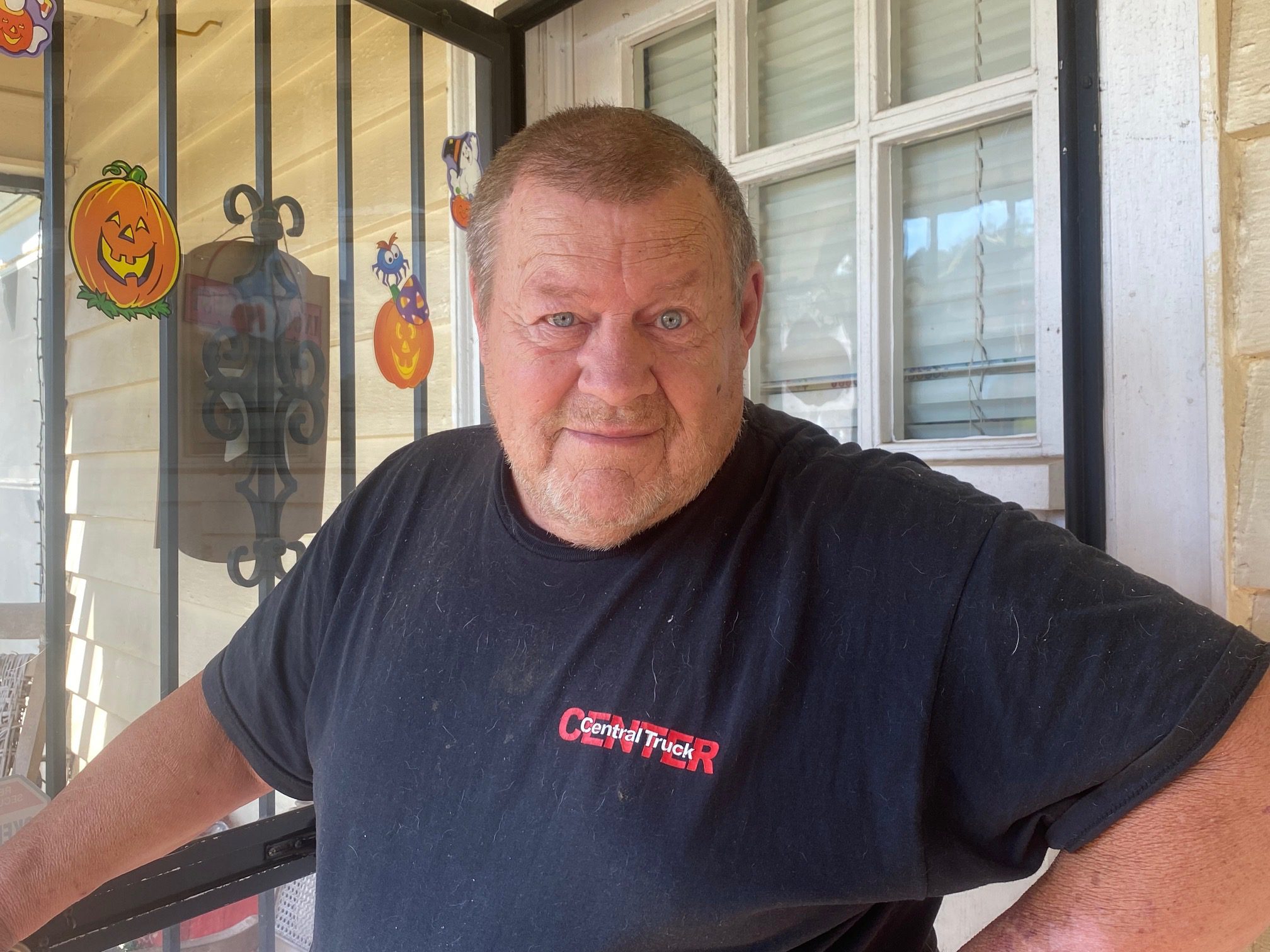 CORRECTION: City Manager S. Diane White is in charge of elections; Intact Consulting serves as a consultant only.

A voter in Forest Park says his paper absentee ballot arrived with the wrong ward on it.

Robert Gallagher, who has lived on Forest Avenue in Ward 2 for eight years, says his absentee ballot incorrectly showed him as living in Ward 1.

Gallagher pulled out his voter registration cards to prove it.

In the upper left hand corner, he pointed out his precinct for county, state, and federal elections, which is FP1. Then he pointed to the lower right hand corner, which indicates the ward he lives in for city elections. That shows the numeral 2, which corresponds to Ward 2.

He also put a sign for a Ward 2 City Council candidate, Cliff Pellegrine, in his front yard–something a voter in Ward 1 would be unlikely to do:

Gallagher said he called City Hall to inquire and that someone named Mary told him, “We have to check with Planning, Building and Zoning.”

“Why would you need to do that?” Gallagher asked. “You have the ward map right there. The city map shows me in Ward 2, in the blue. Ward 1 is way over there.”

The ward boundaries have not changed since the last election. He hasn’t been able to vote yet.

Gallagher said he didn’t know whether anyone else had had the same problem, “but I bet there’s a whole bunch….When I talk to her, it’s like I’m beginning the process of a runaround, you know–‘well, I’ll keep checking and I;’l let you know, call you back and let you know.'”

He said he called the Secretary of State’s office. “They called the city, the city called me back, and–no, no, no, You’re starting the runaround stuff.”

Gallagher added, “I think they might have some temporaries or something.”

The Clayton Crescent went to City Hall to ask whether other Forest Park voters also had received incorrect ward locations on their absentee ballots. After some time, a city staffer said the person who could answer that question was not around but was probably down at the polling place.

Mayor Angelyne Butler and Ward 1 City Council candidate Trudy Smith were campaigning nearby with some of their people. We asked them whether they had heard about the incorrect absentee ballot. Neither had.

Butler said the city would ensure voters’ ballots were protected, said, “I’m on it,” and made a phone call.

We also e-mailed Clayton County Elections and Registration Superintendent Shauna Dozier and called the Georgia Secretary of State’s Office to find out whether they had heard of the incorrectly-printed ballot–and whether the problem might affect voters in other municipalities. Dozier replied, “The City of Forest Park is conducting the City of Forest Park’s elections.”

The city had contracted with a company owned by Marcia Ridley, Intact Consulting, as a consultant to the city for the municipal elections. (City Clerk S. Diane White serves as election supervisor.) Ridley came under fire for her handling of the November 3, 2020 election as Spalding County’s elections supervisor. On August 18, the State Elections Board referred Ridley to State Attorney General Chris Carr’s office for alleged mishandling of election supplies in Spalding County. In particular, Ridley faces allegations that paperwork with voters’ information was tossed into a dumpster.

At 4:23 p.m., Gallagher sent this e-mail: “I just wanted to let you know. That after our short discussion about my Ballot situation, and you going to see what information you could get from the City Clerk about it, you must have hit a nerve, as within a very short time, the Clerk’s office called and told me that they had found the mistake and will be mailing me the proper Ballot today. Thank you for your assistance.”

If you receive an advance/absentee ballot in the mail, take the time to check it carefully before using it. Make certain that it shows your correct voting information, including the precinct where you vote, the ward or commission district where you live, and that you know where the correct precinct is for you to vote. (In Forest Park, early voting for both the municipal election and the county District 1 runoff are taking place at the Senior Center next to the stadium in Starr Park.)

If you see a discrepancy, notify your municipal elections clerk if it’s a local election, the Clayton County Board of Elections and Registration if it’s a county, state, or federal election, and the Georgia Secretary of State’s Elections Office. You also can contact nonpartisan voting rights organizations like the League of Women Voters.

And be sure to let The Clayton Crescent know about any issues you might experience with voting. We’ll look into it.