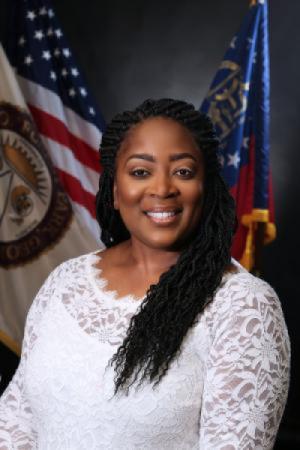 Butler: “Get on, get out the way, or get run over”

In her second State of the City address, Forest Park Mayor Angelyne Butler framed the civic duties of her administration in terms of spiritual warfare. And she issued an apocalyptic warning to her political enemies: get on board or suffer the consequences.

The most important parts of the hour-long address included projected revenue of $67 million over the next 20 years from Gillem Logistics Center and an economic impact of over $1 billion. The address said nothing about environmental concerns on site and in neighborhoods surrounding the former Fort Gillem.

Butler announced a program for homeowners to get up to $7,000 for necessary home repairs, a move that could go a long way to upgrading the city’s existing housing stock. She also revealed the three-story “Park View” development, which will overlook Starr Park and feature a rooftop balcony.

Butler also announced that the city has hired its first public information officer.

With early voting in progress and the municipal election less than a month away, Butler’s address doubled as a stump speech. About 100 people turned out for the address. Most of those present were elected officials, city employees, family and friends, and members of two churches. Among those present: Clayton Chairman Jeff Turner and his wife, Darlene; District 4 Commissioner DeMont Davis; and State Rep. Kim Schofield, as well as Ward 5 Councilman Allan Mears and his wife, Cindy; Ward 1 Councilwoman Kimberly James; and former City Councilwoman Sparkle K. Adams.

“It is because of accountability, a common vision, integrity, and transparency,” Butler said, “that I promise we’ll move the city into the 21st century, and friends, that is exactly what we are doing.”

Here is Butler’s speech in full:

In June 2019, Butler used the State of the City address to announce a hotel for Main Street and a film studio. Recently, the city signed a purchase agreement with Blue Star Studios to build a facility at Gillem. The city released the document after The Clayton Crescent filed an Open Records Request, but it redacted the name of the person signing the contract. Blue Star Studios is part of Blue Star SM, which is a Delaware corporation. The University of Georgia Law First Amendment Clinic is looking into why the city redacted the printed name of the person who signed the agreement. Butler did not mention Blue Star Studios during the address.