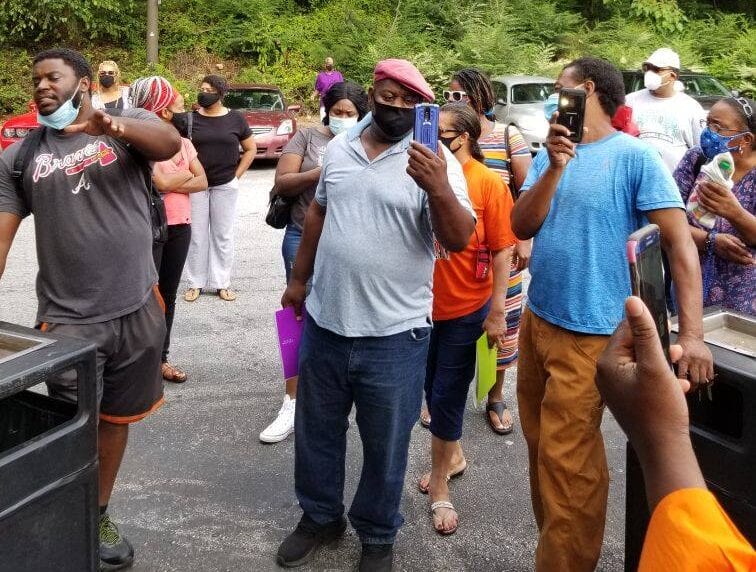 Burnough: “We are not going to sit back and sing ‘Kumbaya'”

Members of the Clayton County legislative delegation say they are “disappointed” and “insulted” by a proposed nondisclosure agreement that Georgia Department of Labor would require them to sign in exchange for access to constituents’ unemployment insurance information and are calling for a federal investigation into the department.

Legislators say the proposed agreement would keep them from using data to create legislation, accessing data during legislative session, limit their ability to help constituents who need help with unemployment claims, and makes legislators responsible for any data breaches. They also say It could prevent legislators and staffers from communicating their findings to government investigators.

In addition, data covered by a proposed nondisclosure agreement would prevent the legislators from communicating their finding to the news media or the general public, including their constituents.

The move comes after GDOL offices shut down all public access during the COVID-19 pandemic. Those offices remain closed more than a year later. During that time, Labor Commissioner Mark Butler has not responded to The Clayton Crescent’s requests for comment. Legislators say many constituents have yet to receive unemployment benefits or status updates on their claims.

The legislators are calling on GDOL to pause the pilot program, in which Scott had taken part.

“I find it insulting that the commissioner, who is an elected official like us, would now want to shift the responsibility for unemployment claims to the legislators,” Burnough said. “Legislators have tried to work with him over the past two years to resolve unemployment claims, and now he wants us to work together. This Legislator Portal would be an insult to all those Georgians who lost their jobs through no fault of their own. We are not going to sit back and sing ‘Kumbaya.’ We are going to continue to push for a federal investigation of the GDOL.”

The data in question includes personally identifying information (PII), including:

The proposed agreement also would put the responsibility on state office holders for training staff and enforcing security, and well as any data breaches.

“The labor commissioner and his department are placing the unemployment crisis on legislators,” Beverly said. “By signing the Legislator Portal Access agreement form, legislators will be forced into this unfortunate catastrophe. Instead of dealing with this crisis, the commissioner continues to avoid the necessary steps to support Georgians facing financial hardships. GDOL’s Legislator Portal Access agreement limits what data legislators may disclose to the public and puts Georgians at greater risk with unemployment insurance.”

Schofield placed the blame on Butler’s “latest attempt to shift his responsibility to legislators confirms his inability to effectively govern and lead the Georgia Department of Labor.”

“For over a year and a half, legislators have provided assistance and support to help Georgians recover their GDOL benefits, resolve claims and appeals,” Schofield said. “The lack of transparency and accountability by the GDOL further exacerbated the stress and contributed to grave personal and financial losses due to the COVID-19 pandemic. The dereliction of duties by GDOL leadership and rejection of common sense solutions offered to its commissioner has greatly impacted families and communities across the state of Georgia.”

Since the beginning of the COVID-19 pandemic, which triggered widespread layoffs and business closures, Georgia House Democrats on the Subcommittee on COVID-19 have been documenting constituents’ complaints about GODOL’s unresponsiveness to their concerns about unemployment benefits, collecting data in a spreadsheet, insisting that Butler meet with them, and calling for federal investigations.

Davis added, “The Georgia Department of Labor continues to fail Georgians. The lack of response to unemployment insurance claims, a failed unemployment insurance system that cost $50 million dollars and silencing legislators by way of the Legislator Portal Access agreement form will limit state legislative oversight. It’s time for the labor commissioner to take the necessary steps to move Georgia forward and tackle the financial hardships Georgians continue to face.”

Scott said, “I am extremely disappointed that Georgia’s labor department would have legislators jump through hoops in order to assist their constituents. If the labor commissioner refuses to work with the elected officials chosen by the people of Georgia, he may want to reconsider his position as the head of this agency.”

If an attorney, court, journalist, or citizen were to seek data (for example, through a subpoena or an Open Records Act request), the proposed agreement would mandate that legislators refer that request “to GDOL’s UI Integrity for instructions in accordance with the terms of the Agreement to which this Exhibit pertains, and no formal or informal response or release of Data shall take place before GDOL has had both a reasonable opportunity to review and to respond to such legal process, as more fully described and proved [sic] for in the Agreement to which this Exhibit pertains.”

The Clayton Crescent has forwarded a copy of the agreement to the Georgia First Amendment Foundation and the UGA Law First Amendment Clinic. We’ll update with their responses.

The Clayton Crescent has asked Butler to comment on the legislators’ letter. We will update with his response.

Butler did speak with WABE’s Rose Scott in December 2020 about the challenges his office faced as a result of COVID-19. Listen to the interview on “Closer Look with Rose Scott.”

In October, Butler said the subcommittee’s efforts were a political ploy.

“Georgia, like every state in the nation, has worked to process record-setting numbers of unemployment claims over the past six months while also building and implementing four separate programs conceived by Congress and the White House to address millions of individuals that have never been part of the UI program,” Butler said. “Instead of constantly criticizing the work of the men and women of the Georgia Department of Labor, these legislators should be praising the work of these individuals who have been working diligently to issue over $15 billion in benefit payments at great sacrifice to themselves and their families. This agency was given the task of delivering almost 80 percent of all the financial relief that was presented in the CARES Act legislation and has done so successfully operating 7 days a week since the middle of March.”