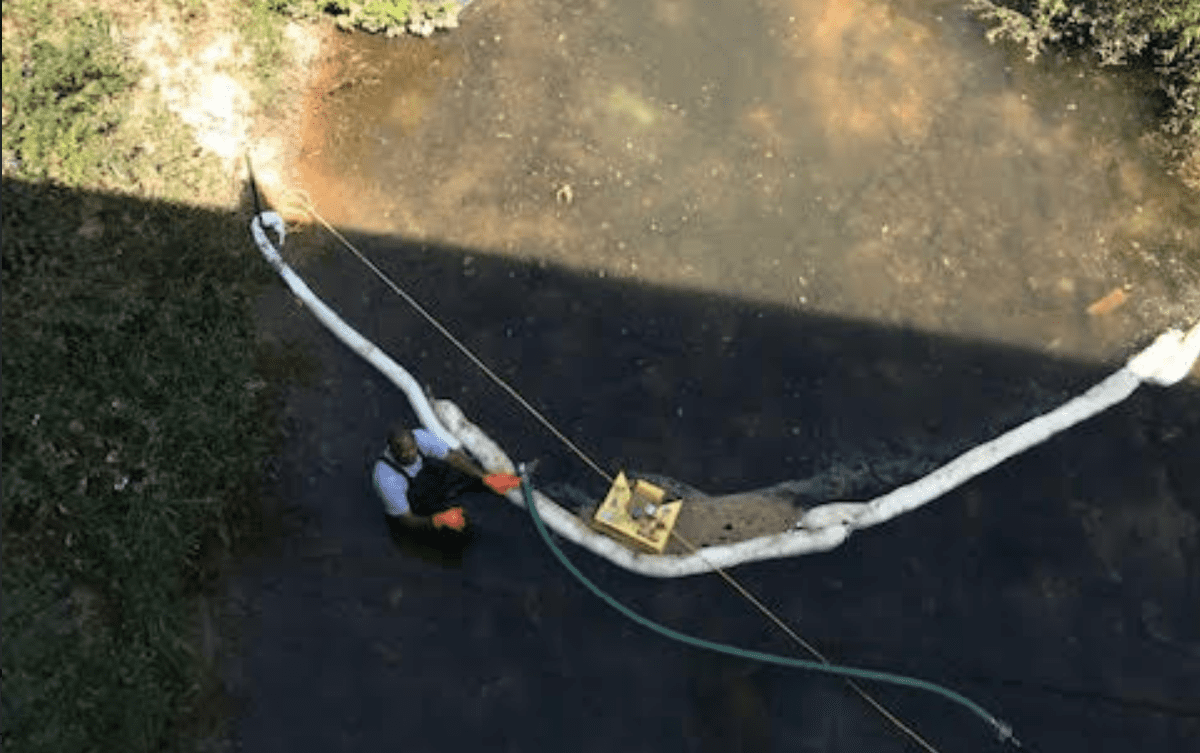 A 700-gallon fuel spill has killed fish and contaminated the Flint River at the intersection of Clark Howell Highway and Forest Parkway.

A U.S. Environmental Protection Agency truck was on scene Wednesday evening around 6 p.m. A man responding to the spill said he was too busy to talk and referred The Clayton Crescent to EPA District 4’s spokesperson.

A strong odor was still apparent at the site. A black hose snaked through tall weeds and down towards the area below the bridge, just outside the fence surrounding Hartsfield-Jackson Atlanta International Airport. Absorbent boom material for containing spills also was on the site.

The airport sent this statement to The Clayton Crescent:

“Shortly after midnight, Sunday September 26, a fuel spill was reported on the ramp adjacent to gate C-14 at Hartsfield-Jackson Atlanta International Airport. ATL Operations teams, aircraft rescue and firefighting teams, and the firm that manages two of the Airport’s fuel farms, Louis Berger, responded to the emergency and immediately began mitigation efforts including the deployment of booms and oil absorbent material.  ATL also deployed environmental personnel to monitor the nearby Flint River. Normal operations resumed at the airport by 3:30 p.m Sunday. Early Monday morning, evidence of a fuel spill into the Flint River led Louis Berger to supervise mitigation efforts on the river near the Forest Parkway/Clark Howell Road area. Preliminary estimates determined approximately 700 gallons of Jet A-1 type aviation fuel spilled onto the ramp. An investigation into the cause of the incident is ongoing. State and federal environmental agencies have been informed.”

The AJC’s Kelly Yamounouchi, who covers the airport, spoke with the EPA earlier today and reported that a contractor had spilled 400 gallons of jet fuel on Concourse C. Some of that went down a storm drain, according to Georgia DNR, and the spill was reported to Georgia Department of Natural Resources on Sunday: “The agency said environmental restoration crews are on the Flint River using absorbent pads and barriers to contain the spread of the fuel. Vacuum trucks are also on site.”

Although the airport does have considerable economic impact on metro Atlanta, Clayton County has had a long, vexed relationship with the airport over jet fuel:

Finding the Flint’s Hannah Palmer, who has been working with area planners, the airport, and local residents on making the river more accessible to the public, photographed booms and absorbent pads floating on the Flint’s surface:

Flint Riverkeeper, which focuses on the entire Flint River, said, “We agree with our friends in the uppermost Flint: the professional response to this spill appears appropriate & robust, but is this really the best we can do? This happened when it was not raining. Isn’t there a way to stop a spill before it gets to the Flint, or a tributary of the Flint?”

The Real Story with Robin Kemp

Listen to Hannah Palmer on Finding the Flint

The spill comes as Finding the Flint works to reconnect Clayton County residents with their river, which is Georgia’s second-longest and a major tributary of the Apalachicola River, ultimately flowing into Apalachicola Bay and the Gulf of Mexico.

In April, the Supreme Court threw out Florida’s case against Georgia using too much water–part of the long-running “Water Wars”–saying Florida had not shown our consumption upstream had had an impact on its Apalachicola Bay oysters and river life. The Apalachicola River has run low in recent years. Without that fresh water flowing in, Florida said, the bay got too salty for its famous oysters to live.

Back in Clayton County on September 18, dozens of volunteers, including schoolchildren, met at Clayton State University to learn how to take water samples from the Flint. Despite rainy weather, the citizen scientists said they were excited to wade into their local river:

The National Oceanic and Atmospheric Administration says jet fuel can kill aquatic life throughout the water column if organisms come in direct contact with it. While “small spills in open water may not result in fish kills,” according to NOAA, “[f]ish kills may occur for small spills in confined, shallow water and in streams, where weathering and mixing are reduced. Fish and invertebrates in small streams can be affected for miles downstream of a jet fuel release into the water.”

With local residents’ renewed interest in the Flint River, the timing of the spill is

We’ll follow up with more information as it becomes available. If you see any signs of pollution on the river or in area waterways, contact Georgia Environmental Protection Division’s Watershed Protection Branch, then let us know at (404) 547-1171 or editor@claytoncrescent.org.