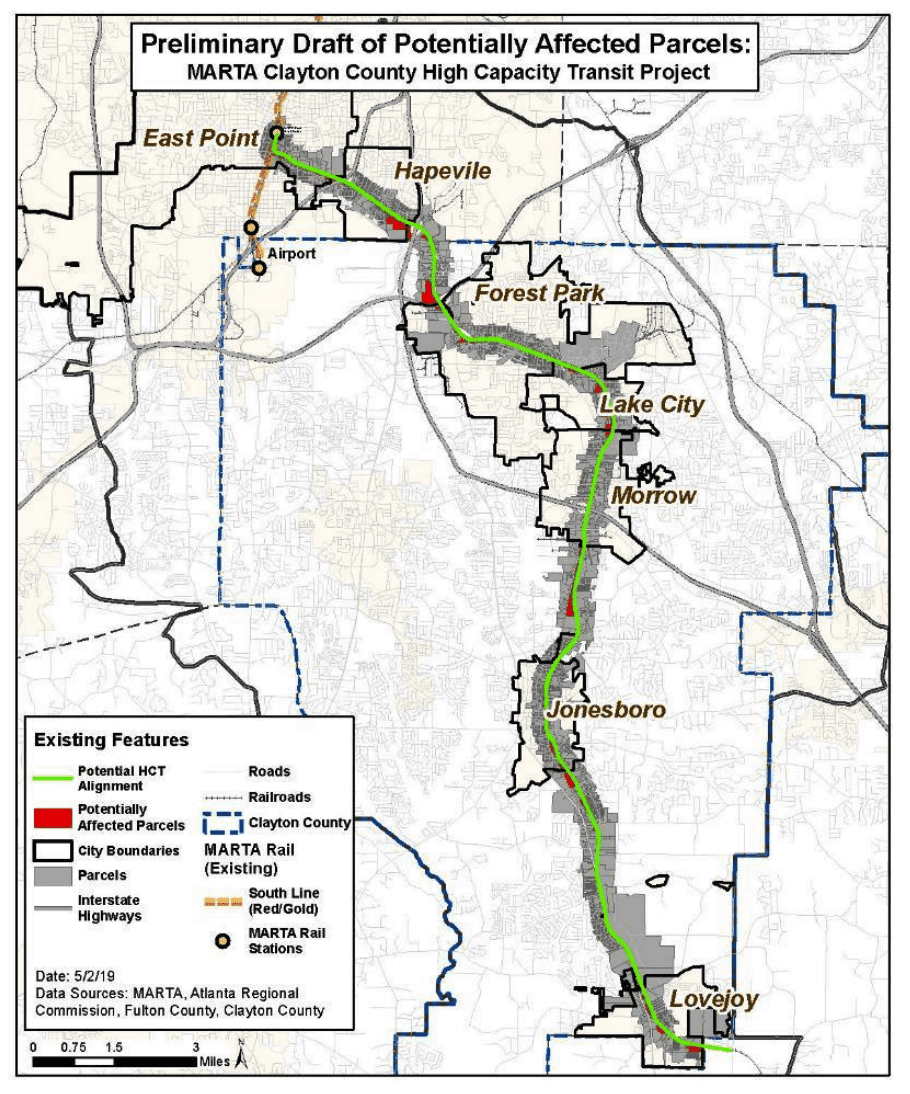 Efforts to bring commuter rail to Clayton County are all but derailed, according to MARTA officials who held a briefing Wednesday afternoon.

The project, which was envisioned two decades ago as a state urban rail corridor linking Macon and Atlanta, evolved over the years under C-TRAN and MARTA. Now, planners say, studies show commuter rail would cost too much money, move too few people, impact the environment and historic structures, and demand too many right-of-way concessions from property owners, particularly along Georgia Hwy. 54.

Norfolk Southern Railway was unwilling to make concessions to MARTA, either to share the existing track or to allow a parallel track alongside. The two sets of tracks would need 26 feet of separation–an extremely difficult proposition in certain spots along the existing railbed.

In addition, Norfolk Southern reportedly wants to keep its options open, given the growth of shipping traffic into and out of Clayton County.

To top it all off, the cost per rider would be $50 to $104 and serve fewer riders. That makes commuter rail in Clayton County a “medium low” quality project for federal funding, which generally goes to projects rated “medium” or “high.” That medium-low rating makes the project uncompetitive against those in other cities around the United States.

The SPLOST penny dedicated to transportation funding has about $150 million for development. The proposed commuter rail project would cost about $2.3 billion.

The proposed commuter rail line would run from East Point Station to Lovejoy along Ga. Highway 54. While the presentation indicated the commuter rail project is all but dead, MARTA’s Board of Directors would have to vote on the matter, and MARTA has a contract with the Clayton County Board of Commissioners that likely would require further amendments.

However, the news is not all bad.

As an alternative, MARTA planners say a bus rapid transit project along State Route 54 would cost less per rider ($8), run more routes more often, open the door to transit-oriented developments and 17 stations, and give MARTA the chance to work with Georgia Department of Transportation on planning dedicated lanes.

Here’s the slideshow that MARTA is presenting to the municipalities (Jonesboro’s Mayor Joy Day and Morrow’s Mayor John Lampl had not yet been briefed, according to MARTA):

Slides 21 through 23 show the northbound view of Georgia Hwy. 54 at the Mt. Zion Road rail crossing. On the lower left is the Sherwin-Williams plant. Adding a dedicated commuter rail line would require the purchase or condemnation of the areas in red. These overlap the rights-of-way and cross into the parking lots of Sherwin-Williams, various retail properties on the southbound side, and the Quality Inn. On the northbound side, it also would take over the existing service road. The whole thing would require a new bridge over I-75, as well.

Before the meeting, The Clayton Crescent spoke with Chairman Jeff Turner, who confirmed that MARTA is still negotiating with Norfolk Southern for access. Turner said the effort “isn’t going well.”

“The alternative is to build a parallel line next to theirs which would be costly and we would have to buy up a lot of right-a-way,” Turner said., “So, technically the project is still alive but contingent on a number of factors.”

Forest Park City Manager Dr. Marc-Antonie Cooper said a big part of revitalization efforts there “would be the development of a ‘transit village’ and associated commuter rail station, a linear transit connection across the city, with an emphasis on pedestrian-friendly infill development, and health/quality of life improvements such as streetscapes, parks, and landscaping. The citizens of Clayton County, which includes our city, committed themselves to this, and I can say that Mayor Angelyne Butler and our City Council stands committed to contributing what we can to make this work.”

As of press time, The Clayton Crescent needs 12 civic-minded people to join us at a tax-deductible $10 per month (or for a one-time annual gift of $100) by Friday, September 17 so that we can meet a $3,000 matching gift challenge. We’ve been here for you since April 2020. This award-winning news service is possible through the gifts of generous readers like you. Give now at https://donorbox.org/clayton-crescent — be sure to choose the “Monthly” tab — and thank you!