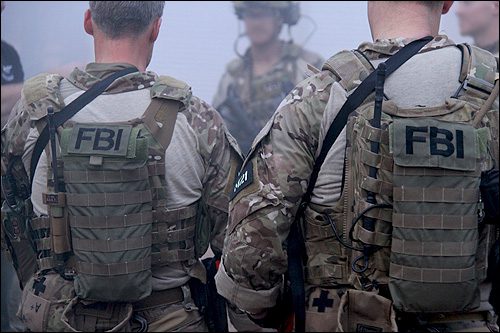 The move comes in the wake of the George Floyd verdict, as well as other excessive-force incidents around the nation (including Desmond Marrow in Henry County, where former HCPD Ofc. David Rose eventually pleaded guilty and lost his police certification) in which law enforcement officers used carotid restraints and chokeholds.

By “deadly force,” the Justice Department means “when the officer has a reasonable belief that the subject of such force poses an imminent danger of death or serious physical injury to the officer or to another person.”

Most of the time, federal agents are required to “knock and announce” who they are, under what authority, why they’re there when executing a warrant at someone’s home. Sometimes, however, federal agents can kick down the door without notice.

Under the new policy–which is stricter than what the law allows–a federal agent can execute a no-knock warrant only when the agent “has reasonable grounds to believe that knocking and announcing the agent’s presence would create an imminent threat of physical violence to the agent and/or another person,” according to the Justice Department.

If an agent seeks a no-knock warrant due to a suspected physical threat, both a federal prosecutor and the agent’s supervisor must sign off in advance. In rare cases, if a no-knock warrant is sought where no physical threat is imminent, the agent has to get permission from both their agency head and the U.S. Attorney or the relevant Assistant Attorney General before asking a judge to authorize it.

In addition, the head of each federal law enforcement agency is now required to file with the Deputy Attorney General quarterly reports of the number of no-knock entries their agency executes.

“Building trust and confidence between law enforcement and the public we serve is central to our mission at the Justice Department,” said Attorney General Merrick B. Garland. “The limitations implemented today on the use of ‘chokeholds,’ ‘carotid restraints’ and ‘no-knock’ warrants, combined with our recent expansion of body-worn cameras to DOJ’s federal agents, are among the important steps the department is taking to improve law enforcement safety and accountability.”

“As members of federal law enforcement, we have a shared obligation to lead by example in a way that engenders the trust and confidence of the communities we serve,” Monaco said. “It is essential that law enforcement across the Department of Justice adhere to a single set of standards when it comes to ‘chokeholds,’ ‘carotid restraints’ and ‘no-knock’ entries. This new policy does just that and limits the circumstances in which these techniques can be used.”

Help The Clayton Crescent keep you informed! Your monthly recurring gift of at least $10 per month will be matched by a generous donor. As of press time, we need 19 more new members to sign up by Friday, September 17. Join us at https://donorbox.org/clayton-crescent — and please be sure to choose the “Monthly” tab. Thank you!