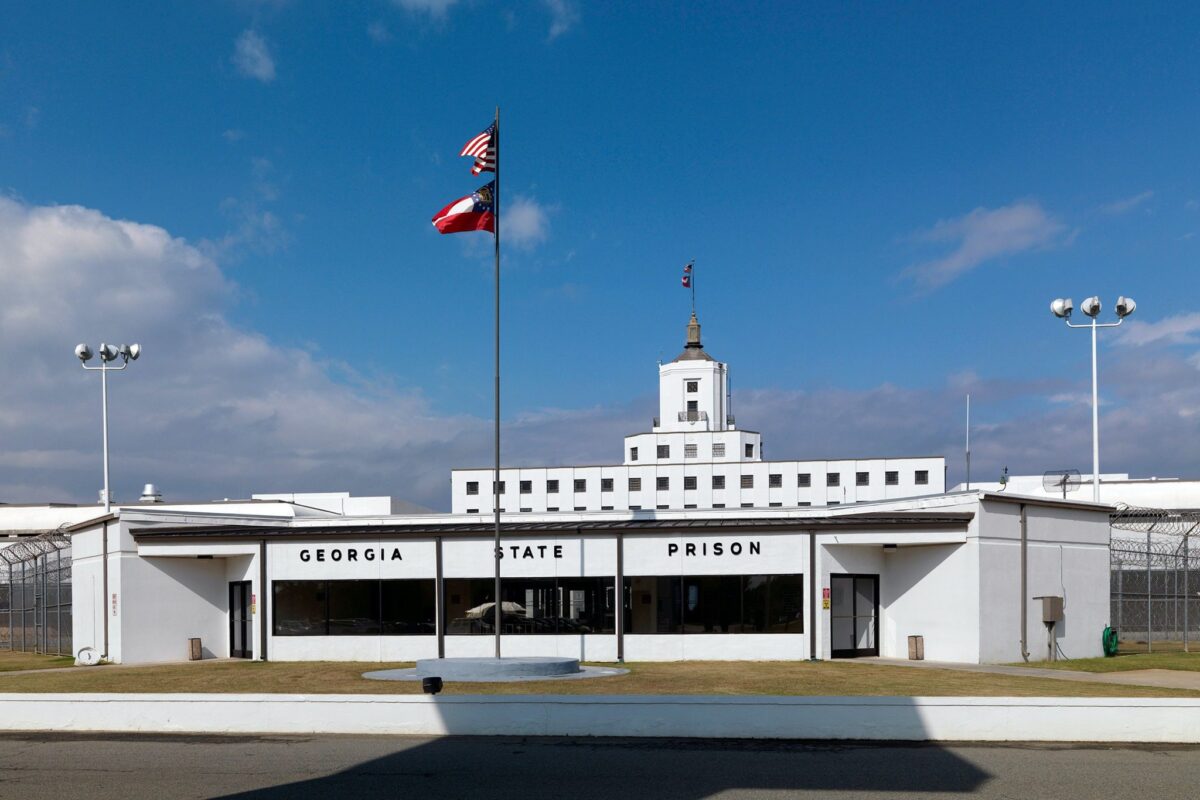 The U.S. Department of Justice is investigating sexual abuse of LGBTQ+ prisoners in Georgia, as well as violence between prisoners in general.

Since 2020, when the pandemic began, at least 44 known or suspected homicides have been reported in Georgia Department of Corrections facilities. In 2020, Georgia DOC issues 17 press releases announcing inmate deaths under investigation. George Chidi wrote about the state’s prison guard shortage in The Intercept. And an 11 Alive investigation found at least 29 inmates committed suicide in Georgia prisons in 2020.

The announcement comes after the Southern Center for Human Rights filed a federal class action complaint Friday, on behalf of three prisoners and others in their situation, against officials at the Georgia Department of Corrections and Georgia State Prison.

The suit alleges solitary confinement conditions at Georgia State Prison are not only inhumane but also aggravate the conditions of severely mentally-ill prisoners held there. According to the complaint, severely mentally-ill prisoners are locked up 23 hours a day for 270 days at a time or more–nearly nine months–in vermin-infested cells, with almost no human contact, and given five hours of “recreation” in a locked cage each week, as an “incentive” to behave better. The complaint alleges that 70 percent of staff positions are vacant, which means no one can take the men to the showers or infirmary. The men are left standing “for extended periods of time” in locked shower stalls “or telephone-booth-sized cages–without food, water, or access to a toilet.” There, they “pass out and vomit from excessive heat exposure” and are left in their own vomit, urine, and feces “for hours or days.” Rats, mice, and cockroaches run wild: “It is common for men in GSP’s solitary confinement cells to see more than 10 rats crawl across their floors, lockers, sinks, toilets, and beds in a single day. The rats enter the cells through vents, holes in the wall, and the small space between the cell doors and the floor….rats crawl on the men’s trays…They crawl on people while they eat and while they sleep. They find their way into people’s shoes and clothing….squealing through the vents, preventing [prisoners] from sleeping.”

This drives some of them over the edge, SCHR said: “Due to the chronic rat infestation, many men experience the constant sensation of rats sitting or crawling on their bodies.”

In the Acute Care Unit, a psychiatric isolation unit, prisoners having mental health crises “can expect to be held naked, for days or weeks, with no toothpaste, soap, or toilet paper, The ACU cells are infested with rats and their walls and surfaces are often smattered with feces and blood.”

Yet, SCHR alleges, Georgia DOC has done nothing about conditions there.

The litany of horrors alleged in the complaint runs 77 pages long:

Last year, the Southern Center for Human Rights asked the Justice Department to investigate prison conditions in Georgia since the COVID-19 pandemic, citing a riot at Ware State Prison; 21 homicides–including 6 at Macon State Prison–and 19 suicides, 30% of which took place at Georgia State Prison–as of last September; and extreme understaffing. SCHR wrote, “Former officers from Ware State Prison report that as few as six security staff members are often asked to supervise a prison housing over 1,000 men.”

At Georgia State Prison, which serves mentally-ill inmates, SCHR describes hellish conditions where rats and roaches crawl all over inmates while they sleep. On March 2, Georgia DOC announced it had fired six staffers “for their role in a use-of-force incident following an inmate assault on a fellow Correctional Officer.” The officers–Javaka Johnson, Anisha Majette, Marquette Sistrunk, Danny Standard, Korbin Tippett, and Kiara Cain–were fired, arrested, and charged with aggravated battery and violation of oath of office. The inmate, Norman Simpson, was charged with aggravated battery, aggravated assault, felony obstruction, and possession of a weapon during the commission of a crime.

U.S. Assistant Attorney General Kristen Clarke said Tuesday, “Under the Eighth Amendment of our Constitution, those who have been convicted of crimes and sentenced to serve time in prisons must never be subjected to cruel and unusual punishments. We must ensure the inherent human dignity and worth of everyone, including people who are incarcerated.”

Clarke said a combination of staff shortages, lack of training and accountability, and weak policies are contributing to the problem.

Acting U.S. Attorney Peter D. Leary for the Middle District of Georgia said, “Prison conditions that enable inmates to engage in dangerous and even deadly activity is an injustice, jeopardizing the lives of detainees, staff members and other corrections personnel. Our local law enforcement and corrections partners, with whom we work with closely each and every day, are indispensable to our united goal of achieving a safer Georgia for all.”

The investigation will be conducted under the Civil Rights of Institutionalized Persons Act, which allows the Justice Department to have the authority to investigate if any violations of prisoners’ constitutional rights are the result of a  “pattern or practice of resistance to the full enjoyment of such rights.”

According to the group Just Detention International, LGBTQ+ people are at high risk of sexual abuse and harassment in prison settings, and that homophobic attitudes play a large part in that abuse: “In men’s facilities, for example, it is common for staff and prisoners alike to believe that gay men, transgender women, and anyone who is perceived as “feminine” should expect to be sexually abused. In women’s prisons, lesbians and gender nonconforming women are singled out for staff sexual abuse and punishment. Too often, corrections staff blame LGBT victims for being sexually abused, and respond with indifference or hostility to survivors who ask for help. One survivor in a Texas state prison who asked staff for protection was told, ‘You’re an admitted homosexual. You can’t be raped. We’re denying your request. Learn how to defend yourself.'”

JDI says that transgender women, “who are almost always held in men’s facilities, are especially vulnerable. Even those who are not raped face constant abuse and harassment. In many prisons, staff deliberately humiliate transgender people by conducting strip searches in front of other prisoners, mocking their bodies, or refusing to call them by their correct names. Sarah, a transgender woman held in a men’s prison, is a case in point: ‘The prison personnel denied me a razor so I could have a “manly” beard. They harassed me with sexual slurs, and chanted “mister” at me. They constantly told me that I have a penis, while calling me John.'”

According to the federal Bureau of Justice Statistics, one of every eight LGBTQ+ prisoners are sexually abused by other inmates.

Listen to the testimony of the late Bryson Martel, a gay man who was raped 27 times in nine months and contracted HIV while serving nine months for forgery in Arkansas. His crime: writing a hot check to feed his crack addiction. Martel died in 2010.

Georgia Department of Corrections spokesperson Lori Benoit responded, “The GDC is committed to the safety of all of the offenders in its custody and denies that it has engaged in a pattern or practice of violating their civil rights or failing to protect them from harm due to violence. This commitment includes the protection of lesbian, gay, bisexual, transgender, and intersex (LGBTI) prisoners from sexual harassment, sexual abuse, and sexual assault. We cooperated fully with the USDOJ’s initial investigation in 2016 and are proud of the service and dedication of our team since then to perform during unprecedented challenges.”

We’ve asked again for more specific information about LGBTQ+ prisoners in state custody, how many of them have been homicide victims, how many had reported PREA violations, and how many of those violations were substantiated. We will update with additional information.

Eleven cases of Georgia prison staff sexually abusing inmates were substantiated. All 11 were sent to district attorneys for review and all 11 were fired or resigned.

Another four Georgia prison staff accused of sexually harassing inmates through inappropriate requests, touching, contact, exposure, or threats also were sent to district attorneys for review. All four of those employees also quit or were fired.

In five cases of substantiated inmate-on-inmate sexual harassment, “housing changes were made where necessary, to ensure the safety of the victim,” the report noted.

Fifteen substantiated cases of inmate-on-inmate rape were sent to district attorneys for prosecution.

In four substantiated cases of inappropriate touching, “the aggressor was subject to administrative sanctions through the disciplinary process. Offender housing changes were made as necessary to ensure the safety of the victim.”

Since 2013, only a fraction of cases have been substantiated.

Nowhere in the report does the acronym “LGBTQ” appear.

Clayton County Correctional Institute in Lovejoy, a medium-security facility for adult male felons, reported two allegations of staff-inmate harassment in 2020. Both claims were declared unfounded. We’ve asked Warden Dennis Nelson, who spoke extensively with The Clayton Crescent about COVID-19 measures at the prison in 2020, for more information about PREA reporting and how the COVID-19 situation is this year. You can listen to that interview here:

Atlanta Transitional Center, also in Atlanta, is a minimum-security facility housing adult male felons transitioning back to society. In 2020, one allegation of staff-inmate abuse was reported, but declared unsubstantiated.

Here are the numbers, by facility, for 2020 (turn phone sideways for better mobile viewing):

Georgia DOC said that “substantiated cases decreased by 32%” and allegations were down 3% as compared to 2019. The agency attributed this to increased education, “a significant decrease in the use of the PREA Hotline to report false allegations,” and improved training and investigative procedures. However, “Systematically, audits are showing a concern with the quality of our investigations” and “inconsistencies have been identified in facilities with offering follow-up counseling to prior victims, nor prior aggressors.” Issues with tracking were noted.

Anyone with information that would help with the investigation is asked to call the Justice Department at (844) 401-3736 or e-mail Community.GeorgiaDOC@usdoj.gov.

If you or someone you know has suffered sexual abuse in a Georgia prison, Just Detention International has resources where you can seek counseling, file complaints, and seek legal assistance. These include:

“Stories from Inside: Prisoner Rape and the War on Drugs” contains the testimonies of men and women who were raped while being held in prison. It was published by Stop Prisoner Rape.

What if you have no place to get warm?