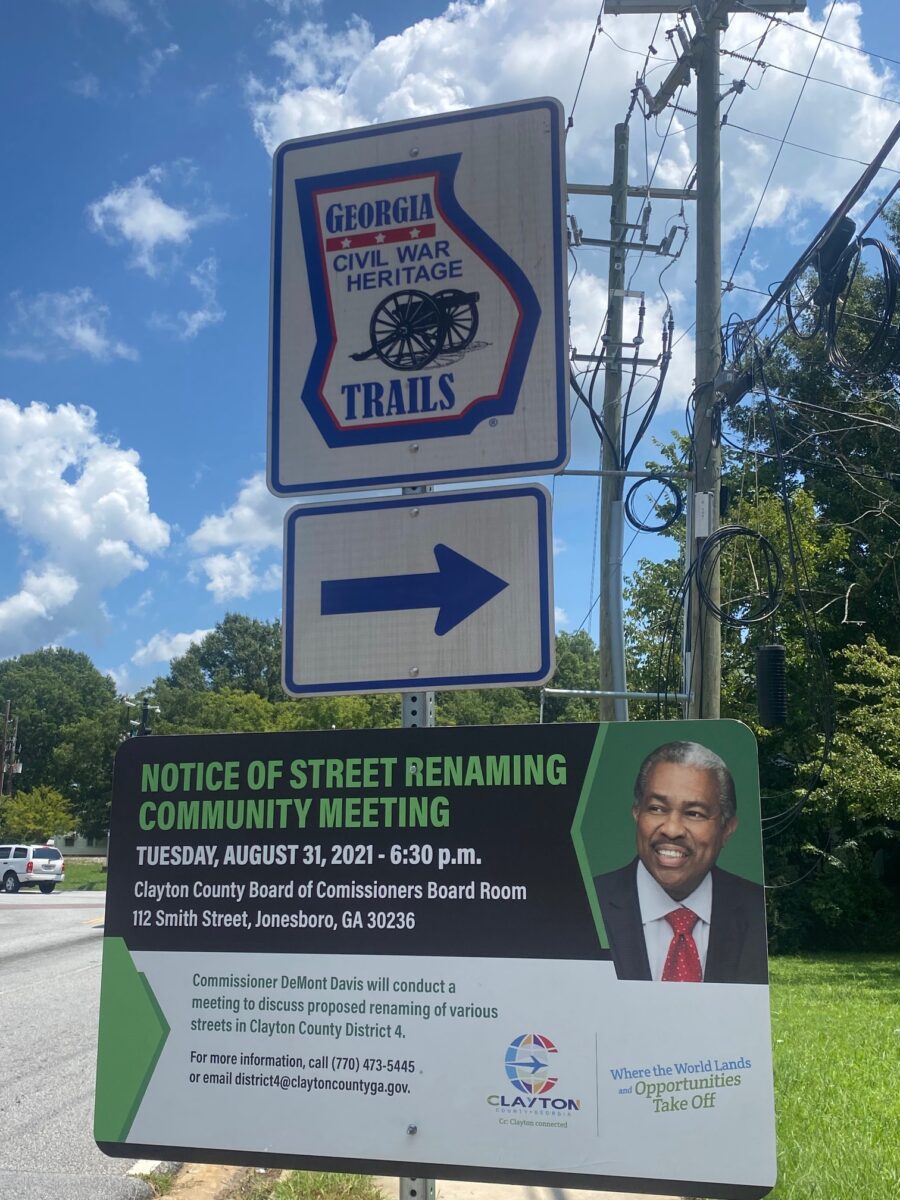 District 4 Commissioner DeMont Davis will host a public meeting on whether to rename streets in the county that are named for Confederate Army figures.

However, he declined to name the young man before the meeting “until his big brother or he says ‘Yeah, I’d like to speak.'”

Davis said Robert E. Lee Parkway is on the southbound side of Tara next to Tara Package Store, at the light before Flint River Road. “If you turn left, that would turn into Smith Street,” he said.

“You know where Sports Cafe is, right off Tara Boulevard 19/41? When you make a right turn there, I believe that’s Robert E. Lee Parkway,” Davis said. “And that’s one of the streets that we’re proposing a name change for, as well as many of the streets down in that neighborhood.”

Robert E. Lee was the commander of the Confederate Army during the Civil War. Other streets up for discussion include Stonewall Jackson, J.E.B. Stuart, Jeff Davis, “a bunch of battle street names, as well,” Davis said. One of those is Utoy Court, named for the Battle of Utoy Creek.

“Many folks don’t even know drive when they drive down Tara Boulevard that you’ve got a street that you make a right on right there is Robert E. Lee Parkway,” he said. “I’ve asked many individuals, and their response was, ‘I never knew that. I just didn’t pay attention.'”

However, he added, he won’t take any action without consulting with the residents of District 4.

“I’m never going to do anything based upon what I think,” Davis said. “I always want to get the community’s input. Whether I agree with them or not, it’s their right. So I want to hear what they have to say on that, and see where we go.”

Davis said some people have expressed opposition to changing the street names.

“I have heard from one individual that has stated that they did not want us to go through all of that,” he said. “Actually, I’ve heard from about three. One of them appears to say, ‘Look, I just don’t want to send everything in to get my street names changed.”

Bob Wood posted a message to Davis on Facebook: “Mr. Davis, I voted for you and campaigned in my neighborhood for you. I understood from you that you were going to fix the corruption in Clayton County. I must have missed all the corruption work you have been doing since you have time to take on this exercise. Or, do you think that this will help fix the corruption?”

However, other residents have tried to rename Tara Boulevard in the past and failed. In 2005, Bob Hartley and several other residents tried and failed to get Tara Boulevard renamed for civil rights icon Rosa Parks. Local politicians were lukewarm on the idea and political rival Gail Buckner said Harley was looking for publicity. Lee Walburn wrote in Atlanta Magazine in 2007, “Even in the metro county of Clayton, residents have resisted attempts to rename Robert E. Lee, Old Dixie Highway, and Tara Boulevard.” Dickey attributed opposition to the name change in part to a 1986 effort to impose a one-cent sales tax for a Tara theme park meant to draw tourist dollars.

“I’m not going to deal and fight for 19/41 Tara Boulevard at this point,” Davis said, “because one, it’s a state road, and let’s do what we can do first instead of trying to build a whole city. Let’s begin to take a bite out of the apple at a time. If there’s other things that can come out of this, so be it.”

Davis added that he was not looking at every street in the county.

He added that most of the streets are in a residential area, so things like changing company stationery likely would not have a large impact.

“Hopefully, the community will come out and voice their opinion on this,” Davis said. “My ears are going to remain open.”

The meeting takes place at 6:30 p.m. on Tuesday, August 31 in the Clayton County Board of Commissioners Board Room, 112 Smith Street, Jonesboro.

The Clayton Crescent appreciates your support to keep this award-winning news service growing! Your gift of any amount, up to $2500, will be matched by a generous donor during August. Please consider making a monthly pledge of $10 or more, or a one-time gift of $100, and become a member! You’ll not only get access to special member-only events–you’ll also help keep the news open to all Clayton County residents! Make your tax-deductible donation online now at donorbox.org/clayton-crescent. Thank you!