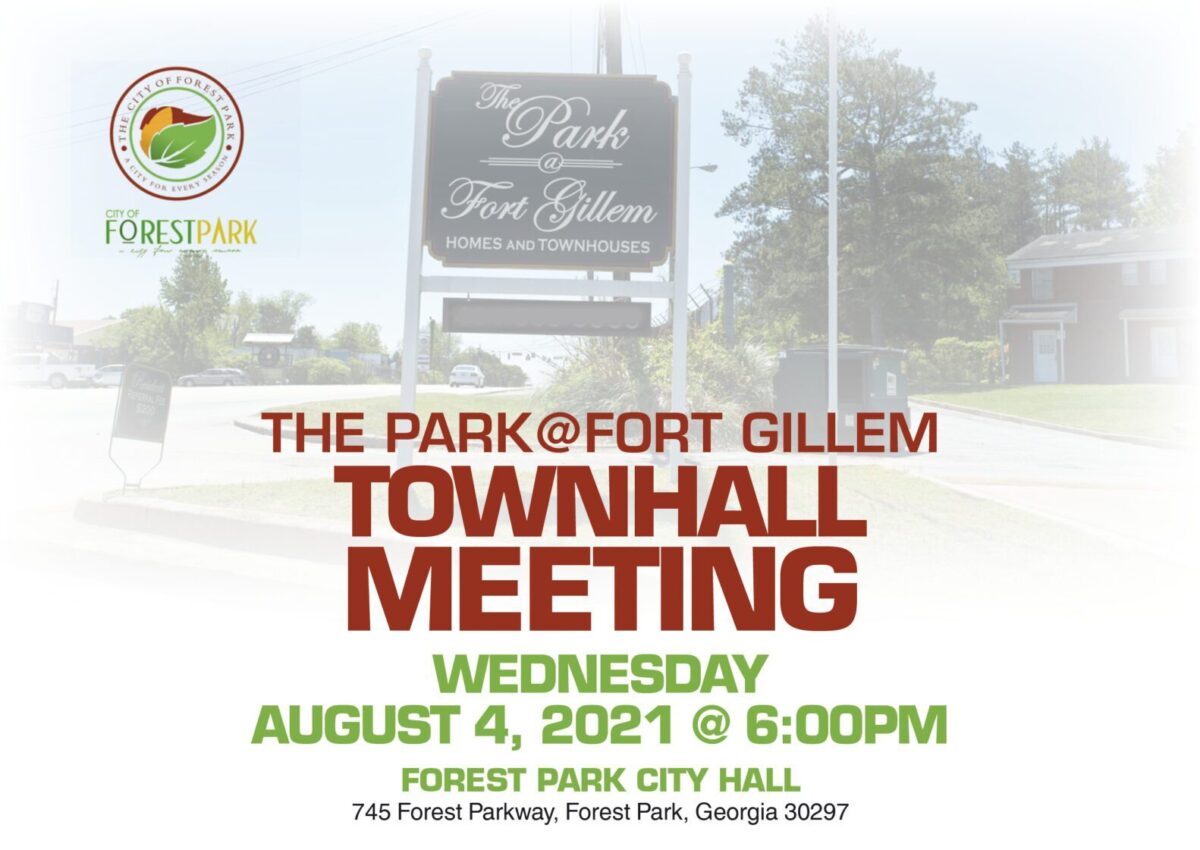 The City of Forest Park will hold its second town hall meeting with residents of the Park at Fort Gillem Apartments, also known as Holland Park, on Wednesday, August 4 at 6 p.m.

The event will take place at Forest Park City Hall, 745 Forest Parkway. It also will be livestreamed via Zoom. The Collaborative Group said it had given out an incorrect Zoom address. The correct one is https://us02web.zoom.us/j/85606189883, according to TCG Planner SaVaughn Irons.

The agenda will include:

The Clayton Crescent has asked The Collaborative Group, which is the city’s consultant who runs the town hall meetings, to provide more specific information about the proposed improvements and the environmental report before tomorrow’s meeting.

Oasis Consulting did the testing on the city’s behalf. The company did not return requests for comment about what kinds of testing had been done. Mayor Angelyne Butler told The Clayton Crescent that testing had been completed as of July 12.

Some residents have expressed concern that there is no playground equipment for children who live at the complex. The adjoining Little League baseball diamond has been closed for years. During Monday’s council meeting, while discussing an offer from Family Literacy of Georgia to donate a Little Free Library to Starr Park, Butler asked whether it would be possible to donate a Little Free Library to the Park at Fort Gillem Apartments.

Butler said on July 9 that, “[b]ased on the assessment of the City’s environmental consultants, no outdoor soil testing is necessary at this time.” Asked for specifics, Butler said she would have to check with Oasis. On July 12, she replied, “Our scope of testing was for lead based paint, mold, and asbestos. We are looking to get an indicator of environmental matters inside the apartments. Yes, the URA owns the ground for Wherry [the former Army housing units]. However, the Army is responsible under BRAC to address hazardous materials if found.”

It’s also unclear whether airborne or soil contamination from the nearby Southeast Burial Site (part of which corresponds roughly to a nearby retention pond across the tree line behind the apartments), or dust that residents say has accumulated on their cars and apartment buildings from construction sites next to the complex, would pose any health risks to people living at the Park at Fort Gillem. Georgia EPD ranks that site as a Priority I–making it Clayton County’s most dangerous toxic waste site.

An attorney who represents victims of water contamination at Camp Lejeune, J. Edward Bell, told The Clayton Crescent that some of the same chemicals dumped at Fort Gillem also were dumped at Camp Lejeune between 1952 and 1987. The four chemicals of greatest concern at Camp Lejeune, according to Bell, are trichloroethylene (TCE), tetrachloroethylene (TCE), vinyl chloride, and benzene–all of which have been found on the former Fort Gillem base, and three of which were found at the Southeast Burial Site.

“I read the list of chemicals that are in the ground, and I’d like to see a little bit more of the testing, because it sounds like they’ve got significant amounts, that they aren’t just minor amounts,” Bell said. “And some people might have future problems. Unfortunately, these problems don’t express themselves for ten years or so.” Those problems, Bell said, include cancer.

Although Bell does not represent any resident from the Park at Fort Gillem, he said it posed “an interesting case. I don’t have any clients, so I can’t really do anything, but if I were to get some, I would look into it.”

The Clayton Crescent asked how people with no money can afford legal representation. Bell said, “We don’t charge people to take these cases. If we end up taking it on as a litigation case, we’ll do it on a contingency.”

However, it would be up to residents to contact his (or another) law firm if they wanted legal representation.

“I can’t call anybody asking for the case,” he explained. “So once I get some clients who call me in something like this, what we normally do is we’d eventually hold a public meeting. And sometimes I’ve had upward of a thousand people show up.”

For example, he said, “We had one in Prattville, Alabama several years ago and they had a bunch of people show up that had to do with problems associated with one of their paper mills. And so that’s how you end up getting a large number of people in the community. And that’s what you need, because everybody has a story, and everybody is affected a little bit differently. And so the wider you can get the number of people, the easier it is for someone to take care of it. And it’s also easier to get the Army Corps [of Engineers] or the government to help fix what’s going on, or at least pay for people to move.”

Bell said his firm has written and filed a bill, the Camp Lejeune Justice Act (H.R. 2192) and with both houses of Congress.

If passed, the bill would “give the Marines and their families the right to file an actual court case” against the United States for exposure to contaminated water at the base between August 1, 1953 and December 1, 1987. It took the Marine Corps three decades to admit it had known about Camp Lejeune’s contaminated water and wells–contamination that the Veterans Administration estimates had affected about 900,000 people over the years.

The bill, which was referred to the House Judiciary Committee, has 40 Democratic and 15 Republican cosponsors, none of whom are from Georgia. A similar bill also sat in committee during last year’s session.

A group called the Veterans Education Project, which advocates for veterans seeking higher education, explains the bill came about after Navy Secretary Richard Spencer denied a number of people’s Veterans Administration claims in January 2019 “to free everybody to take their own course of action.”

However, “an anomaly in the application of North Carolina law in the federal court system” prevents those who were exposed at Camp Lejeune from filing suit.

According to VEP, every other state allows those claims–including Georgia.

As of press time, no one has said with 100 percent certainty that the land on which the Park at Fort Gillem Apartments sit is free of contamination from nearby toxic sites on the base of which it was once a part.

A review of Army Corps of Engineers documentation did not confirm whether the apartment site had ever been tested for chemicals from the adjoining Southeast Burial Site.

The Clayton Crescent has left a request for comment with the U.S. Army Corps of Engineers in Savannah as to whether it knows of any soil, groundwater, surface water, or indoor or outdoor air quality testing ever conducted at the Holland Park property. A spokesman said he would pass along the request.

The city’s town hall agenda does not address whether residents might want or need to relocate as a safety precaution, nor who might pay for that relocation.

However, it does indicate the complex will be spruced up.

To join the Zoom virtual meeting, use this link:

Dial by your location

Please mute your phone or computer microphone when you are not speaking to prevent interference on the line. You can unmute when it’s your turn to speak.

Catch up on all The Clayton Crescent’s coverage on the Fort Gillem contamination issue, which also contains useful resources like maps we made, links to descriptions of different chemicals and heavy metals and what conditions they can cause, and dates of significant events from 1979 to the present: