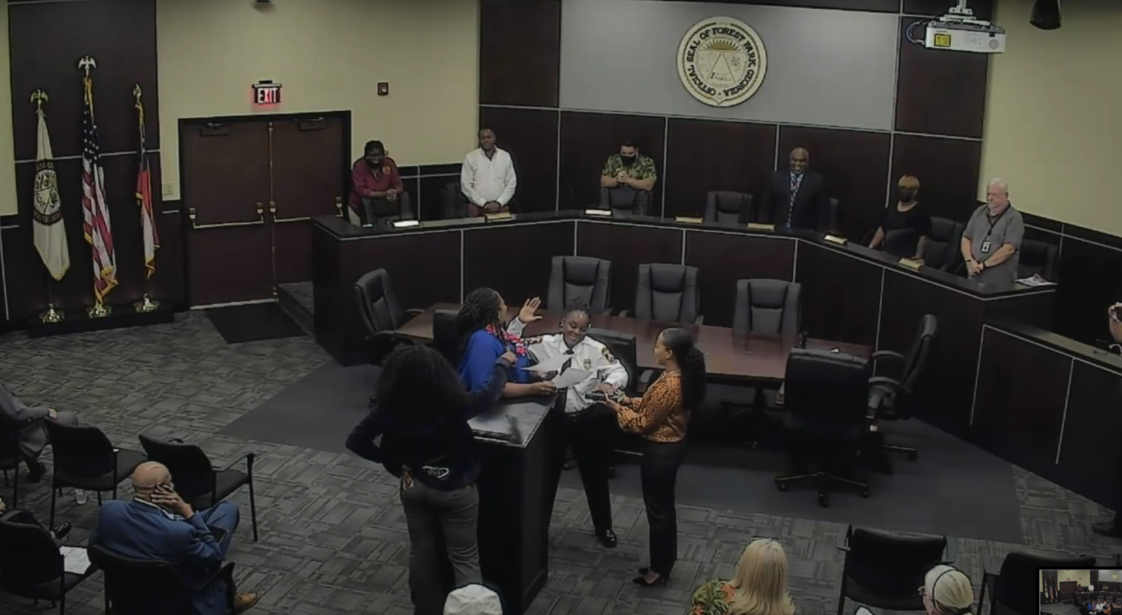 “First, I just want to thank God. I want to thank God,” Clemons said after being sworn in by Mayor Angelyne Butler. “Been a long road. Been in this business for over 26 years and I’ve most certainly had my share of ups and downs. But through it all, I’ve stayed steadfast and uphold my morals and my values as a person, and I’m oging to continue to do that here in Forest Park. I did it in Florida, 26 years in the City of Boynton Beach. Thank God my family’s here, Allene, my partner, my ex-coworkers Greg Jackson and Ben Able, who served with me many years in Boynton Beach–they just got off the plane to come to see this confirmation. Definitely want to thank the council, the city manager, for giving me the opportunity. The men and women in Forest Park, since I’ve been here for eight months, I’ve gotta tell you, I’ve never met anyone that worked so hard, and the support that they’ve given me, they’re here tonight, it’s just unimaginable. And I’m just most grateful, I’m humble, and I will definitely uphold my oath, because that’s just the person that I am. I’m just so grateful. I’m grateful. Thank you.”

While working at the Boynton Parks and Recreation Department, Clemons completed firefighter certification and was hired in 1996 as the city’s first African-American firefighter and worked her way up to deputy chief.

In 2020, a Boynton Beach city mural depicting Clemons and other female firefighters was changed by painting white over Clemons’ face and that of another Black firefighter, retired Chief Glenn Joseph. As the city’s first female African-American firefighter and its then-deputy chief, Clemons said “I was hurt. I was disappointed. And then I was outraged.” She retired on March 1. The fire chief was removed and the public arts director fired in the wake of the incident. On November 19, 2020, a mural that restored Clemons’ image was unveiled.

Mayor Angelyne Butler said of Clemons, “I congratulate her on achieving this milestone in her career and expect nothing but greatness as we continue to move the city forward.”