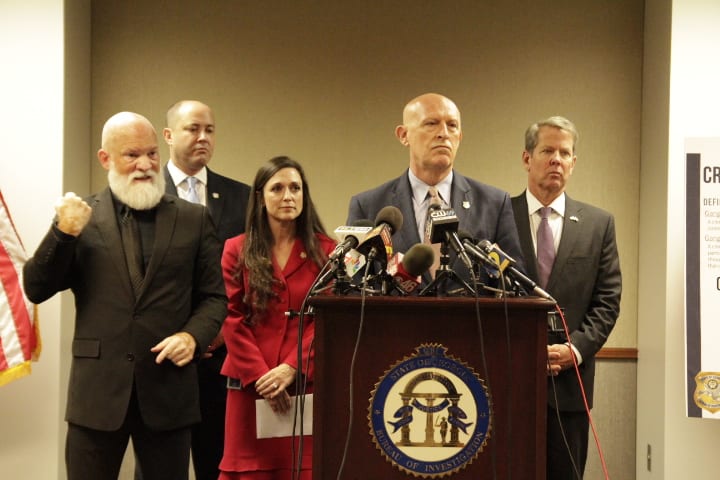 Georgia Gov. Brian Kemp, Georgia Bureau of Investigation Director Vic Reynolds say the state’s Gang Task Force has turned up the heat on gang-related activity statewide–and it’s about to get hotter, with the GBI taking more information into its gang database.

Several factors, including more investigations of gang-related or gang-motivated incidents, more contributions to the new gang database, and RICO prosecutions of gang activity, are making a dent in the problem.

Kemp said, “My administration is committed to supporting the GBI and, as you well know, we are literally making millions of dollars available right now for the crime suppression unit here in the city of Atlanta to try to help push and move the needle on these issues.”

“The acknowledgement that we have a gang crisis in this state, and the subsequent conversation that has taken place around the state as a result of that acknowledgement, I believe, is the most important thing that we’ve done in the last two years,” Reynolds said. “We’re firm believers here that, to solve the problem, we have to first acknowledge the problem. And now that it’s acknowledged, our goal is to go about day-in and day-out solving it.”

“Phase One of that program has been up and running a little bit over a year,” Reynolds said of the gang database. “We’re now in the process of completing Phase Two, and what Phase Two will be, will be our partners inputting gang information from their local jurisdictions into that database. We anticipate sometime in the late fall having our first six to eight beta sites working into Phase Two, and anticipate rolling it out to the entire state sometime in the early months of 2022.”

Reynolds said the GBI “owed a huge thanks to our partners” at Department of Community Services and the Department of Corrections for their assistance in developing the database.

In fiscal year 2020, the GBI used its Gang Task Force and specially-trained agents in all 15 regional offices to conduct 343 gang-related or gang-motivated investigations. In FY 2021, that number jumped to 541 investigation involving almost 70 street gangs or related sets, including groups like the Gangster Disciples, Ghostface Gangsters, Crips, Bloods, Aryan Brotherhood, MS-13, and others.

The GBI has worked with the Georgia Gang Investigators Association to train law enforcement officers across the state about gangs and human trafficking.

In Clayton County, human trafficking is centered around local motels and some homes in area neighborhoods, particularly on and around Old Dixie Road and around Hartsfield-Jackson Atlanta International Airport. The Clayton Crescent asked Kemp whether efforts to fight gang activity and human trafficking involved hotel industry associations.

“Well, listen, our First Lady, as I’ve said many times, has led the country in efforts to end human trafficking,” Kemp said, “but also to support the victims. She has worked with the many hotel associations, other business groups, just the other day, a lot of the folks in the spirit and wholesale spirit industry, beer wholesalers and others are now putting logos on their trucks to raise awareness, they’ve done training with employees, great companies like UPS and Delta and others have done that, as well, and so we’ll work with anybody that’s out there. I mean, the GRACE Commission and the First Lady have developed a 30-minute training program that any Georgian can take. We urged people in state government to do that, I urge people at home to do that, there’s some amazing stories out there of people that literally have just taken 30 minutes to learn what to look for that have had great successes for us, and we’ll continue to do that. I would encourage people to go to the Governor’s Office website or reach out to us about that information. We’d be glad to partner with you.”

Here is the 30-minute training video aimed at the general public:

Reynolds and Kemp stressed that older gang members are recruiting younger ones.

The GBI’s Legal Division, under Usher, is pursuing two RICO cases–one with more than 60 defendants, another with more than 30–in two different judicial circuits. It also is working three civil asset forfeiture cases.

Reynolds said Usher has been appointed to be a judge in Cobb County, starting in January, “so Cobb County’s gain will be our loss, but we’re certainly very proud of her and proud of the work that she’s done, not only over the past two years but over her entire career, standing side by side.”

Usher said her department serves as a “force multiplier” in the GBI’s battle against gang activity.

“Through partnerships with such groups as GGIA, we have traveled the state of Georgia and we have trained thousands of individuals on best practices in gang prosecution, gang investigation, RICO prosecution and investigation, and human trafficking,” Usher said. “With our training, our goals have been twofold: First, to equip law enforcement and prosecutors with the tools that they need to be effective in this crisis, but also to raise awareness within the community of the gangs that are working and acting and committing crime in the communities that they live in.”

In addition, Usher said, GBI’s legal staff has been serving as special prosecutors around the state. “So over the past two years, the stage has been set, and the GBI stands ready to continue to be a force multiplier for the state, to have an impact in this state, and to protect the citizens of the state of Georgia.”

Reynolds said that, according to FBI statistics, street gang members commit 48 to 90 percent of all violent crimes in the country. “Anecdotally, in my conversations with law enforcement officials all over the country, they habitually tell me that, if we go after the gang members in those respective areas, that the majority of violent crime will cease to exist.”

He added, “This is a solvable, fixable crime if we allow law enforcement to do their job.”

Reynolds encouraged people to download the See Something, Send Something app and to inform the GBI of suspected gang and human trafficking activity: “I’d rather you call us so we can make sure it gets to the right agency to look at and it not be anything than just the opposite, where we come back a month or hour later, saying, ‘Gosh, I wish I’d have called somebody and told them.'”

He added, “Look, this is your state. It’s your county. It’s your city. To protect your state, your county, and your city, you’re gonna have to get involved. You’re gonna have to tell law enforcement, ‘This is what we’ve seen, this is what we’re concerned about, these are the activities that are happening here, we believe you need to look into it,’ and I’m convinced they will. You know, we’re an assisting requesting agency. To get us involved, somebody’s gotta ask us. A lot of places, people ask us. Some places, they don’t. So the crime all boils down to a local issue, anyway. I would strongly urge citizens, no matter where they’re at, if something is going on in their community, they tell their law enforcement agency about it, and hopefully they’ll do what they need to do.”