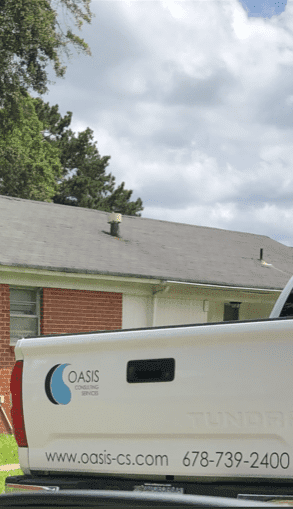 On Wednesday, July 7, sources reported that crews with Oasis Consulting were testing some unoccupied units. Two trucks were on site, allegedly testing for lead and asbestos, as well as testing the air and water. One source said that the crews originally were supposed to have been testing the soil but instead were testing the air inside the apartments.

A sign posted on the management office Wednesday announced that the complex was not taking any new rental applications.

Butler told The Clayton Crescent on Friday, “Testing of the interior portion of the Park at [Fort] Gillem already [has] begun. Based on the assessment of the City’s environmental consultants, no outdoor [soil] testing is necessary at this time.”

Butler said test results should be ready in “approximately three weeks,” adding, “The URA will evaluate a plan of action once the results are received.”

Butler said the estimated cost for the testing is less than $10,000.