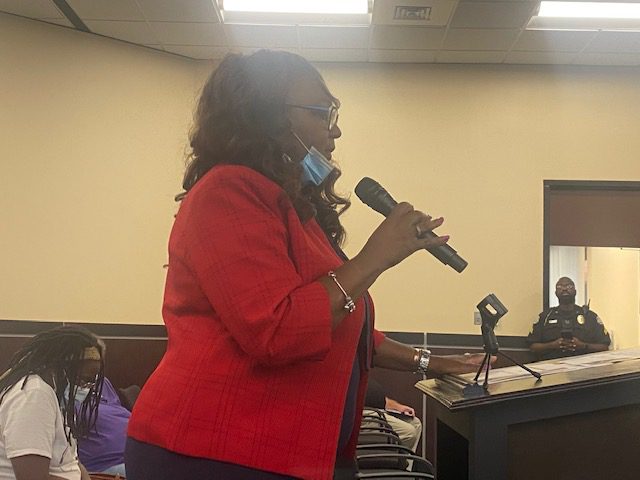 The Forest Park City Council’s livestream of its Tuesday, July 6, 2021 meeting did not include audio of the first 29 minutes. The Clayton Crescent was there and recorded audio of the work session and meeting.

The recording of last night’s meeting started an hour and 32 minutes before the meeting itself went live. The recording of the livestream posted to the city’s YouTube page is silent until 2:01:30.

Earlier in the day, the city had posted a short test video, which appeared to be silent throughout.

Our audio recording does not include 21 minutes while the council was in the next room in executive session; the recording resumes when the council returned to chambers, then voted to appoint Felicia Davis to a vacancy on the Development Authority board.

Marcia Ridley of Intact Consulting Services presented slides explaining what she will do to manage the city’s municipal election this November.

The council discussed whether to extend the $75 per week COVID-19 stipend for city fire, police, EMS, and dispatchers.

The council also debated a proposed ordinance that would prevent individual councilmembers from issuing proclamations without a veto-proof majority (four votes). Councilwoman Latresa Akins-Wells called the move “political.” Councilman Allan Mears said a proclamation is one of the city’s highest honors and should not be given out frequently.

Another contentious proposal from City Manager Dr. Marc-Antonie Cooper was a policy on council decorum. Councilwoman Kimberly James said the members are all adults who don’t need to be told how to behave. Akins-Wells said this move also was politically motivated.

The work session and regular meeting agendas included a discussion of potential candidates to fill a single opening on the Development Authority Board and listed the candidates by name. However, the mayor and council later took that discussion behind closed doors during executive session, rather than discussing the candidates and their qualifications during the open meeting.

After reconvening, the council voted unanimously to appoint Felicia Davis to the Development Authority.

During the regular meeting, several citizens made public comments (you can hear them starting at 1:08 into our recording). JoAnn Thomas said, “I would like to know what happened to the URA Board from the beginning.” She also asked “How are we operating with the Army on the contract with Fort Gillem, concerning Fort Gillem?” and “Why didn’t the URA board research when it’s been going on since 2010 and now it’s 2021?” She added, “I have contacted the State of Georgia concerning the URA board for Forest Park. I’m waiting on them to get back with me and they told me they would, this week. Because if an agenda is required by law, and it was not done, per meetings that was held in the past, why? And where can I find that it was done, by law? Because also that was four members back in 2020, I believe, that was removed from that board, and power was given to the DDA. It’s all online. And the Urban Redevelopment Authority meeting, in 6/21/21, please explain that to me.”

“And also, the meeting that was held between Forest Park–the Park at Fort Gillem, and supposed to have been legal teams. I would like to know, ma’am, why you did not excuse yourself, since we was told this was supposed to be between the legal teams and the residents. Thank you, ma’am.”

Felicia Davis said, “To the chair, let me first say to Ms. Thomas’ comment, and I did serve on the URA board, I do have some history, and yes, there were challenges with residents, but there is a record, and we did keep one, and we did function according to our rules and procedures. And the disbanding also happened, to the extent possible–that’s all I’ll say on that. But there were issues. I wanted to say to our city manager, but through the chair, that I was pleased to have my councilwoman nominate me. Another councilwoman called me, saying, ‘you ought to have a resumé,’ I’m like, I’m not looking for a job, but I do have a bio, but I was going to withdraw it because Councilman Gutierrez, I was so impressed with the others on the list and I too love new blood. So then, having been called by a few people, I thought, ‘Let me stand down. Leave my name on the list and let y’all go in back and figure that out.’ But I’m happy any way that it might go, so that’s my comment.

Davis continued, “Then I wanted to address proclamations, decorum, et cetera, et cetera, et cetera. So there’s a part of leadership that can’t be legislated. And that’s even though you must have good policy, okay? But if you have the best policy, you really should be getting along as a body. That’s a two-way street, and I address that through the chair but to all of the members. And so, pettiness is something that we each individually have to check ourselves to set aside, and then get to the point at issue. I would also say that some people speak how they speak, okay? So in some situations, my vernacular changes, so, ’cause, ‘Why you wanna do me that,’ ‘I don’t wanna do nuttin’,’ I ain’t trying to have it,’ ‘so you ‘right?’ We can go there. There’s a time and a way that different people will speak, but that we search for the meaning and extract that out, we get to a better place. And if we can set aside ego in that moment. Okay? Because who matters most in this room is sitting over here.” Davis gestured to the audience.

“So for those serving, I take that piece of leadership profoundly.”

Cliff Pellegrine said, “As I read through the agenda and packet for tonight’s meeting, it occurred to me that the city usually establishes new ordinances for one reason, and that is usually to attack a current problem that some feel have been overlooked. Examples recently, the city of Atlanta adopted ordinances on street racing and water sales. Why? Because those issues presented a problem for some people. The purpose of these ordinances is to control certain behaviors that have been problematic for the some. Are these new ordinances working? I’m not sure. At this point, kids are still selling water on the street and they’re still street racing and it’s happening. At the last meeting, we heard quite a discussion about personal conduct of governing body members. Our esteemed city attorney shared his thoughts about this issue, and made reference to the importance of the governing body working together for the good of this community. I believe he made reference to a guidance manual that is issued to each member of this body that covers all things that governing body members everywhere should and should not do. You as adults have access to those guidelines and should read and reflect upon those from time to time. The point I’m trying to make here is that this governing body has the tools at its disposal to conduct itself in a productive and appropriate manner. Because some of us have different styles should not matter. We should come together as a group to do what is best for Forest Park. As I read the proposed ordinance, I could pretty much identify the problems that it is trying to legislate. I strongly urge this governing body to review this proposed ordinance as a reminder of professional conduct, but reject it because it is unnecessary.

“I also want to congratulate Councilman Gutierrez at his recent efforts at getting long-overdue recognition for the local Hispanic and LGBTQ communities. I am curious as to why we now have this new proposed proclamation ordinance. As I read the draft of it, I understand that it could possibly exclude groups who may have been recognized in the past. The veto portion of the procedure also concerns me in that certain items could be excluded before going to a vote of the general governing body. And one last thing, Tyree Nuñez for Development Board.”

Akins-Wells presented a cellphone video she took of refuse on the ground at the Waste Management transfer station at Cash Memorial Boulevard and Brookdale:

The rest of the governing body appeared stunned by what they saw:

Akins-Wells vowed to get Waste Management out of Ward 4.

A representative of the Forest Park PTSA made a presentation to Councilwoman Kimberly James for her active support of the group:

[Ed. note: More to come–please listen to the audio in the meantime]