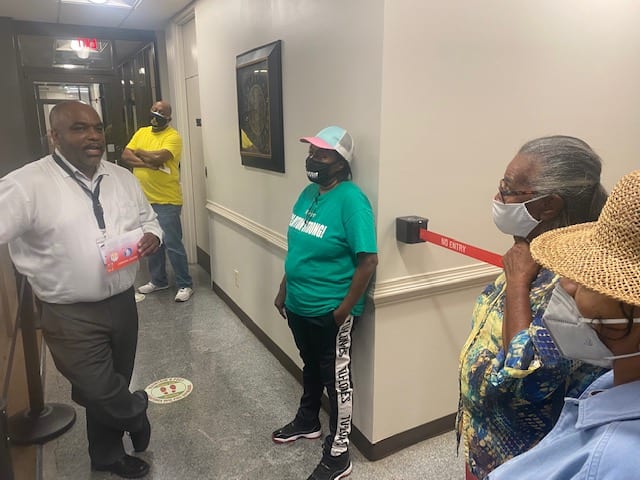 On Wednesday, June 30 at 6 p.m., the City of Forest Park will host what it says will be a “town hall meeting” for residents of former Army housing that is run by a private landlord, on land that belongs to the U.S. Army, under the jurisdiction of the city. The city will have legal representation, as will the leasing company. However, it remains to be seen whether the residents themselves will have a legal advocate looking out for their distinct interests.

On Monday, a meeting was reportedly to have taken place at the Housing Authority of Clayton County’s offices in Forest Park. The Clayton Crescent called to confirm, but the person who answered the phone appeared not to know of such a meeting and suggested calling Community Development. (We left a message that was not returned by that office.) When residents and The Clayton Crescent showed up, no one said any meeting was taking place inside.

Three residents of the complex, frustrated by the lack of answers since learning in March of the longtime toxic waste issues on and near the decommissioned base, took their concerns directly to City Hall. They said no one had told them about the June 30 meeting, which City Manager Dr. Marc-Antoine Cooper had verbally announced in his city manager’s report at the last city council meeting. Residents said they had learned about the “town hall” from The Clayton Crescent. No official public notice was given, Cooper said, because the town hall would not be a meeting of the governing body.

Taking it to City Hall

“Is anybody here?” asked JoAnn Thomas. “I see somebody with blonde hair.” Thomas sat in her fire-engine red walker. She said she wasn’t feeling good but that she came out anyway.

The women grumbled that the city should have sent out flyers to the residents, so that people could make plans to get off work or school in a timely fashion so that they could attend.

“I don’t think it’s fair they call these meetings and they don’t notify everybody theyself,” said Josephine Martin. “Why we gotta run around and tell everybody?”

“They want the money but what are you doing for the city? This is my thing,” Thomas said. “It’s like the two-stop red-light town. And you got people who live here with money, too.”

Thomas said that, even if the city would pay to move her, she needs three bedrooms because of all the medical equipment she requires.

“Why aren’t somebody from the city out there looking out for us?”

“Where’s the city manager?” Thomas asked. “We are like little bitty babies. We need to be nurtured, along this journey. The city does not need to leave us by ourselves because we are like underage children being left alone because we know nothing to do, or what to do or how to do, because nobody is telling us anything. It’s just like a child about the parent. They’re not being taught and we’re not being told anything. And we’re still living in the condition of the apartments. Nothing has been done about that.”

She said the landlord “said he’s not going to accept any money from the federal government program.”

“Why aren’t somebody from the city out there, looking out for us?” Thomas asked.

But the city’s interests might not be the same as the residents’ interests, legally speaking.

Decades of problems come to light

The city, through its redevelopment boards, could take over the land in 2025. That’s when the Army’s lease with the property management company runs out. The Army owns the land on which the apartments sit. The management company is supposed to maintain the buildings and collect rent. None of those entities have said anything about who might be liable for any issues, including any possible toxic exposure involving Fort Gillem.

The city bought the base but doesn’t own all of it–yet. Those areas deemed too toxic to sell must first be remediated. That doesn’t mean the dump sites will be “clean” when they are turned over to the city. It just means that the contamination levels of various heavy metals, carcinogens, and other contaminants at the various sites meet regulatory standards. What’s acceptable on paper, however, might not be safe in the real world.

And if the residents were exposed to toxic contamination over the years without anyone telling them about possible risks before they signed their leases, it’s possible that the other parties could be looking at a class-action suit–if an attorney decides to represent the residents.

The complex has been troubled since the 1950s, when the U.S. Army leased the roughly 31.36-acre site to Conley Housing Corporation, formed by Edwin L. Jones of Atlanta (in 1951, Charles B. Jones was also listed as an officer of the company). The company was to build about 125 units, which it would run for 75 years–until 2025–under Title VIII of the National Housing Act.

After World War Two, veterans and their young families were unable to find affordable housing and built shacks near bases around the United States. To address the problem, the federal government passed the Wherry Act, which allowed privatized housing on base. These “Wherry Housing” apartments were often put up in a hurry, sometimes with contractors cutting costs and pocketing the difference. Park at Fort Gillem, also referred to by the city as Holland Park, is Wherry housing.

At the Gillem apartments, the contract originally provided for:

Over the years, the complex changed hands, mostly between investors whose paperwork used out-of-state and foreign addresses:

The corporate paper trail continues–we’ll break it down in a separate story.

To date, the city has yet to clarify whether it has an agreement with the current property management company, Reliant Development Group, L.L.C., and the company has not returned The Clayton Crescent’s requests for comment. (An e-mail sent June 29 was returned as blocked.) However, the Clayton County Water Authority, which provides the complex’s drinking water, says it does not provide the apartment’s septic service. Residents have complained about dirty water backing up through their sink and tub drains and dishwashers.

“No one from the city comes out there to see,” Thomas said. “And we’re just lost….I can vote but no one cares about me. None of the elected officials who you vote for cares about you. Because if they did, we would see and we would know what’s going on. As tenants of Park at Fort Gillem.”

Originally, the city had planned to build playgrounds and senior housing on parts of the base as part of its redevelopment plan. Those aspirations quietly changed.

The city knew about the contamination, which has been a matter of public record since at least the 1970s. At the very least, it knew about the last two public notices for public comment on cleanup plans that residents did not see.

In order to tell their sides of the story, we attempted to reach all parties. Not only has the leasing company not responded to The Clayton Crescent’s requests for comment—neither has Thomas Lineer, the civilian contact at Gillem Enclave, nor has the U.S. Army Corps of Engineers in Savannah, which is responsible for cleaning up the base.

Today, massive warehouses are springing up next to the apartment complex. Existing warehouses on the old base are pumping much-needed money into city coffers.

Martin pointed out that the city had pushed voters to approve tax breaks for new warehouses and had promised that hundreds of jobs would result.

“[Instead, they] Make it where 3,000 robots stand being within that freezer in there. Yeah, they hiring in that one place where [people] have to work in the deep freezer for the whole shift.” she said.

The complex’s residents aren’t seeing a dime of the money that is flowing into and out of Gillem. What they are getting is a lot of unannounced demolition blasts, which, they said, terrorize one neighbor, a veteran with Alzheimer’s, who is so upset he cannot sleep at night.

“Do they think that just because the rent is low that we are poor, uneducated?”

“I’m just so disgusted with the City of Forest Park and the management,” Martin said. “And I’m beginning to wonder, I don’t–is it because the majority of us over there is Black? Is that it? I say no, because the majority of the people here [City Hall] is Black. But that really doesn’t mean anything either, does it? You’re Black, you’ve got a nice high position but you’re not helping the people over here. Do you think, do they think just because the rent is low, that we are poor, uneducated, is that what they think? They can just do anything to us? Because they’re wrong. Because I have college education.”

“And if they’re looking at that complex, thinking, ‘Oh, we’ve got low-income, uneducated Black people, we can do anything to them,’ they’re wrong,” Martin said. “Because they’ve got somebody right here that’s gonna fight.”

“And they need to give us some answers,” Martin said. “It’s been quite a while. No answers. None. They never came back. They came in my house and tested the water.”

“We just need some answers”

After the women waited about 10 minutes for someone in the front office to acknowledge their presence, community organizer Lawanda Folami arrived and flagged down a city employee.

“They scared. Let me show my face,” Folami joked.

“Hey, how are you? We were here to see the mayor, but I don’t think she’s in.,” Folami explained to the clerk behind the glass. “So therefore, let ius make an appointment. Could you find a clerk to make her appointments?”

“Is the city manager in?” Thomas asked again.

Folami asked City Clerk Diane White to find out when the mayor would be available.

“Do we look like somebody gonna start a riot out here?” Thomas asked. “We just need some answers.”

The women talked about a light blue SUV that had passed by and whose driver had seemed to take photos of them as they waited outside the Housing Authority an hour before.

A few minutes later, Cooper came out to the front hallway to meet with the residents.
“Actually, it’s the city attorney and the attorneys for Hollander Park,” Cooper said, “and we are e-mailing the information to the management company and they were going to walk around to each apartment and give them the notification for the Wednesday meeting.” He added that he was trying to coordinate shuttle service for residents.

The women asked for a copy of the flyer to pass around.

“I don’t have the flyer ready at this point, but I’m trying to have it ready by the end of the day so that the management company can come and hand-deliver it to each apartment,” Cooper said.

Listen to the full 20-minute conversation between Cooper, Folami, and the residents at City Hall Monday:

“The mayor wants us to get the information out as quickly as possible.”

Cooper said Wednesday’s meeting was the first of many to come.

As of press time, Cooper told The Clayton Crescent that he has been out to see the apartment complex, but that had not gone inside any of the units himself.

The women said they’d heard that Sen. Raphael Warnock was at Annie Laurie’s Kitchen in Riverdale and caravanned over to try and get his help. When they arrived, only a long line of drive-thru customers was there. They asked inside whether Warnock would be there.
“I don’t know,” one employee said.

The next day, Warnock met with many of Clayton County’s most powerful politicians. The meeting was closed to the press. The only record of what transpired came from social media posts by participants. Thomas was too sick to go and hold up the sign she’d enthused about the day before. Martin was busy trying to get flyers about Wednesday’s meeting to the other residents. Warnock’s office could not confirm on Tuesday whether he might attend.