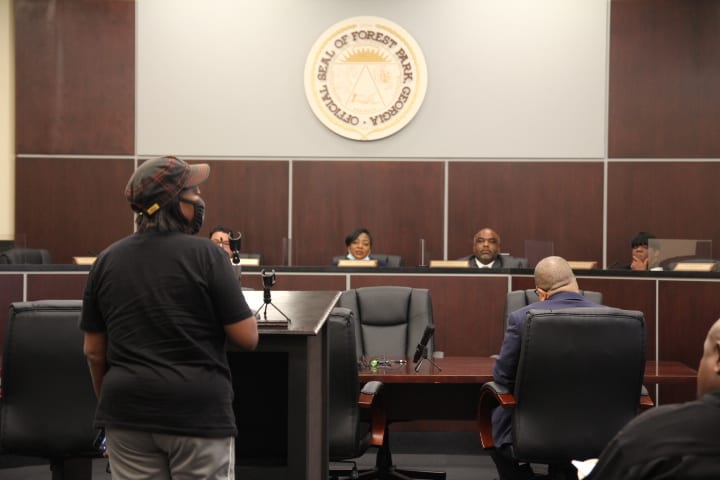 The Forest Park City Council will hold what is likely its final meeting on the proposed fiscal year 2022 budget, following requests from attendees to give the public more time to go over the document.

The city had scheduled a previous public hearing, which no members of the public attended in person, while quietly dropping the city livestream.

Each speaker will have three minutes to address the council tonight on the proposed $34,714,281 budget. Here are the fund summaries, which are broad totals for money going in and out:

Until the council votes to approve the budget, none of that money is available to spend; the city cannot function without a budget, so getting it passed before July 1 is important.

The budget breaks down two major categories: revenues (money coming in) citywide and expenditures (money going out) by department.

Each department has to show what it spent last fiscal year and how much it’s asking for in the new fiscal year. The budget doesn’t show every single purchase order or receipt a department spent. Instead, it shows the total amount spent for different kinds of expenses (such as office supplies or public relations). Under each departmental category, you’ll see a long string of numbers. That string shows the exact budget code for that line item. The line item is the name of how the department spent that particular pot of money.

In this example, from the Department of Legislative Offices (the mayor and city council), you can see:

The budget contains more information besides these line items. Each department provides a “Line-Item Explanation Schedule” following its numbers, which gives a basic explanation of each line item. That’s important for understanding why a large change like the 1,800% increase for “Communications” is proposed:

You also will find organizational charts, which show who is in charge of each department (at the top) and the employees or proposed positions that the city wants to add to the budget:

The Executive Offices (the mayor, city council, and city manager) want to add two new positions: a deputy city manager to take on some of the city manager’s many tasks, and a public information officer to coordinate information and public relations about the city.

These two professional positions would cost $253,000 under the proposed FY2022 budget:

Sample job descriptions for each proposed new position also appear in the budget:

Going through the budget yields more information about the state of the city’s staffing. For example, the city has no finance director at this time (it does have a deputy finance director, Darquita Williams, acting as the department head). The Finance Department is asking to add a staff accountant position, and does not have anyone in its current business license position.

The city also plans to spend $12,000 on new decals for city vehicles.

The department wants the salary increase “based on the hiring of (1) Accreditation/Quality Assurance Coordinatior,” who Chief Nathaniel Clark has said would be responsible for making sure the department could keep up with CALEA accreditation requirements, “and (1) Grant Administrator.” The request for overtime pay “is based on overtime pay for officers reference [sic] special events.” The air card/maintenance increase is “due to the implementation of body cameras, cell phones, and additional air cards.” The prisoner expense line item increase is due to “the purchase of an AFIS [Automated Fingerprint Identification System] interface.”

When is a cut a cut?

It’s important to note that sometimes a cut is not always a cut. It may just indicate a change in how the funds for a particular line item are being accounted for.

Recreation and Leisure Services has four staff vacancies: a senior leader, two recreation leaders, and a maintenance worker. Overall, it has cut the FY2022 budget by $8,257.

However, the line-item explanation shows that youth basketball, youth baseball, and special events are line-item increases.

We asked Recreation Director Tarik Maxwell to clarify whether any of those line-item cuts for individual sports actually mean program cuts or whether they are all being lumped together under the “athletic program” line item for accounting purposes.

Not to worry, he says: “All our athletic programs are being consolidated under the athletic program line item.” That’s why you have to look at where the money goes within each department, not just individual line items in isolation.

The explanation for “schools, seminars, training” notes, “This line item reduced to meet budget requirements.” The expenses cover “mileage, meals, and lodging for training and travel” and include:

Director Bobby Jinks wrote, “Increased due to added classes for employees in HVAC, CDL, E&S. I plan on sending our department employees to any and all training available.”

The department offers these explanations for the following line-item increases:

Money to burn, or not

The Fire Department also included a job description for a new Health Safety Officer position, another for a medical services officer, and a third for a lieutenant to serve as training officer in the Fire Training Division. This comes after longtime Training Captain Jon Baker’s promotion to Battalion Chief. Captain Keith King was promoted to training officer and the department wants to add a second training officer.

Where is your emergency?

Emergency Management Services offered a budget totalling $3,500, unchanged from FY2021, and consisting of:

You can read a copy of the budget online at tiny.cc/FP22Budget.