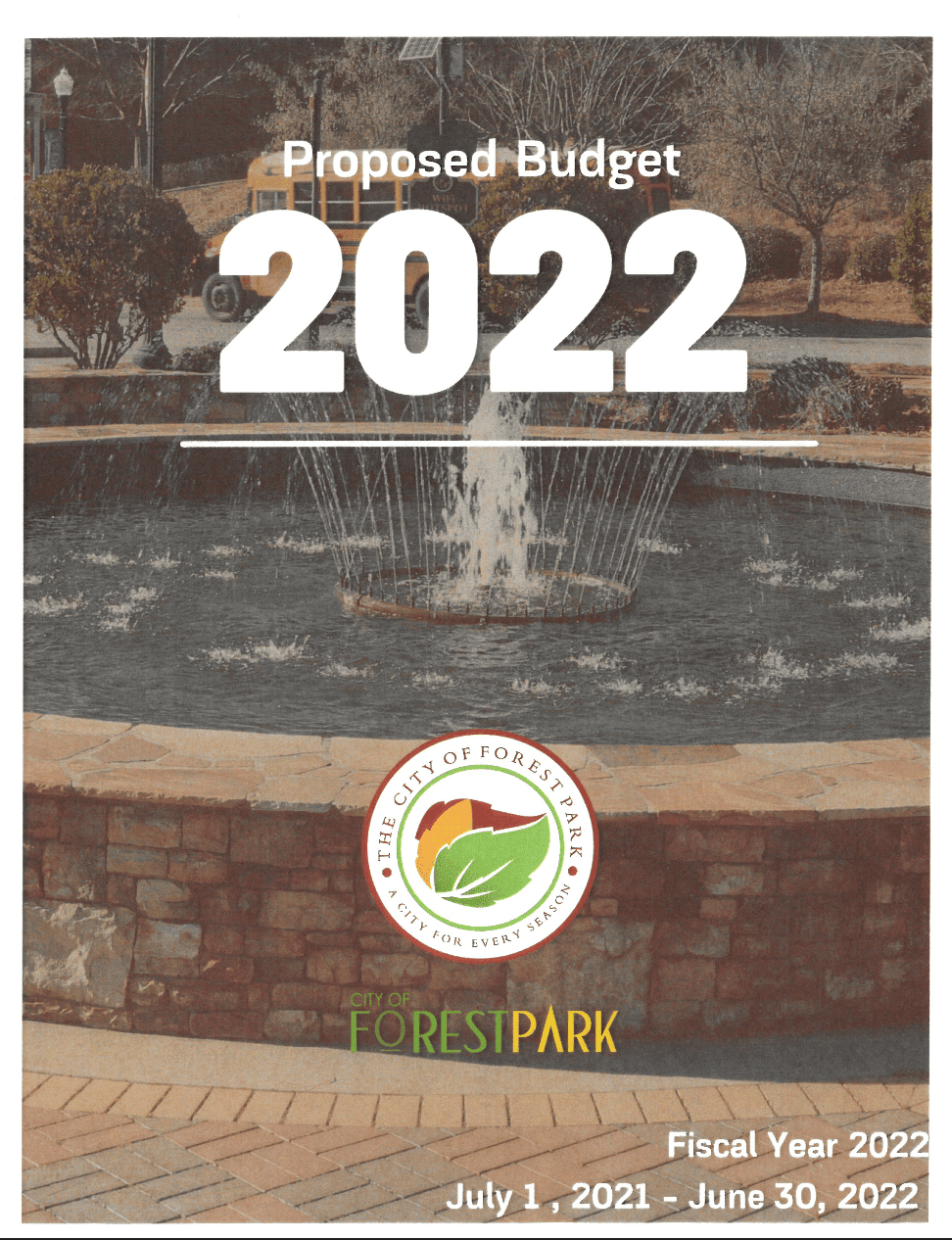 One year ago, the inability of the public to see and hear Forest Park’s elected and appointed officials as they discussed the budget during the COVID-19 emergency prompted The Clayton Crescent to try and cover the meetings in person.

Tonight [June 16], the City of Forest Park did not run its livestream during the public hearing for the proposed FY2022 budget.

And leading up to the meeting, the city quietly removed its Zoom link information without pointing it out to the public, which had used the livestream in recent months, even after the city reopened its doors for in-person attendance at meetings.

The city voted in December 2020, after months of negotiations with the University of Georgia Law First Amendment Clinic on behalf of The Clayton Crescent, to upgrade the city’s livestreaming capabilities. At the time, the city’s appointed boards asked to use the system in chambers and agreed to split the cost.

The published agenda did not include any special notice (as it has for closures to the public and COVID-19 requirements) that the city would not supply its citizens with remote access to perhaps the most important meeting each year–the one that lays out how the city plans to spend its citizens’ tax dollars.

When The Clayton Crescent asked City Manager Dr. Marc-Antoine Cooper, “No livestream link on the budget hearing?” at 5:05 p.m., Cooper responded at 5:11 p.m., “No live stream this evening.” He did not say why.

As city manager, Cooper “prepares the annual budget, submits it to Council for approval, and implements it once it is approved.”

Asked why the public had not been notified of this specific change, which is a departure from the city’s practice since The Clayton Crescent’s legal team negotiated the installation of dedicated livestream equipment, Cooper replied, “Robin the meeting was advertised in the news paper and via normal [sic] channels.”

When the Clayton Crescent asked at 5:21 p.m., “When did city decide to drop live-streaming,” Cooper appeared to start, then stop, a reply by text three times, but never responded.

That’s significant because not offering a livestream at this juncture gives the public less access, not more, to meetings of its governing body–despite the city’s brand-new $36,810 livestream system and despite the fact that the public can now attend meetings in person again.

Online searches of Georgia Press Association public notices between April 17 and June 16, 2021 turned up no notice of the public hearing via the search phrase “Forest Park.” A search for the word “budget” turned up the following legal notices published on these dates in the Clayton News, which is the county’s legal organ:

However, no notice of the City of Forest Park’s upcoming budget hearings for FY2022 appear on the statewide public notice website. (The actual legal document is the one in the print edition.)

To make sure, we re-ran the search for the word “budget” for the past 52 weeks. That returned additional hits for:

A search of “Forest Park” for the past 52 weeks returned 74 pages of results (about 740 ads). These included numerous tax sales, debt collections, new business names, assorted court notices, name changes, abandoned storage unit sales, property seized during drug arrests, and abandoned vehicles to be auctioned off, as well as the following notices of official city meetings, bid notices, and requests for proposals. They also included major projects the city undertook while the public was locked out of City Council meetings without a reliable livestream during the city’s declared COVID-19 emergency.

No mention of the City of Forest Park’s public hearings on either the FY 2022 or the FY 2021 budgets turned up in The Clayton Crescent’s search of the past year of legal notices published in the Clayton News.

Some ads ran more than one time to meet legal requirements:

No press coverage, no problem

Although the published agenda did not contain a Zoom link and dial-in information for this meeting, as it has for several months, it did contain a shortened link to the city’s YouTube page. However, no livestream was running on the YouTube page, either, when the meeting started.

Cooper did not mention any technical difficulties with the feed.

The meeting apparently ended sometime before 5:40 p.m., when The Clayton Crescent drove past City Hall to another meeting across the street at the Housing Authority of Clayton County that had been called for 6 p.m. Only a few cars were in the City Hall parking lot. Several minutes later, both Mayor Angelyne Butler and Ward 1 Councilwoman Kimberly James showed up at the HACC meeting.

After 10 p.m., a check of the link to the budget that had not been made clickable from the agenda, but which had worked when cut and pasted earlier, returned a 404 error–meaning that the PDF copy of the proposed budget had been taken down:

A search of the full city website found the proposed FY 2022 budget had been added to the bottom of the Finance Department’s Financial Reports page. Chronologically, it should have appeared as the first, not the last, item in the list:

In the days leading up to the budget hearing, The Clayton Crescent and Cooper had exchanged several e-mails about where the public could read the budget online and about that link not being active on the published agenda. On June 14, The Clayton Crescent asked for a link to a copy of the proposed budget. Cooper wrote, “The link for the budget will be up by COB [close of business] today.  We were having some issues with formatting, but those are being worked out now.”

During those exchanges, Cooper never mentioned that the event would not be livestreamed, nor did he mention how or when that decision had been made leading up to the annual budget hearing.

The city later posted a link to the budget prominently on its homepage slider:

Under the Georgia Open Records Act, nothing specifies that a government body must livestream its proceedings. By the same token, nothing in the law specifies that it must roll back expanded access that it has established. Legal experts have stated that, when in doubt, the tendency in Georgia’s sunshine laws should be towards greater public access, not less.

Since the pandemic, greater government and citizen reliance on livestreamed meetings has become the norm. In a March 2020 interview with the Atlanta Journal-Constitution, attorney Sarah Brewerton-Palmer, who serves on the board of the Georgia First Amendment Foundation, “said most cities have adjusted well to holding meetings virtually or using a hybrid approach, combining virtual and in-person methods. ‘I think it really does increase public access,’ she said, ‘and it seems to us that hybrid model is really the best balance of all the different interests.'”

Other governing bodies around Clayton County, such as the Board of Commissioners and the City of Jonesboro, have been providing livestreams for years before Forest Park began doing so:

The City of Morrow does not provide a livestream but posts video of its city council work sessions and meetings on YouTube after the fact. Morrow began recording its meetings in March 2020 due to COVID-19 but never closed its chambers to the public as Forest Park did.

Forest Park started a YouTube channel in September 2020 and has both carried livestreams and posted videos of meetings after the fact there. Before the city installed the dedicated livestream system, it had carried some meetings via Facebook Live.

The city also has hosted livestreams of Councilwoman Kimberly James’ Ward 1 monthly meetings via Zoom, such as one scheduled for Thursday, June 17:

James also used the city’s Zoom account to host a “Unity in the Community” event, which was a prayer service by several ministers of the Christian faith. Clerics of other faith traditions in Forest Park (Hindu, Buddhist, Muslim, etc.) were not invited to take part in the event, which also posed questions of separation of church and state. If the city offered state-sanctioned religious instruction, possibly at taxpayer expense if city accounts or communications technology were used to conduct the meeting, it could have violated the civil rights of citizens who do not subscribe to the particular religious beliefs expressed at the city-sponsored online event.

Transparency tends to turn opaque as elections draw near.

The day before Forest Park’s budget hearing, a joint committee of the Georgia House and Senate came under fire for its handling of public comment on the redistricting and reapportionment process. While about 250 people accessed the hearing livestream, only 60 people were allowed to sign up to speak for two minutes each. Less than one-third of those who signed up actually testified. It’s not yet clear whether the others had signed up to block others from speaking, were unable to use the Zoom meeting interface, or just didn’t show up. Others said they had been turned away from testifying because all the slots had been filled. As a result, the committee says it may only do one more livestreamed public hearing, requiring citizens to travel to various cities around Georgia to testify in person, even though the committee has yet to announce the exact locations for each of those hearings.

And in Cobb County, the school board scheduled a do-over, citing “technical difficulties” with the livestream.

Forest Park has the largest population of any city in Clayton County. It also controls some of the county’s biggest economic drivers through the city’s URA and Gillem Logistics Center.

How many people turned up in person for Wednesday’s public hearing on the budget for Forest Park–a city of robust civic participation before City Halls’ COVID-19 lockdown?

As for how many tried to attend via the city’s livestream, the public may never know.

You can read the full draft FY 2022 budget on The Clayton Crescent’s Docs page, also known as the Reading Room. We curate various public records of high interest for the record so members of the public can find them more easily. If you have the results of an Open Records or FOIA request that you would like to share, please contact us and we will consider adding it to the Docs page.

If you want to learn more about open meetings and open records law in Georgia, which protect your right to know what your government and elected officials are doing, see The Red Book, published by the Georgia First Amendment Foundation.