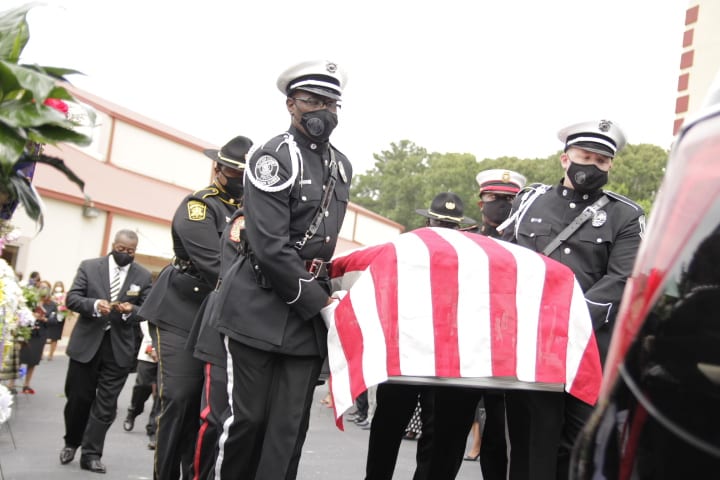 story and photos by Robin Kemp

Hundreds packed the gymnasium and floral arrangements extended past both sides of the stage at Travelers Rest Missionary Baptist Church for the late Clayton County Board of Commissioners Vice-Chair Sonna Singleton Gregory in Morrow June 5. Gregory, who died of ovarian cancer, had planned her own service, which was livestreamed on the county’s website and which you can watch online. Gregory’s larger-than-life personality was evident even in death: a red beret cocked to the left on her head, a red cloth bearing the letters of her sorority, Delta Sigma Theta, tucked in her left hand, and the American flag draped over her casket. Representatives of Watkins Funeral Home crowned her with a symbolic tiara before closing the lid. An honor guard comprised of officers from the Clayton County Police Department, the Clayton County Sheriff’s Office, and Clayton County Fire and Emergency Services stood at attention outside the church doors and a long line of people, mostly women, carried out the floral arrangements, lining both sides of the pathway as Gregory’s casket was borne to the hearse.

Gregory’s funeral procession took her through District One’s major streets, stopping traffic for an extended time on Jonesboro Road, Mount Zion Boulevard, and Tara Boulevard as she was carried, through a double fire ladder arch flying a large American flag, to her final resting place at Sherwood Memorial Cemetery. A ceremonial bugler from CCSO played “Taps.” Two American flags were folded and presented: one to her husband, CCPD Aviation Manager and Pilot Willie Gregory, Jr.; the other to her daughter, Eagle’s Landing Middle School orchestra teacher and ELMS “Rookie of the Year” Jordyn Speakman. Fellow commissioners, family, friends, and ordinary citizens then passed by the casket, each laying a red rose as a final tribute to the dynamo who gave so much to the people of Clayton County–senior centers, school events, new businesses, youth leadership, cancer education–in such a short time.

If you can help us identify people in the photos for the record, please let us know either by direct e-mail or social media. Masks can make it harder to recognize people, and we don’t know everyone, but we want to be sure to get the record correct.

The Clayton Crescent extends its sympathies to the family, friends, and colleagues of Sonna Singleton Gregory.