What’s next for Sheriff Hill? 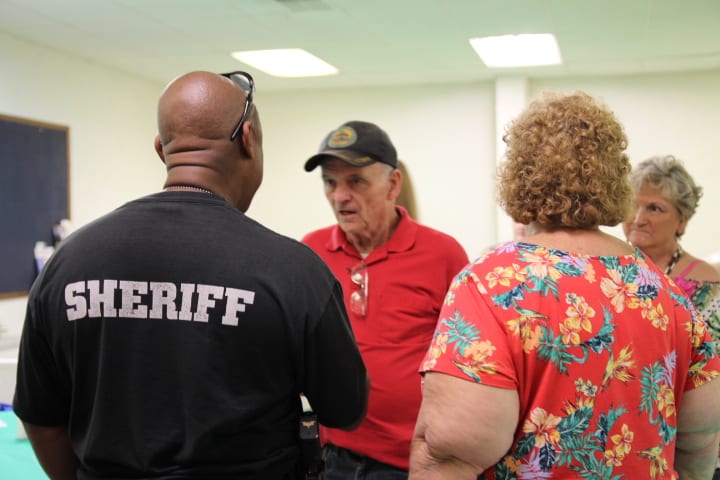 Now that Sheriff Victor Hill has been suspended from his duties pending the outcome of U.S.A. v. Hill, what happens next?

Gov. Brian Kemp suspended Hill June 2 as sheriff, based on the recommendation of a three-person committee Kemp had appointed. That committee included state Attorney General Chris Carr (a white Republican and the state’s top legal officer) and Sheriffs Alfonzo Williams of Burke County (a Black Democrat) and Frank Reynolds of Cherokee County (a white Republican).

Put down your weapon

Hill cannot use his badge, service weapons, and arrest powers as sheriff. However, he still holds the office to which he was elected and the title that goes with it. He will continue drawing his paycheck (Hill’s current annual salary is $155,829.28) during the suspension period, which will last until the end of the trial or the end of his term in office, whichever comes first.

Georgia POST requires Hill to notify them of his suspension, as well as of his arrest and federal indictment, within 15 days. According to that schedule, POST already should have had notice of the April 27 indictment, to which Hill pleaded not guilty.

Hill is charged with violating the civil rights of four pretrial detainees “under color of law”–meaning he allegedly misused his power by ordering that the men be strapped into restraint chairs as a form of punishment. The U.S. Attorney’s office alleges Hill used “unnecessary force in violation of the due process rights of detainees.” Specifically, both the Fourteenth Amendment of the U.S. Constitution and CCSO’s own Inmate Restraint Chair policy prohibit using a restraint chair in the way the government alleges in its 12-page indictment.

The POST Council can decide whether to “initiate inquiries.” Should it decide to hold a disciplinary hearing or take disciplinary action, the council must notify Hill in writing by certified mail or hand delivery.

In case of an “adverse action,” Hill would have 30 days to request a hearing and respond under oath to any allegations in writing.

But Hill’s POST certification would not be revoked prior to the verdict in the federal criminal trial.

If he is found not guilty, he can go back to work. If he is convicted–or if the case drags on past the end of his term in 2024, he will be out.

What’s not clear is whether he can still announce a fifth run for office while under indictment and suspended. The issue could come up at the next regular meeting of the Clayton County Board of Elections and Registration, scheduled for Tuesday, June 8 at 4:30 p.m.

Georgia POST Executive Director Mike Ayers told The Clayton Crescent that POST credential suspension is a “fairly routine” procedural matter. He added that there is no particular number of suspensions that could result in an officer’s losing POST certification altogether, and that each instance depends on the facts surrounding the event.

“Ususally when an officer is charged in a felony case, it is determined by POST–actually, by myself–whether it is appropriate to conduct a review pending the outcome of the investigation,” Ayers explained.

Revoking an officer’s POST credential is “a lengthy process that we do,” he said. “What we’re dealing with is a civil issue that will probably not be dealt with until the criminal issue [U.S.A. v. Hill] is completed.

Meanwhile, Hill himself issued a statement late Wednesday that he plans to “take this time to train and meditate so that when I return, any ground loss will be regained.” Lately, Hill has posted photos with a swan he has nicknamed “Qi Gong” that comes to visit him when he does his tai chi routine:

The day before he was suspended, Hill seemed in good spirits, paying a visit to 102-year-old Elsie Overton and greeting supporters.

The Clayton Crescent left phone and e-mail messages with Hill’s criminal defense attorney, Drew Findling, seeking comment on Hill’s suspension and requesting an interview with Hill. Findling had not responded by press time.

Meanwhile, on the Nextdoor social media app, supporters and detractors went at it with hundreds of posts, some factual, some not, about Hill.

Many Clayton County residents are angry at Gov. Kemp and say his actions against Hill are racially motivated. Many also expressed fears that crime would increase in Clayton County without Hill as sheriff, and that Kemp would appoint a new sheriff to take Hill’s place.

State law provides for the next in command, in this case Chief Deputy Roland Boehrer, to take over when a sheriff is suspended. Boehrer is himself a named defendant in Jones v. Hill, a federal civil suit alleging Hill and CCSO did not take sufficient steps to prevent the spread of COVID-19 in the Clayton County Jail.

Another unsubstantiated claim making the rounds is that Mitzi Bickers is actually running CCSO behind the scenes.

Bickers, a minister and political operative, ran Hill’s 2012 campaign for sheriff. Hill hired her as a correctional officer making $37,708 in 2016, then as chaplain in 2017 ($48,827.13) and 2018 ($51,314.64) at CCSO after federal agents seized her Lake Spivey home and vehicles as part of a massive Atlanta City Hall corruption indictment involving two contractors. Bickers has pleaded not guilty.

However, Clayton County Chairman Jeff Turner said, Bickers is not Georgia POST-certified and thus could not officially serve in the sheriff’s role.

Meanwhile, Hill’s massive blue flag still flys at the corner of Old Dixie Road and Riverdale Road near I-75, although at half-staff in honor of the late Commissioner Sonna Singleton Gregory.

Hill had posted a photo of himself and Gregory to Twitter on May 28, noting that Gregory had been Hill’s first public information officer:

“The night Clayton County’s beloved Commissioner Sonna Singleton-Gregory was first elected in 2006, Sheriff Victor Hill was at her side watching her victory numbers come in. Commissioner Gregory worked at the Sheriff’s Office as the Sheriff’s first PIO! She will be missed!”

The Atlanta Journal-Constitution has an excellent timeline of Hill’s tenure as Clayton County sheriff and we recommend it.