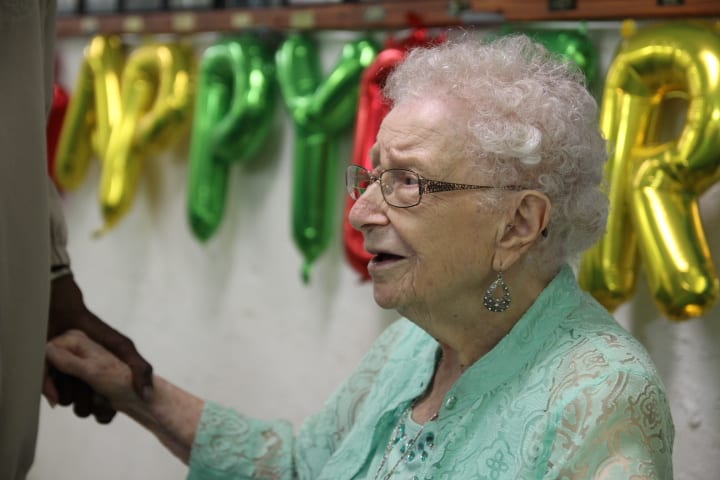 “When I was 6 years old, I went to school… then we moved to Cobb County and I stayed there until ’62,” she said. “I went to Powder Springs High School all the way through. We just had eleven grades then. We didn’t have twelve grades. There were just eleven. W.P. Sprayberry was the principal–you’ve heard of him? He was a wonderful principal. And his wife was my teacher. And she was a good teacher.”

“I remember seeing my daddy come up the road with a 25-pound sack of flour on him,” she said. “And I ate a lot of gravy and biscuits. And I still love ’em! And I lived through the Great Depression. My daddy drawed his money out the bank three days before it went busted and bought a new car. And he lost $3.”

“I went to Powder Springs Baptist Church until I was 17 years old,” Overton said. “And then I met my husband. He was from Austell. Lou Cox. We had three boys. And you know all of them are dead? All three of my boys are dead. And my husband. We had a wonderful life.”

“I’ve had a wonderful life. I worked for Avon Products. I worked in the credit department, 22 years, and I retired in 19 and 83. I’ve been drawing a pension all these years and I don’t think they thought I’d live this long!” Overton chuckled.

“I think I’ve outlived all my Avon friends, and all my school friends, I’ve outlived them. I don’t think there’s any of them still living,” Overton said. “And I just have a host of friends. I had my hundredth birthday and I had 108 people there. I had a wonderful experience with Avon. They was a good company. I worked the first few years in the shipping department, and then I went to the office, and I spent my last 12 years in the credit department. One of my bosses came up here 45 years ago, he came to my party. I had some wonderful experience with them. And I drawed a pension all these years. I don’t think they thought I’d live this long. I’ve outlived nearly all my Avon friends. They’re all just about gone.”

Her twin great-grandchildren eyed her shyly.

“Give Granny love,” their mom prompted.

Miss Elsie has trouble with her eyesight now, so she has had to let some of her pastimes go.

“I used to do a lot of crafts, but I’m almost blind now, I can’t do anything, and I spend a lot of lonesome hours by myself,” she said matter-of-factly. “I live in the Ashton Walk Apartments and I have a lot of friends there. And I have four grandchildren. And I have two grown granddaughters and a grown grandson.” They’re in New York and Dalton and Apex, N.C.

“It’s more commercial now than it was,” she said. “I was just used to it being laid back. It’s not that way now.”

“Happy birthday!” Hill said. “I came to deputize you. Here’s a badge making you an honorary deputy. I got you a whole starter kit.”

“I understand you cleaned Clayton County up from drugs,” Overton said.

“Please do away with the drugs,” she pleaded.

He presented her with a badge, keychain, money clip, and other departmental swag.

“I brought you a keychain,” Hill said. “That way, if the cops stop you, they know to leave you alone. The most important thing I brought you is a challenge coin.”

“I’m honored you came to see me,” Overton said as people snapped their picture.

“Awesome. Thank you for your words of encouragement,” he said.

Throughout her chat with The Clayton Crescent, partygoers asked to pose for photos with “Miss Elsie” and showered her with hugs, cards, gifts, and birthday wishes:

“You are just a beautiful lady, and I hope you have many, many more.”

“I love you, Miss Elsie, and I enjoyed your party. Happy one hundred and two!”

“I love you. We enjoyed it. We’d stay longer but I’ve got to get home before the traffic.”

“See you in church!”

The gift of family

Of all the gifts Miss Elsie received, the one that moved her to tears was a photo of her with her three late sons, taken at what she thinks was her 85th birthday party.

It was a great gift to have Luke, David and Phil at this party, too.