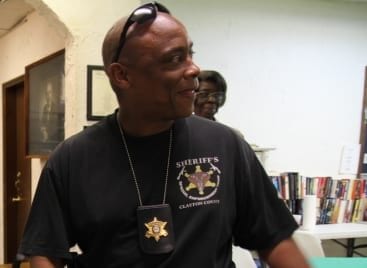 Governor Brian Kemp has ordered that Sheriff Victor Hill be suspended immediately at the recommendation of an appointed state panel.

The move comes following Hill’s April 19 federal indictment on four counts of felony deprivation of rights under color of law, related to Hill’s alleged punitive use of restraint chairs in the Clayton County Jail. Hill’s attorneys have until Monday, July 12 to file pretrial motions in the federal case, U.S.A. v. Hill. A pretrial conference is set for 9:30 a.m. on Wednesday, July 14.

Hill also is a named defendant in the federal civil suit Jones v. Hill, brought by 12 current and former inmates of the Clayton County Jail who allege he did not do enough to prevent the spread of COVID-19 inside the facility.

“Today, I have been placed on suspension until I am exonerated in court. I am very honored to have the outpour of support I have received and I thank you all for it. I will take this time to train and meditate so that when I return, any ground loss will be regained. Until then may GOD bless you all, and may he continue to bless Clayton County.

On June 1, the commission submitted a report–which under state law is secret–finding that the indictment “does relate to and does adversely affect the administration of the office of Sheriff, and that the rights of the public are adversely affected” as a result.

According to WSB’s Mark Winne, part of the report reads as follows:

“Although the Commission recognizes and gives weight to the Sheriff’s overwhelming popularity in Clayton County, the alleged restraint chair use by the Sheriff is not mitigated by his popularity. Indeed, the public – including citizens outside of Clayton County – has the right to trust that inmates are treated fairly and with respect while ensuring the safety of the detention center. In this situation, however, Sheriff Hill administered punishment without any justification for physical punishment.

“These pervasive unprofessional standards affect the administration of the Sheriff’s Office, and the suspension of Sheriff Hill is the appropriate measure given the widespread acceptance of the Sheriff’s principals.”

The commission “recommended that Victor Hill be suspended from office” under O.C.G.A. 45-5-6.

Clayton County Board of Commissioners Chair Jeff Turner told The Clayton Crescent the sheriff’s duties would fall to Chief Deputy Roland Boehrer. Turner said he had not spoken with Hill as of press time.

Hill, who has not been convicted in the restraint-chair case and has said the case is politically motivated, will continue to draw a paycheck while suspended, Turner said.

Under state law (O.C.G.A. 15-16-8), the chief deputy steps into the sheriff’s role (if a chief deputy has been appointed, as in Clayton County) to fill any vacancy. In counties without a chief deputy, the probate judge can appoint an interim sheriff. If more than six months are left in the sheriff’s term (as in Hill’s case), the county elections superintendent “shall call a special election to fill such vacancy.”

However, a suspension isn’t the same thing as a vacancy. Hill is still in office until he is either convicted in the federal case, or his term runs out.

Turner pointed out, “With suspension, if he is convicted, then a special election will be held, but the chief deputy will become the interim until the election.”

However, the law also says that if the Georgia Peace Officer Standards and Training Council were to revoke Hill’s certification, “the office of sheriff shall by operation of law be deemed vacant upon certification…to the judge of the probate court in the county that the certification required to be a peace officer has been revoked for the sheriff of said county.”

In 2012, Hill’s POST certification was suspended after a Clayton County grand jury indicted him on corruption charges. In the interim, he won reelection as sheriff. Hill was found not guilty on all counts.

In 2017, Georgia POST put Hill on two years’ probation after Hill pleaded no contest to misdemeanor reckless conduct after shooting real estate agent Gwenevere McCord in a Gwinnett County model home. Hill had said he was demonstrating police tactics at the time. McCord, who lost a kidney, later went to work for Hill. Opensalaries.com, a website that aggregates public employee salary data, listed McCord as making $46,460.19 as a public information officer in 2019. That same year, WSB’s Tom Jones reported, another CCSO employee, jail clerk Sharon Cunningham, was fired for reporting that McCord–then a service clerk supervisor and Cunningham’s boss–was suspended for five days without pay after allegedly giving a lap dance to another deputy. Cunningham was fired for gossiping and providing false information, which she denied was so.

The Clayton Crescent left a message for Hill’s criminal defense attorney, Drew Findling, seeking comment on the suspension, as well as with Hill’s spokesman,

Hill has a vocal following, a tightly-controlled public relations machine, and has been elected four times to the sheriff’s seat.

Critics (including former CCSO employees) accuse Hill of running CCSO like a dictatorship, firing employees for minor infractions, feeding detainees “nutra-loaf” as a punishment, and famously demanding that detainees “face the wall” when he enters the jail. Attorneys for the Southern Center for Human Rights, the American Civil Liberties Union, and the Georgia ACLU have brought cases alleging Hill or his deputies have abused suspects and pre-trial detainees.

Then there are more personal arrests, such as those of former CCSO Deputy Robert Hawes and his wife, graphic designer and publisher Gerrian Hawes (transparency note: Gerrian Hawes has done freelance design work for The Clayton Crescent) and of Glenn B. Howell, a landscaper who got into a dispute with CCSO Lt. Josh Guthrie over some work done on Guthrie’s property. Howell is one of the named plaintiffs in U.S.A. v. Hill, the federal restraint-chair case that prompted Gov. Kemp to suspend Hill.

But Hill’s supporters love his strongman tactics, saying they’re what’s needed to run criminals out of Clayton County. Hill has not spoken directly with reporters in years, instead posting news of arrests to Nixle, a commercial online site marketed to law enforcement officials. Hill’s versions of arrests are anything but routine, always containing taunts aimed at the suspect and bragging about the accommodations awaiting them at the “Hill-ton,” the nickname for the Clayton County Jail under Hill’s tenure.

A federal indictment alleges Bickers “conspired to enrich herself and others by soliciting and accepting payments from [Elvin R.] Mitchell and [Charles P.] Richards, in exchange for her agreement to represent their companies in obtaining lucrative City of Atlanta contracts.” Bickers has been charged with 12 counts, including bribery, money laundering, witness tampering, and tax evasion. Hill hired Bickers, an ordained minister, as a chaplain, then created the position of chief chaplain and promoted her. This was after federal agents seized Bickers’ $775,000 Lake Spivey home, Waverunners, and luxury vehicles. That indictment alleges Bickers’ tax returns showed she made just under $58,000 per year from the city of Atlanta.

Check back with claytoncrescent.org for updates.