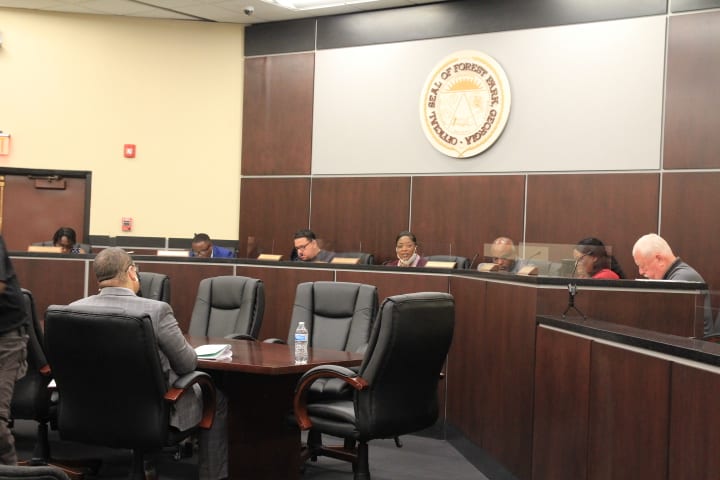 Councilman Héctor Gutierrez made a motion for a contract with the law firm of Bondurant, Mixon and Elmore to dispute Butler’s veto of a 3-2 council vote that had overturned Fire Chief Don Horton’s termination. City Manager Dr. Marc-Antoine Cooper fired Horton after Public Safety Director and Police Chief Nathaniel Clark brought in a Fairburn Police officer to conduct an investigation.

Butler had recused herself from Horton’s appeal hearing, then “un-recused” herself to veto the council’s decision.

Butler, along with Human Resources Director and then-Acting City Manager Shalonda Brown, had filed sexual harassment complaints against Horton. Horton had repeatedly sent text messages to Brown, telling her she was “looking good,” and had made comments that he had characterized as “jokes” to both Brown and Butler. In one incident, Horton said, he was joking about Atlanta residents eating a lot of chicken and had asked the mayor to stand up, then looked behind her to see whether or not she had laid an egg. Butler told investigators that Horton had tried to take her hand, but that she pulled it away and gestured for him to step back. Brown later intimated that Horton had been looking at the mayor’s rear end. Horton said he had indeed made the joke but denied looking at the mayor or texting Brown with any sexual intent.

After the veto, a handful of firefighters later picketed City Hall to protest Horton’s ouster, saying he had done much to improve the department’s living and working conditions. Horton told The Clayton News that he had not been aware of the picket in advance but stopped short of saying whether he would be taking legal action against the city.

“I sure hope you guys bring it,” Butler said after the vote.

Mears said, “I think it’s a waste of the taxpayer’s money. The man admitted guilt. He apologized over and over for the things he said. The mayor has more to worry about than one person.”

He added that Horton, in Mears’ words, “admitted guilt in his own paperwork. I don’t see any sense in spending the taxpayers’ money–out of reserve–when the man’s admitted guilt.”

During closing remarks, Akins-Wells said, “I don’t feel like our chief of police should have had anything to do with [the investigation] from the get-go, and hand-picking who the investigator was going to be. I don’t feel like a victim should be the victim and a judge. That was unethical to me and something definitely needs to be done about that.”

Akins-Wells said the city charter allows the mayor to veto ordinances and resolutions, “but it says nothing about an appeal hearing. That’t it. When we have three affirmative votes, that’s it. You can’t come in and then recuse yourself and then un-recuse yourself.” She likened the situation to a murder victim’s relative in a courtroom recusing themselves “and then when they don’t get life, you come back in and say, ‘oh no, I don’t like that, I want to un-recuse myself.’ It doesn’t work like that….So something needs to be done about the whole process, because it was not right.”

The city charter states that “Neither the mayor nor any member of the city council shall vote upon, sign, or veto any ordinance, resolution, contract, or matter in which he is personally interested.”