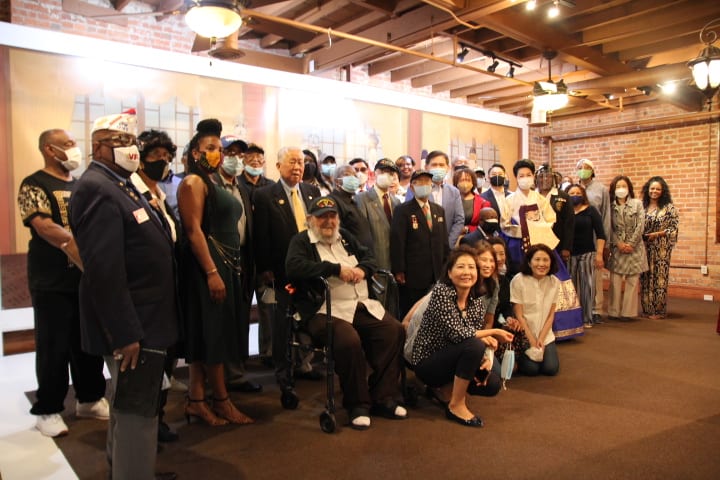 It’s called “The Forgotten War.” But the people of the Republic of South Korea have not forgotten what U.S. troops did for their country seven decades ago.

State Rep. Mike Glanton (D-75, Jonesboro), the Consulate General of the Republic of Korea in Atlanta, and Arts Clayton hosted a thank-you luncheon for veterans to see the Hanbok exhibition and to express their gratitude to Korean War veterans.

Hanbok is Korean traditional attire, which is decorated to indicate a person’s status–for example, as royalty or as a soldier. The exhibit, courtesy of the Hanbok Technology Institute, is on display through Thursday, May 27 and features both full-size and miniature historically accurate reproductions of traditional Joseon Dynasty hanbok of all kinds, as well as samples of antique children’s socks and shoes, contemporary ceramics by artist Moon Hee Kim and silk Gyubang gifts for sale, and displays of royal family and traditional Korean wedding attire.

More than 36,000 Americans and more than 1.2 million South Koreans were killed in the Korean War. Another 7,559 American troops are still missing. The war started on June 25, 1950, when about 70,000 troops from the North Korean People’s Army, with backing from China and the Soviet Union, attacked what is now known as South Korea. Japan had occupied the Korean Peninsula until its defeat just five years earlier during World War Two. U.S. troops were still there, training Korean forces in the south, and the United Nations Security Council called for member states to defend South Korea. Technically, the Korean War–or Korean Conflict–was never a declared war on the U.S. side. Whatever it is called, it has never ended. The U.N Command, China, and North Korea signed an armistice on July 27, 1953 creating the Demilitarized Zone, or DMZ–the Cold War’s nuclear line in the sand–just two and a half miles wide. South Korea did not sign the agreement. The country was split at the 38th Parallel and remains so to this day.

“I would like to take this opportunity to express my deep gratitude to the esteemed Korean War veterans for your service to the nation, especially for your service to my country, South Korea, during the Korean War seven decades ago,” Byung-chul said. “I would also like to thank Rep. Mike Glanton, who is also a United States Army veteran, for hosting this luncheon and for inviting us to sponsor this wonderful event. It is truly my honor and joy to sponsor this luncheon in your honor as a token of our appreciation.”

“One of the things I like about Mike…he loves veterans,” Jordan told the group. (Glanton is himself a veteran.) “And we love taking care of veterans. And when you’re talking about veterans, you’re talking about families. A veteran has a family. And we have thousands of members who served back then in Korea, who serve now in Korea, and we want them to know that was an honor to serve the Korean people. Because the Korean people is one of the very few nations that America can really count on. And so we just want to thank you for inviting us here, and let you know America will always stand for Korea. Every year, the Veterans of Foreign Wars goes before Congress and makes sure that, no matter who’s in the White House or who’s in the Senate or Congress, that they make sure that they keep in their program that Korea always has to be protected by the United States of America.”

The Korean community and veterans presented Glanton with a traditional Korean umbrella reserved for royalty, signed by the veterans.

Among the veterans honored was my father, Jim Kemp (Sgt. 1st Class), who served as a combat correspondent with the First Cavalry Headquarters Division–an assignment that prepared him for half a century in the news business, from the Galveston Daily News to WDSU (Lee Harvey Oswald and the Kennedy assassination), WVUE, KDKA (the Pittsburgh riots when Dr. Martin Luther King was assassinated), and CNN’s National Desk (from 1983 to 2001). He’s 89 and doesn’t get out much anymore due to poor health. But when he got the invitation, he was all in. It literally took an act of state, or at least an act of consul, to get him to pull his failing legs into my mother’s car, inch his walker along Main Street in downtown Jonesboro, and make his way through the exhibit.

Dad says he went to Korea to look for his big brother, Richard, who was a correspondent for Stars and Stripes and who served in World War Two, Korea, and Vietnam–twice. (Dad jokes “Dick was always a slow learner.”) Their stepfather, Rudolph Plath, had been a naturalized German citizen who served as a U.S. Merchant Marine in World War Two, supplying oil to U.S. forces in the Atlantic Theater.

“Daddy Rudy,” who was a chief engineer with a Navy gunner commission, first served aboard the Atlas, which was torpedoed off the Outer Banks of North Carolina by one of many Nazi U-boats patrolling the Eastern Seaboard. He reportedly saved at least one and possibly two crewmates. The policy was that, if you had survived such an attack, you did not have to go back out. But he did, aboard the Broad Arrow. That tanker was torpedoed January 9, 1943 off the cost of Suriname and lies, with Daddy Rudy, in over a thousand feet of water, at 07°35’N, 55°45’W.

So as Gold Star children, it’s not much of a surprise that Uncle Dick and Dad would seek out military service. Dad and Dick did meet up in South Korea. We have a photo of the two of them, posing with reporters’ notebooks and pens, interviewing each other.

Along the way, Dad saw combat, sent dispatches from the front, and photographed everything from dead bodies (photos which my mother made him throw out years ago) to a little girl standing outside her house, holding a bunch of flowers:

It was her photo, as well as a couple of others, that Dad took to Arts Clayton on Monday.

“She would be in her seventies if she survived the war,” he said wistfully.

The little girl’s photo drew plenty of interest as people speculated whether it would be possible to find her, to find out what had happened to her.

“She should be someplace in Korea,” Shreve said. “Did you ever…?”

“She would be 70 years old, at least,” Dad added. “I hope she survived… she was a little girl, standing outside her house, with a bouquet of flowers.”

“This is the most important picture,” Shreve said.

“The little girl, just standing there with her bouquet of flowers,” Dad said. “I’m sure hoping that we were not gonna, you know, burn her house down, or kill her with all her family. There was very little of that in Korea, but there were some instances….We were passing through, we were on our way, walking.”

Dad’s note on the back of the photo places the girl in “Yongdung-po, Korea, 1951.” We think it was taken in Yeongdeungpo-gu, today a cosmopolitan district in Seoul.

“I was born maybe 15 minutes away from it!” Shreve exclaimed.

“I have a lot more than that,” Dad said of his photos, “but that’s my favorite. That little girl’s my favorite….I hope she made it through the war.”

He also brought a photo of himself and another soldier, holding Russian rifles he said they’d taken from Chinese soldiers. He doesn’t say how they did that.

Dad doesn’t talk about the war itself that much. When he came back from overseas and got into a cab, he told the driver he’d just gotten back from Korea.

“Who gives a damn,” snarled the cabbie.

Apparently, quite a few people did.

“I assure you, once again, that we Korean people have never forgotten, and will never forget, what you did for my country and for the world,” Byung-chul said. “I hope and pray that you live a long, healthy life. May God bless you.”

Dad was not the only Korean War veteran at Arts Clayton. But he is the one that I have known all my life. Seeing him connect with other vets I know from Clayton County and with members of the Korean community, after seven decades of mostly privately-held memories, was profoundly moving. The war shaped him, from a 19-year-old full of Texas swagger and eager to serve, to a man who said one tour of duty and four campaigns were more than enough and who has not picked up a gun since. He has always been a humane individual–it is in his nature–but I am certain that the brutality of what he experienced during the Korean War only makes him love humanity all the more.

Consulate General of the Republic of Korea in Atlanta: https://overseas.mofa.go.kr/us-atlanta-en/index.do