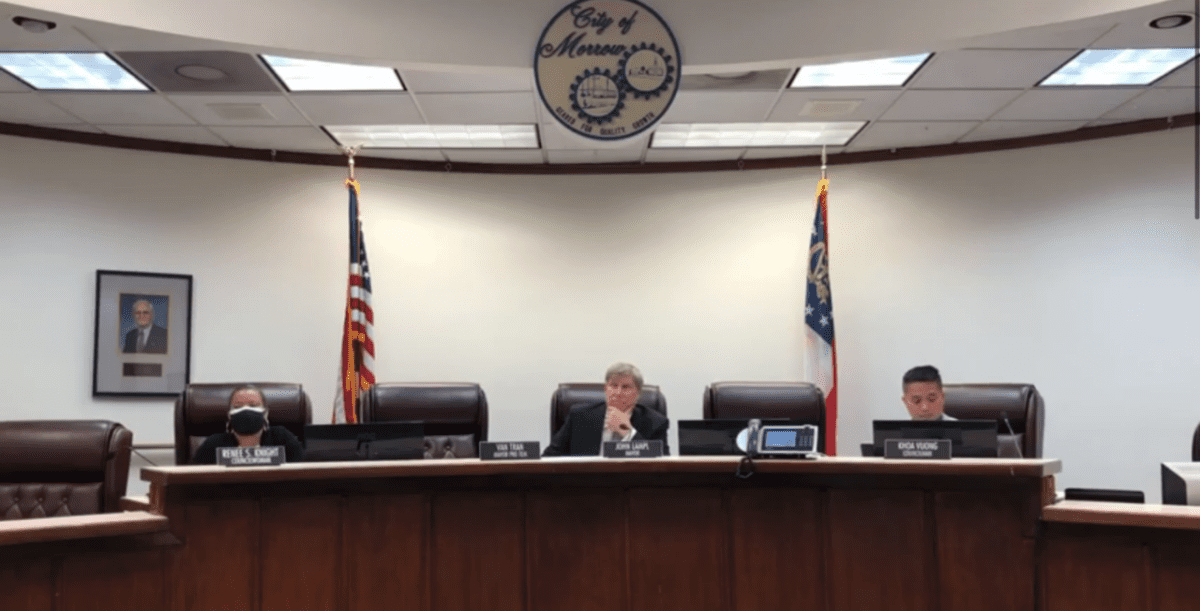 The City of Morrow will decide tonight whether to change the city’s charter. Critics of Mayor John Lampl characterize the move as a power grab. Lampl did not respond to a request for comment.

Under the current city charter, the city attorney’s powers and duties include “[attending] any council meetings in their entirety upon request of any member for the purpose of giving the mayor and council any legal advice requested of its members” and “[preparing] for execution all contracts and instruments to which the city is a party when so requested; and approve, as to form, all bonds and city contracts.” Morrow is represented by the law firm Smith, Welch, Webb and White.

The council also will give a first reading of another proposed ordinance that would give the mayor the power to appoint Planning and Zoning Board officers instead of having board members elect them.

The proposed changes would give either the mayor or a majority of councilmembers the power to:

The ordinance up for a vote tonight would remove those duties and replace them with the following language. Boldface type indicates red-letter changes included in the agenda packet. Brackets indicate new language that does not appear in the existing city charter:

Lampl’s expertise is in real estate, which has been the focus of most of his lengthy work session agendas. He has said that the city cannot get its economy moving until it gets more businesses to open. Part of attracting businesses is having the right location, which includes businesses finding the right property for their needs.

At the same time, the proposed changes to the city’s charter would give any Morrow mayor broad powers to sign contracts and bonds, on his or her own, without prior council approval or public scrutiny. In addition, the power to choose the planning and zoning chair proposed in Ordinance 2021-03 could eliminate any chance that a previous appointee might have the final say on any issues that could delay or block proposed developments. With a single vote making all the difference on a five-member board, a mayoral appointee could be counted on to break any tie.

The Georgia Municipal Association, which is a statewide advocacy group representing 537 Georgia cities, offers a model city charter. That document indicates that a city’s council should be who makes or authorizes any contracts on the city’s behalf. In addition, a contract has to be in writing for it to be binding and the city attorney has to draw it up or review it, as well as sign it as proof of that review. GMA says that the city’s attorney or law firm should be treated as an independent contractor and not as a city employee.

While the model charter does not supersede the city’s existing charter, it does provide examples of generally accepted practices in Georgia municipal government.

GMA’s model ordinance says that city councils “shall” appoint board members, “except where other appointing authority, terms of office, or manner of appointment is prescribed by this charter or by law.” Members serve at will and can be removed by “a vote of ___ members of the city council unless otherwise provided by law.”

As for who decides to run a board, GMA’s model charter reads, “Except as otherwise provided by this charter or by law, each board, commission, or authority of the city shall elect one of its members as chair and one member as vice-chair, and may elect as its secretary one of its own members or may appoint as secretary an employee of the city. Each board, commission or authority of the city government may establish such bylaws, rules and regulations, not inconsistent with this charter, ordinances of the city, or law, as it deems appropriate and necessary for the fulfillment of its duties or the conduct of its affairs. Copies of such bylaws, rules and regulations shall be filed with the clerk of the city.”

One of those members, Planning and Zoning Board Chair Wayne Collins, confronted Lampl during the March 9 council meeting.. Collins alleged that Zoning Administrator Marti Tracy, who serves as the board’s staff secretary and does not have a vote, had called him three weeks before to convey a message that Lampl allegedly wanted the board to appoint Clayton County Film and Tourism Board President Tamara Patridge as Planning and Zoning Board chair. (Patridge serves as a member of the board.) He also alleged that City Manager Sylvia Redic also had made it clear that Lampl wanted Patridge to replace Collins as chair.

Collins said he tried to call Lampl but that the mayor did not return his call, and characterized Lampl’s move to appoint a board chair as “disrespectful.”

“Why would I do that, because the board selects who they want to lead them?” Collins asked.

Collins then said, “You know, it makes me think no lessons have been learned over the years. And I went to each council member, and I got a different story. Even the moratorium that you’re trying to put in tonight, I asked questions about it, no one can give you a clear answer. Nobody’s reading the charter. Read the charter. The charter tell you. Read it for yourself. But what you did was wrong. What you did was wrong.”

“I called you,” Collins said.

“I’m aware of what the conversation was,” Lampl replied.

“I called you. You didn’t return my call.”

“Yeah, you right, and it’s my choice to do it publicly,” Collins said.

“That is, that’s your choice,” Lampl said. “As a citizen, you have a right to do whatever you want.”

Collins replied, “Well, as a mayor, you don’t.”

“Well, what I can say is this,” Lampl said. “And this is me calling it, just like you called it. When you’re on a team, there are ways to be able to do that at work. And there are ways to tell ’em. Your choice. Doesn’t matter to me. You know, but as a citizen, you’re trying to do whatever you want when you play on this team. You know, I don’t know that that holds up.”

“I do, too,” Lampl said “And… it’s a choice. There’s five of them. There are other people on the board that are fine, too. But if I had to go with a choice, I’m going to go with what I believe to be the best foot forward for the decision. I’m not saying that everybody will agree with me. Didn’t ask them to. I’m just saying, to move this city forward, in a time period where it’s tricky, I’m going to go with the safest bet that I have. That is fair, alright? And it’s not anybody being mean to you.”

Collins said, “I can respect that. What I’m saying is, respect me. Don’t have Marti and Sylvia doing your bidding to me. “

“Well, to be honest, when I heard it, I wasn’t happy about that,” Lampl said. “Yeah, for a lot of reasons. You’re right. Totally unfair. That’s not good politics, that’s not even good common sense, okay? But it happened. There seems to be some fairly decent excuses behind the scenes as to why it happened. But I’m a big boy, you know? So you look at it, so it didn’t go the way I wanted. That wasn’t my instruction, if you want to put it that way. But if somebody said would I prefer that Ms. Patridge could be the chairperson, the answer is yes. For the reasons stated.”

“It’s not proper chairmanship,” Collins said. “It’s the way it was handled.”

“Not that part–I totally agree,” Lampl replied. “It was a public statement, you received my public response. That way, there’s nobody hiding.”

“And was it fair to you? No,” Lampl said. “Did it come from me that way? No. We’ll do better. Okay. Now, do we still value you on the team? Yes. How do you know that? You’re still on the team. And you’re mad at stuff that happened.”

“That makes sense,” Lampl said. “But I promise as the net worth slowly gets out there, as our communication skills slowly improve–they’re not perfect, you see it, so do I. But I still think they’re better than they were, I still think we’ve got a whole lot of good things in front of us, and let’s focus on those. That’s fair. Meeting adjourned.”

Neither Lampl nor Tracy responded to e-mails seeking comment by press time.

Members of the public who turn to the Planning and Zoning Board minutes to find out what the board is doing will find few answers for 2021.

The December 7, 2020 special called meeting minutes show Gilda Hutcheson as chair, Wayne Collins as vice-chair, members Aaron Mauldin and Joyce Bean, and Tracy as secretary were all present; Patridge was absent. The board unanimously approved a subdivision of “the tract containing 1705 Mt. Zion Road from the parcel of land containing 1791 Mount Zion Road.” County tax records show 1791 Mount Zion Road is owned by WIP Mt. Zion LLC, a New Jersey-based company whose Georgia corporate mailings are in care of Widmont Properties, a development company. The request passed with the condition that the preliminary plat be revised to include “a 20 feet wide easement to access Mount Zion Road.” No listing for 1705 Mt. Zion Road appears in online county tax records.

After that, the record is sparse.

The city’s link to minutes of a special called meeting on February 23 show minutes dated December 7, 2020 and approved March 16, 2021 indicating Tracy, who is the board’s secretary, Patridge, and other board members were present but that Collins, who is listed as vice-chair, was absent. No chair is listed and the only description of what transpired is “General Planning Discussion with Mayor and Council.”

The last published agenda of the Planning and Zoning Board (April 20) only listed Collins as chair and contained almost no substantive information about what was to take place, other than approving the March 16 minutes and calling for vice-chair nominations.

However, the April 20 minutes list Collins as both chair and as vice-chair and show that Patridge was absent. Despite this, she was elected vice-chair: “Chair Wayne Collins called for nominations. Chair Wayne Collins nominated Member Tamara Patridge. Because Member Patridge was not present to accept the nomination, Chair Collins stated that, if she does not want the position, we can have another election. Chair Collins closed the nomination and called for a vote. Member Tamara Patridge was elected Vice Chair pending her acceptance of the nomination.” The meeting lasted six minutes.

Tonight’s work session, where discussions take place, starts at 6:30 p.m.. The regular meeting, during which proposed ordinances are read and voted upon, starts at 7:30 p.m.

Also tonight, a public hearing will be held on a proposed 120-day moratorium on permits, licenses, or inspections in the mixed-use district.

Under the Lampl administration, detailed work sessions–which are open to the public–often resume after the regular meeting has adjourned.