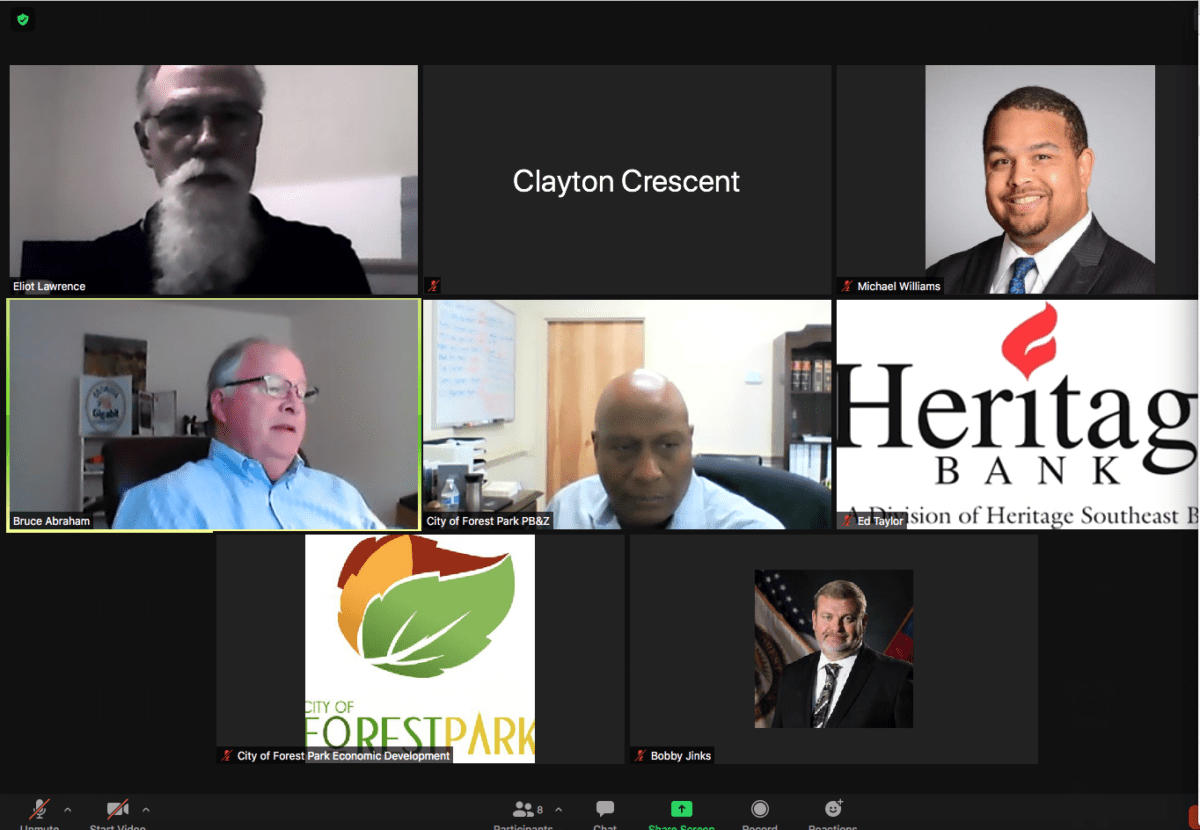 The Forest Park Urban Redevelopment Agency voted 4-0 April 9 to approve a bond package to finance $41.1 million in capital improvements that will change the face of Forest Park’s moribund Main Street, boost the city’s economy, and gives the green light to a new City Center complex that has been fraught with controversy along the way.

The City Council had approved the bond deal in a special called meeting via teleconference less than 24 hours earlier.

“This has been a longstanding process and I am glad we are at the finish line,” Mayor Angelyne Butler said.

Butler told The Clayton Crescent that people could expect to see physical changes to the cityscape taking shape “hopefully by the fall but no later than the end of the year.”

She added, “I hope the residents share in my excitement. This is really huge for us.”

No one was present for public comment at the meeting.

Emory University Goizueta School of Business professor Tom Smith told The Clayton Crescent, “This kind of investment in Forest Park’s downtown area will likely have a strong economic ripple effect. Facilities like the Amazon and Kroger distribution facilities will not only pay workers, but those jobs will support restaurants and other retail in the area. Similarly, the renovation of Starr Park will create opportunities for other small businesses in the area.”

Board member Eliot Lawrence asked City Attorney Mike Williams to explain the difference between the A series and B series bonds.

“The A series is linked to SPLOST projects approved in the last SPLOST referendum,” Williams said. Those 6-year bonds will mature in 2027 and, due to their shorter maturity period, have a lower interest rate of 1.2%. The B-series bonds cover 15 years, maturing in 2036, at a rate of 2.55%, he said. “Those are for projects over and above whar was approved in the referendum–city hall, public safety facilities, those sorts of things that were not specifically part of SPLOST.”

He added that the property will be sold, constructed, then purchased back by the city.

Board members Eliot Lawrence, Ed Taylor, Nachae’ Jones, and Butler voted to pass the measure. Other members were not present on the call until after the vote. Steve Bernard joined the call at 10:05 a.m.

The board then grouped and approved several sets of minutes from previous meetings, thereby making them available to the public and adjourned at 10:07 a.m.

An ebullient Butler told the board, “We just made history.”

Bond validation by a superior court judge is the final legal step before bonds can be issued for capital improvements. No bond validation for Forest Park’s URA had yet appeared in Clayton County Superior Court online filings at press time.Williams told The Clayton Crescent he expects the bond validation hearing to take place the “first week in May. I won’t have a day/time until next week.”

The city kept the Zoom call open for the Downtown Development Authority meeting, which followed at 10:15 a.m. During the break, the board played upbeat music and the mayor sang along to James Brown’s “I Feel Good” (“You guys don’t see me dancing!”), Kool and the Gang’s “Celebration” (“Yes! Can we play this at the council meetings?”), and McFadden and Whitehead’s “Ain’t No Stoppin’ Us Now” (“That is our theme song from this point forward!”).

At 10:15 a.m., the DDA meeting was called to order. Present were Butler, Bernard, Taylor, Jones, Lawrence, and Lois Wright.

Again, no citizens took part in the public comment period.

“Before I start, let me congratulate you, Mayor, and James and Ed, for working so hard on this fine deal that you just passed,” Abraham said. “This is–things are really moving forward for Forest Park. Also James, Mike Williams, you guys really hit a home run with this one.”

Read the scope of work the city sent out to potential PR contractors:

The consultant will “be managed by the Economic Development Department and the Planning and Zoning Department, based on applicable projects” and “focus on development of messages and materials, media relations, promotions through business and general media, and events (when allowed by COVID restrictions).”

Among the jobs it would do:

Abraham said South Atlanta Magazine (based in Clayton County), Leff and Associates (which has done PR work for the city before), The Collaborative Firm (which also has worked with the city in the past), and Phoenix Media Group (known for WIGO, a Christian radio station in Ellenwood) had submitted proposals for various types of campaigns.

Abraham said the staff recommended Leff and Associates, “a very media-intensive, publicity-intensive” firm dealing in both traditional and digital media and which he said was able to deliver headlines in the Atlanta Business Chronicle.

“Our recommendation for this particular project is probably Leff and Associates,” Abraham told the board, adding it was “not so much about city engagement but about getting headlines and branding out there” to draw more attention to Forest Park’s economic development.

He added that the new city manager, Dr. Marc-Antoine Cooper, had expressed a desire to hire a public information officer who could promote the new City Center and Starr Park. Cooper was sworn in four days before the meeting.

“Now this piece with the city manager wanting to carve out some of this, I would recommend you endorse up to $90,000 and talk to Leff and Associates and The Collaborative Firm again to see if they could carve down to promotion of Main Street, the historic property, and new jobs and employers.”

Leff and Associates had proposed a 12-month, $111,000 contract, but was not on the call. Neither were representatives of the other agencies.

The Collaborative Firm’s Michael Hightower, who was the lowest bidder at $92,000, was present and made his pitch to the DDA.

“I took it upon myself to monitor the [call] in case of any questions,” Hightower said. “Bruce, thank you for allowing us.” He praised Abraham’s procurement document for raising multiple considerations–traditional media, collaboration with city agencies and partners, events, engagement– then told the board that branding , while important, is not the be-all and end-all of a publicity campaign.

“Branding is fine but by itself won’t tell the story,” he said. “We have thoroughly addressed the different categories including the branding piece. Also perhaps did at best cost for city of FP. We believe in supporting where we work.” He added that TCF had been “the first firm that put Forest Park on the map 12 years ago” when Weeks Robinson came in.

Wright asked Hightower, “Branding is important, but are you going to address city as whole? We need to sell the city as whole and get the word out because a lot of residents don’t even know what’s going on in the city.”

Butler replied that the purpose of the PR proposal before the DDA was to promote economic development specifically, and that the board had previously declined to approve hiring a public relations officer.

Butler then excoriated unnamed critics who she said were “spreading misinformation” and ignoring the city’s progress.

“With all the good going on in our city, we still have people focusing on the negative because the board did not choose to go forward with the [PIO],” she fumed. “We’ve got so many people spreading misinformation, no information, and it just baffles me how you just continue to focus on the negative…We thought it would be a good idea to get someone to start telling our story. They highlight it and then they get it wrong.”

Part of the problem may be the city’s history of poor working relationships with the press. The scope of work recognized this, noting that the city has no real plan in place to handle routine media relations: “The consultant will help develop media contacts and viable dissemination of information to appropriate media outlets. The City does not currently have a communications person and has no media or community outreach other than through contacts of the Parks and Recreation Department.” Adding a professional with experience in building those relationships could help boost the city’s business profile.

Hightower urged the DDA to focus on the South Metro Development Conference, which his agency hosts and which happened (virtually) three weeks ago. Hightower said this year’s event drew about 1,000 major business players, notable speakers, and publicity from the Atlanta Business Chronicle, Georgia Trend, and the Atlanta Journal-Constitution.

Abraham said, “A lot of this is driven by stuff at Gillem that nobody hears about. He complained that the Atlanta Business Chronicle’s recent coverage of Amazon.com’s “last-mile” investments in four metro Atlanta area locations “barely mentioned Forest Park, which this is a major hub down here for Amazon.”

He added, “Kroger is doing a major expansion of one of its largest robotic centers that’s actually going to deliver groceries to people’s doors” in partnership with Ocado Solutions, and Kalera’s vertical hydroponics facility, which will be “hydroponically growing vegetables in the air.”

Noting that he himself had worked in public relations, Abraham told the board there are two worlds: the inside, which he said tends to be more negative, “and the bigger world outside” that wants to be in Forest Park.

Lawrence said he liked the word “momentum” and appreciated that Hightower had been present at the meeting, then moved the board go with Hightower’s firm. Bernard seconded the motion, which passed unanimously.

“So much of this is just a need to tell the bigger world about what’s going on in Forest Park,” Abraham said.