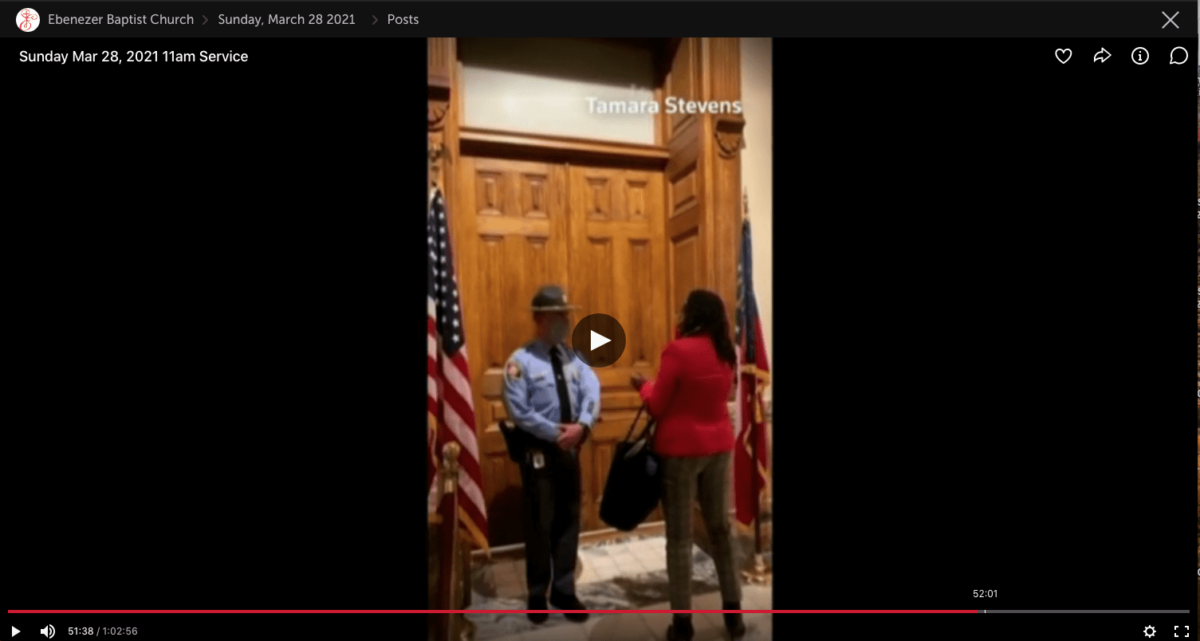 Tuesday, March 30 is sine die for the Georgia Assembly, which has come under national fire in the wake of Gov. Senate Bill 202 into law Friday. Kemp staged a speedy and physically closed signing, flanked by white male GOP floor leadership and backed by a painting of Callaway Plantation, as Rep. Park Cannon knocked at the side door of the governor’s office. After a few minutes, Georgia State Patrol officers arrested Cannon and frog-marched backwards out of the Capitol.

1 question for all who have visited Ga State Capitol, have you ever seen any legislator enter through that door? No….#stageplay Warning: this post is for intelligent ppl only

Stovall, who left the Democratic Party and her Georgia House seat to run as an independent candidate for U.S. Senate, garnered 0.3 percent in the Nov. 3, 2020 open primary, compared to Democrat Rev. Raphael Warnock’s 32.9 percent and Republican Kelly Loeffler’s 25.9 percent.

The Clayton County GOP tweeted that Cannon had no business seeking entry to the signing:

Janelle King from the Georgia Gang put it well: If Park Cannon wanted to watch the signing, she should have “watched online like everyone else.” https://t.co/NPZVOMEJqm

The conservative PAC Heritage Action ran ads in the local TV market urging voters to thank their state legislators,and says it has 20,000 trained grassroots activists keeping an eye on Congress and state houses.

Meanwhile, U.S. Senator Rev. Raphael Warnock, who is Cannon’s pastor at Ebenezer Baptist Church, flew to Atlanta the night Cannon was arrested. He and State Rep. Sandra Scott were at the Fulton County Jail when Cannon bonded out. Two lawsuits challenging the law have already been filed.

Warnock, who has continued his ministerial duties since taking office in January, preached a fiery sermon, “He Should Have Listened to Her,” that mixed church and state while excoriating Gov. Kemp and the Georgia State Patrolmen who had arrested Cannon–culminating in images of her arrest:

Although there is a long history of the Black church and political organizing in the South, a sitting U.S. Senator who is a Black minister rebuking the white governor of Georgia about the arrest of a Black queer female member of the Georgia Assembly is by any measure extraordinary.

On social media, condemnation was swift and severe–from President Joe Biden to Hollywood directors threatening to take their productions elsewhere to people around the country calling for boycotts of all Georgia-based companies, including Delta Air Lines, Home Depot, and Coca-Cola until the law is repealed. They were especially outraged by the fact that SB 202 forbids giving food or water to anyone who is standing in line to vote.

Cannon returned to the Gold Dome today, her arm in a sling, as crowds surrounded the building.

On Friday, The Clayton Crescent filed an Open Recoreds Request with the Georgia State Patrol for the incident reports from Cannon’s arrest The AJC’s Greg Bluestein published a copy of the Friday reports late Monday.

No meetings had been announced by press time this week for the Clayton County Board of Commissioners or the City Councils of Forest Park, Lovejoy, Riverdale, Morrow, Jonesboro, or Lake City. Here’s what else is coming up this week:

11 A.M.: The City of Forest Park is holding what it bills as “the largest egg hunt on the Southside of Atlanta,” sponsored by Nguyen and Pham LLC, the law offices of Morrow Judges Jenny Nguyen and Ethan Pham.

As always, please let us know if you are aware of an important upcoming meeting that is not on the roundup. Email KempWrites@gmail.com or call (404) 547-1171.