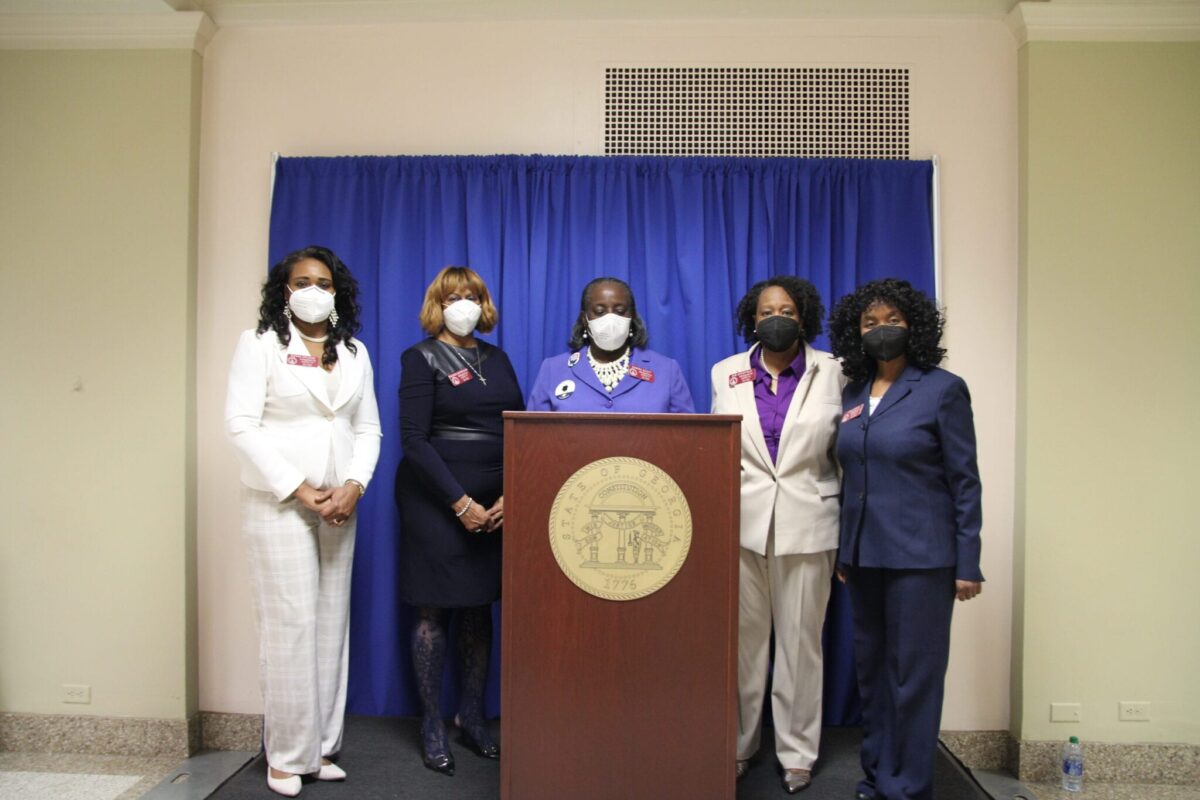 Last year, The Clayton Crescent filed several reports on the benefits crisis, which saw desperate people gathering at county unemployment offices, scribbling their phone numbers on scraps of paper and sticking them in the crack of the door because no one would answer their calls, and swapping tales of their ordeals, even in the pouring rain. The Clayton Crescent attempted to reach Labor Commissioner Mark Butler on several occasions to find out what the problem or problems were but was unable to contact him. (Butler eventually did do an interview with WABE’s Rose Scott in December, in which he said some of his employees had caught COVID-19 and that he was putting in a new web portal for people to file claims.)

In a February 25 press release titled “Georgia Ranks in Top States for Payment Timeliness for Initial UI Claims,” Butler touted Georgia’s #22 ranking among the 50 states for getting out the first unemployment check and “number one among the 22 states” for the number of claims processed. Since the beginning of the pandemic through February 2021, Butler said, GDOL had processed 4,444,838 regular UI initial claims–which he said was more in one year than in the previous nine years combined. Butler also said his office had paid out benefits totaling “more than $18.7 billion since March 21 of 2020, more than the past 41 years combined.”

“No state has processed and paid as many claims as we have at a faster pace,” Butler said.”We have received some tough scrutiny lately for the small percentage of claims not paid that may not even be eligible for payment.”

He added that Georgians should get back to work, rather than depending on unemployment: “We have way too much focus on longer, richer UI benefits and not enough emphasis on getting individuals back in the workplace. We are hearing from employers every day who are looking for quality employees to fill full-time positions that offer benefits and a stable income.”

“When you get these phone calls, and you hear the people crying on the other end of the phone, and they have kids, kids that are impacted,” Scott said, “the psychological, the mental, the pain that this is causing families–through no fault of their own–and the negligence, the pure negligence of this Department of Labor–words can’t even explain it.”

“This is inhumane, what they have done,” Schofield said.”And there is nobody that we can hold accountable? No.”

“An overwhelming number of Georgias have also resorted to calling their State Representatives and State Senators seeking help with getting their unemployment benefits because they had such difficulty contacting staff members at the Georgia DOL,” Bordeaux wrote Turner in a March 10 letter. “In these calls, they express how they are in fear of losing their homes and that they cannot purchase groceries for their families because their unemployment checks never arrived even though they are valid claimants.”

Efforts to pick up the slack have fallen on the county and federal government, as well as local charities. Clayton County has seen numerous and repeated food giveaways throughout the pandemic. Some involve USDA food boxes; others, the kindness of strangers. Clayton County also has wrangled federal CARS Act relief money to bring people current on their rent and help small businesses and nonprofits stay afloat during the COVID-19 crisis.

“We are gathered here this morning to say thank you to our Congressional delegation for hearing our cries of help for our constituents,” Scott said, “who lost their jobs through no fault of their own but could not receive their unemployment benefits and claims in a timely manner. We want to thank them for recognizing the lack of transparency, the discrepancies in the data reported in [Butler’s] press releases, and violations of the federal statutes requiring timely payments of the unemployment benefits.”

Scott said, “We heard from him earlier in the year when it first started out, back in March and April. I think in April, we heard from the Commissioner of Labor, and once again probably around May, sometime.”

Rep. Viola Davis (D-87, Stone Mountain) said, “When we initially had our meeting, he explained to us at that time that there was a backlog of 100,000. But after we analyzed his press releases, we came up with the number more of just over 200,000. That’s when we started doing the Open Records [requests] to try and clarify the information in which we were seeing charges over $2,000 in one claim and $4,000 in another. So it was going to cost us over $6,000 to charge [us] and get to the bottom of what he was actually reporting in his press releases. And that’s when we started asking for help from the Research Department, from the Research Department we went to the Congressional representatives, from the representatives we went to the Attorney General, from the Attorney General we went back to the Congressional. So you can see, we expended every avenue we possibly could, locally and federally, to try and help our constituents.”

What does it mean when one government agency charges another government agency–especially elected officials–for Open Records that they ought to be able to get for free in the course of doing the people’s business?

“It says that they don’t want us to find out stuff. That’s the bottom line,” Rep. Donna McLeod (D-105, Lawrenceville) said. “And we also want to put on record that we have asked the commissioner several times to, basically, do his job, let us know what he needs. He said there was no issue with money. So we said, ‘OK, what about manpower?’ We said, ‘Bring in the National Guard, hire people that are unemployed,’ and he has still not done that. And we want to make it clear for the record, as well, that we are still collecting names [of unemployed people] up to this day, and putting them in a spreadsheet, and sending it over to the Department of Labor. And we’re still not getting a response. And so that’s something that we really want to make clear, that this is not something that our staff and us have neglected at all. We are continually doing that job.”

Schofield said, “There’s no way to track the number of people who have been impacted, and it’s not just losing the house or their car. It is the backlash on their credit that is going to negatively impact them for years to come. And so it’s trying to get stabilized housing, a job, things that you lost. And we appreciate all of the time that the staff at the Georgia Department of Labor have put in. We know they work diligently. But everything rises and the top falls on the leadership. And so, if you have a leadership that is not being transparent, and there are barriers to basic getting phone calls returned, e-mails answered, you have put people in a space where they are in survival mode. How do you measure survival? We don’t know that, and neither does the Georgia Department of Labor. So the fact that there’ve been excuses on top of excuses, whether they were valid or not, he has not done enough to protect the people. He has a system that the system should have been protected. It’s the largest employment system across this state. How do you have gaps and fraud and all of these things in the system? That’s his job. And so, the people are impacted by this. And we want to make sure we stand here always faint to put the people first, and we’re going to fight until everybody gets their resolve.”

Burnough added, “And a lot of these things are very simple things. Like we’re still getting people–I had a couple of people e-mail for their PIN. You know? Things that people, if you had–we asked for a call center. If I could just talk to somebody for 10 minutes, talk to them, they’d reset my PIN, then I could go on about my way. One guy, he was waiting on the [debit] card because the money’s in the bank, but he can’t use it, because he doesn’t have the debit card. And so, it’s little things like that that become frustrating, and those are things that could have been resolved early on. Those are things that did not have to happen. And I think that if he had resolved the little things that were going on, I think that the big things would have taken care fo themselves. People just want somebody to talk to. And they never did get that opportunity.”

“And they never got their unemployment,” Scott said. In Alabama and Tennessee, she said, states brought in college students and National Guard members to process COVID-19 unemployment claims. “This man was so stubborn,” she said. “Just his negligence. It’s pure negligence.”

Burnough said that she had personally given one constituent $600 and another $500 “just so that they could have their rent. I’m not saying this to brag about it, but I want people to understand that we’re doing this for the people. This doesn’t have anything to do with us. I know that he has met with the caucus, but he has never met with us,”

“And them for us [Georgia Assembly] to try and put bills up to protect the Georgia Department of Labor is really a travesty, in and of ourself,” Schofield said. “You’re gonna ask us to hire an additional staff member for him to be a liaison when he gets a paycheck. So this does not make sense when we cannot get the resolve we need, and we have to protect the citizens of Georgia.”

The bill went to House Second Reader status on March 10.

The legislators said that, after months of trying to work with Butler’s office, they contacted both Attorney General Chris Carr and Gov. Brian Kemp. They said neither man answered.

So, Davis said, they finally forwarded all the letters they’d sent to various parties to the Georgia Congressional Delegation, “to show them to what degree we had tried to resolve this problem.”

“We came with solutions,” Schofield said. “And I think that’s why we’re all frustrated, because we brought solutions. We just didn’t highlight a problem without bringing and offering solutions.”

“We’re not just being negative,” Burnough said. “We just want our people to have what they need.”

McLeod agreed. “A child living in a car is not an option.”

“We just want the constituents to know that we are here for them, and that we will continue to stand with them until they get some resolve,” Scott said. “And we thank our Congressional delegation for hearing our cries.”