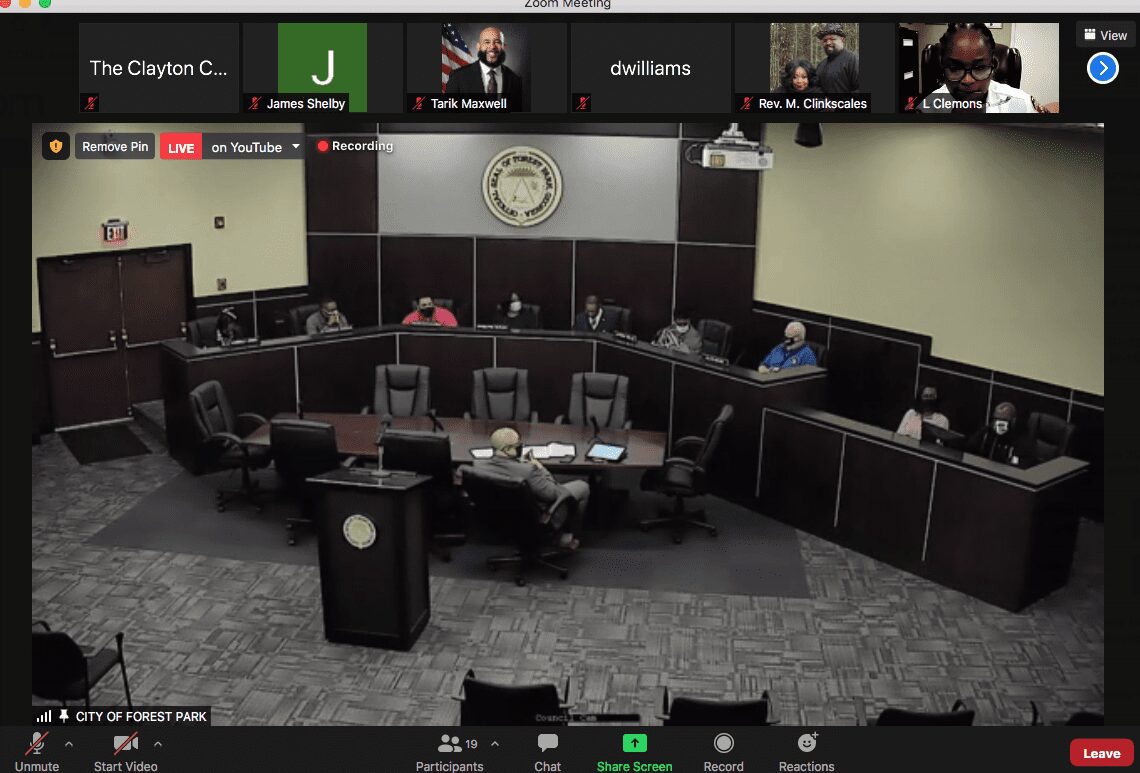 Public Safety Director Nathaniel Clark told the City Council the city is going to reopen on April 1. He referred councilmembers to a packet that he said they had received “probably one or two months ago.” If the city opens April 1, it would end more than a year of City Hall being sealed off from the public and the press.

The city also approved joint offers for two properties for MARTA’s $13 million Clayton County Multi-purpose Operations and Maintenance Facility at 5163 Old Dixie Road and 5265 Old Dixie Road. MARTA’s board authorized the deal at its March 11 meeting. According to MARTA, the facility will include:

The Old Dixie location is strategically located for MARTA’s efforts on the South OTP, providing backup for 31 bus routes, more than 250 buses, and 50 paratransit vehicles.

In January, Mayor Angelyne Butler extended the city’s emergency declaration “postponing all gatherings and special events of the City, including those initiated by members of the City Council,…until further notice unless full compliance with applicable public health COVID-19 guidelines and/or the Governor’s restrictions on gatherings can be assured.”

The news comes on the first day that COVID-19 vaccinations became widely available to Georgians. A check of the Clayton County Health District website before Monday’s council meeting revealed vaccines are available in Clayton County and that people are encouraged to call for an appointment.

During the work session, councilmembers touted their pet community events and Recreation Director Tarek Maxwell announced the city would host “the largest Easter egg hunt on the Southside.”

Councilmembers also talked about the Venue strip club on Frontage Road, which is owned by Red-Eyed, Inc., the same entity that wrestled a federal consent decree from the city. Red-Eyed, Inc. is owned by Teri Galardi, daughter of the late strip-club kingpin Jack Galardi, whose son Michael was targeted in a 2003 federal bribery sting involving San Diego City Council members in California and Clark County Commissioners in Nevada. The younger Galardi wanted elected officials to drop local laws that prevented customers from touching strippers. (\Michael Galardi pleaded guilty to a lesser charge and turned government’s witness in the bribery investigation. Jack Galardi, known for throwing huge parties at his Flovilla ranch in –where else?–Butts County, died in 2012.

In 2009, the City of Forest Park tried to keep the elder Galardi from allowing lap dances and selling alcohol. In 2010, the city passed a strip club moratorium. And in 2011, the city revoked the then-Pink Pony South and Crazy Horse Saloon clubs’ business licenses. Galardi sued the city for $70 million. In 2015, Red Eyed, Inc, David Rashmir’s Zillion Concepts, Inc., and the city reached a 15-year settlement that allowed the three bars–two with booze and strippers, one with food and alcohol but no strippers–to stay open until 3:30 a.m. Under the agreement, last call for the three clubs was 3 a.m.–an hour later than other establishments. The city could hold the owners liable if stripping crossed the line, and Galardi agreed to drop the suit and accept the ordinance.

Last week, the entity that owns Venue asked the city to change its DBA name “to King of Diamonds or something like that,” said City Attorney Mike Williams. The club had been behind on its fees and had asked the city if it could catch up. “We told city staff to stand down” while the city looked into the consent agreement with the other two adult entertainment clubs. As far as he knows, Williams said, the club paid all its fees current and is open for business.

Councilman Allan Mears said he had gotten calls from several people in his ward, and “did not know the whole situation. I want to make sure we’re where we’re supposed to be, we’re protected, no back-door surprises.”

Councilwoman Kimberly James said, “I just don’t wanna get involved in no controversies.” She added, “I understand it was a large sum of money that was paid in fees, they were behind. If they were behind, why are they not in default? It doesn’t make sense.”

Councilman Dabouze Antoine disagreed. “It makes sense….we have different people that want to do business in the city.” He said the city should not “give business owners a hard time. That’s what I think cities are supposed to do, to make businesses more friendly.”

Mears clarified his interest in the license. “Don’t misunderstand me. I’m all for business coming here….We want to make sure that Forest Park, we’re all stewards of this city, that we look after the best interests of Forest Park. When you have people in your ward who come to you with questions, it’s your responsibility to research and come back with the information.” He added, “It never was about ‘the club shouldn’t be there.’ I just want to be sure we’re all on the same page with the same information.”

The council went into executive session from 7:22 p.m. to 9:29 p.m. Butler said that Antoine and Councilwoman Latresa Akins-Wells let the executive session at 8:54 p.m. but did not say why. The meeting adjourned at 9:30 p.m.