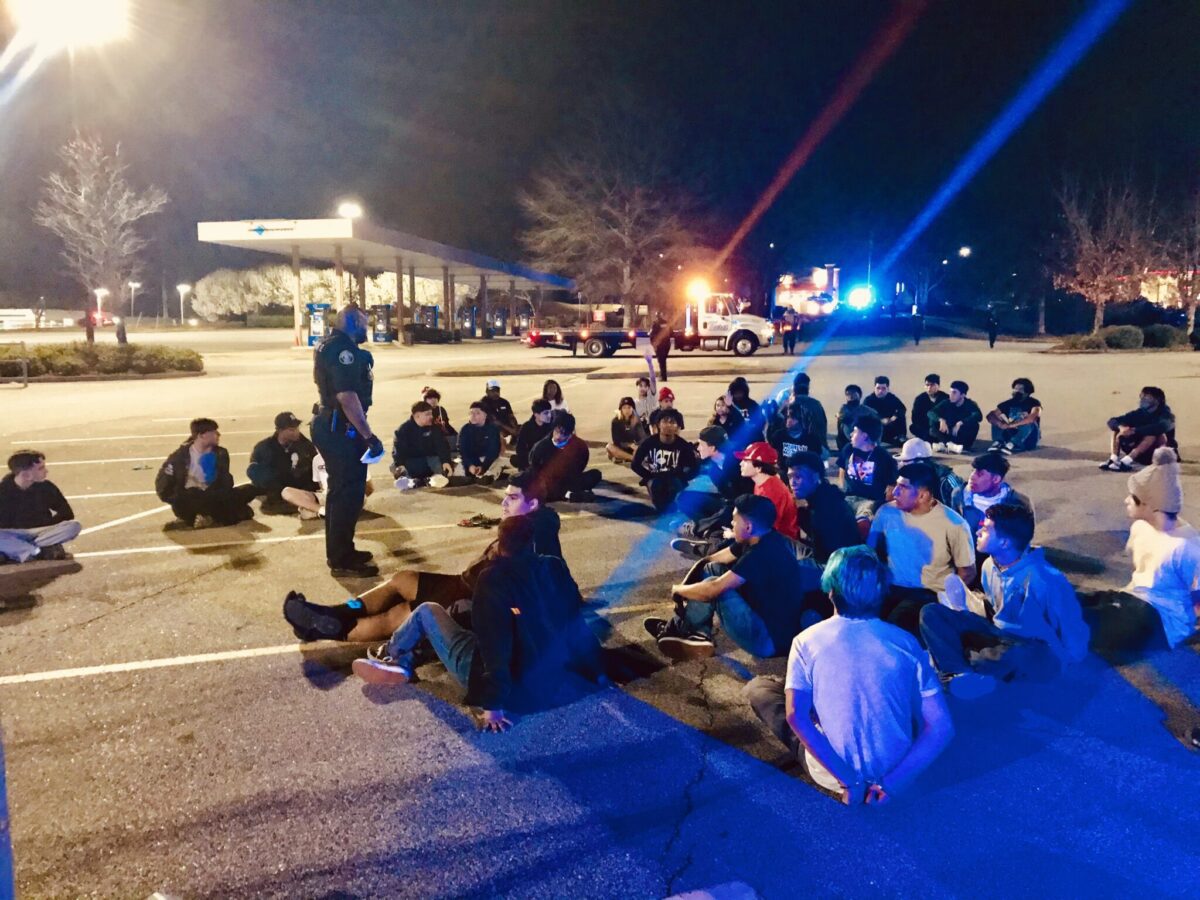 Clayton County Police Department Public Information Officer Aubriel Stroud released a video statement on Sunday afternoon, noting that CCPD was the “primary unit” in the bust. According to Stroud, 75 adults were arrested, ” with some being charged with possession of a firearm under 18.” In addition, 27 juveniles were arrested and their parents were charged with curfew violations, Stroud said.

48 vehicles were impounded and four firearms and less than an ounce of marijuana were seized:

CCSO had said it trapped the attendees by blocking the exits and laying down spike strips.

Most of the people arrested are not from Clayton County.

A source told The Clayton Crescent that CCSO had arrested nearly 50 teens for loitering or prowling overnight. According to Sheriff Victor Hill’s Nixle page, another 16 juveniles were arrested and their parents issued tickets when they came to get their kids.

Under county code, “loitering” means “remaining idle in essentially one location and shall include the concepts of spending time idly, loafing, walking about aimlessly, or sitting on cars, trucks or other vehicles, and also includes the colloquial expression ‘hanging around.'” whether on private or public property. Anyone disturbing the peace, blocking pedestrian or vehicle traffic, hanging out at times when people usually don’t hang out, “obstruct(ing), molest(ing), or interfer(ing) with any person (who is) lawfully in any public place,” or regrouping to hang out in a different spot after being told to move on can be fined $1,000 and sentenced to six months in the county jail.

Hill says a total of 88 people were arrested after the COBRA, Blackhawk, and Tactical Patrol Units “called Clayton County Police for back up and strategically block[ed] off every exit available for the racers and deployed spike strips to flatten their tires if they decided to run.  Once closing off all areas of escape, Deputies and Officers went from car to car and arrested all 88 of the street racing crew.”

CCPD said 75 adults and 27 juveniles were arrested, which puts the total at 102 people.

A check of Clayton County Jail records, which includes teenagers charged as adults, showed 44 people charged with loitering or prowling, most of whom have addresses outside of Clayton County and all of whom already had been granted $1,000 bond and $300 in fees:

The 14-day docket book appears to show others who were arrested at the Sam’s Club. We will update once we are able to clarify which other individuals charged as adults were present at the time.