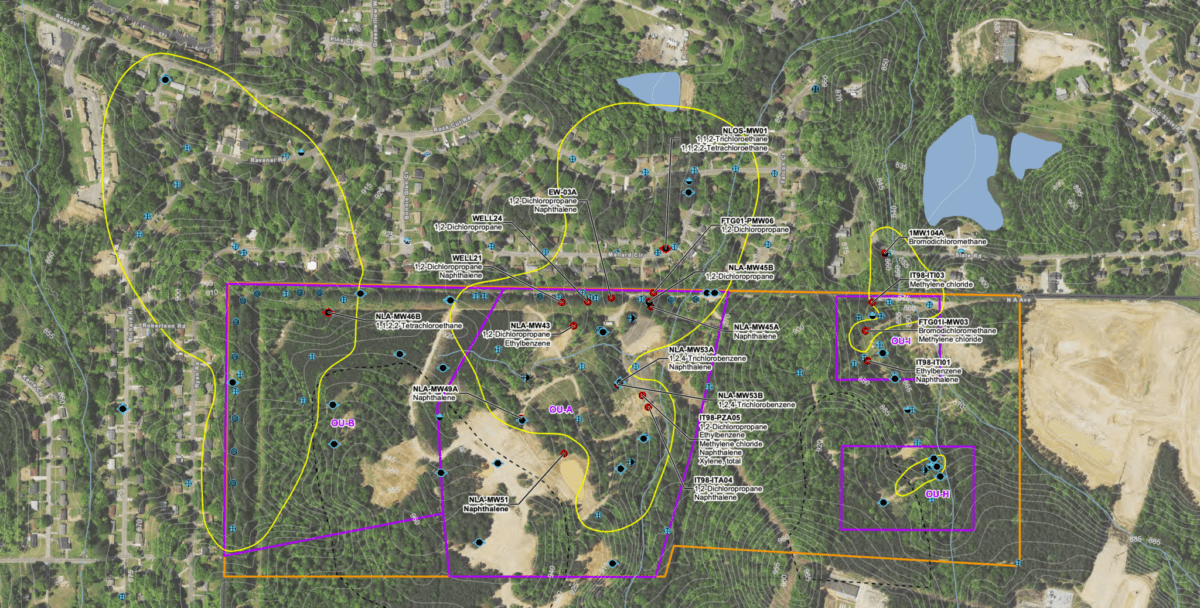 NOTE: This story contains the names of many organic chemicals and other contaminants. Where possible, we have linked the chemical or heavy metal’s name to a plain-language flyer or ATSDR site explaining what the chemical is and how it can affect people, animals, or the environment. Some TOXFAQ flyers are available in Spanish and Vietnamese.

The U.S. Army Corps of Engineers is giving the public until March 26 to comment on its proposal for cleaning up decades of toxic waste that has seeped off base from a landfill on the north side of old Fort Gillem into groundwater in Forest Park.

The notice asking members of the public to e-mail written comments between February 25 and March 26, 2021 was published in the Atlanta Journal-Constitution.

According to the draft plan prepared for the Corps by Aptim Federal Services, LLC of Knoxville, TN, the Army has three options:

In plain English, that means the Army would squirt a mix of vegetable oil, microbes that eat pollution, a food source like molasses to feed the microbes, and a”buffer” into underground water that flows from the old dump on the north side to the neighborhoods on the other side of the fence.

Here’s how it works: the mixture is injected across the underground water current. The microbes then attack volatile organic chemicals, or VOCs for short, breaking them down into “innocuous end products.”

Because the levels of contamination are so high, the report says, “a CERCLA §121(c) review will be conducted every five years until the site contamination reaches concentrations that are safe for Unlimited Use and Unrestricted Exposure.” The EPA’s use of the terms “unlimited use” and “unrestricted exposure” are “aspirational”–meaning they’re something to shoot for but not likely attainable.

CERCLA, which stands for Comprehensive Environmental Response, Compensation, and Liability Act, is better known as Superfund. Congress passed the law in 1980, which put a five-year tax on oil and chemical companies. $1.6 billion went into a trust fund, which the government uses to clean up “abandoned or uncontrolled hazardous waste sites.”

Despite the massive amount of contamination, the FTG-01 site is not designated as a Superfund site.

In 1979, according to the EPA, the Army had documented “that soil, sediment, surface water, and groundwater have been impacted by buried material” in the FTG-01 North Landfill Area. “Four dissolved-phase groundwater plumes are associated with the [landfill area], three of which have migrated off the former Fort Gillem property into adjacent residential areas.” In addition, the EPA wrote, Conley Creek, Eastern Stream, and Western Stream “contain site-related contaminants, including volatile organic compounds,” that run through the local neighborhoods.

In 1992, according to the EPA, “trichloroethene (TCE) and other contaminants,” including “related volatile organic compounds” were found in neighborhood groundwater.

In 1994, Georgia Environmental Protection Division listed the known groundwater contaminants at the North Landfill Area. It included every regulated substance on the list. In addition, the soil was found to have lead, arsenic, chloroform, and trichloroethane:

The Army found contamination in private wells outside the base and paid for the people who owned those wells to connect to the county’s water pipes. It also handed out bottled water to Forest Park residents. According to the EPA, levels of trichloroethene, tetrachloroethene, and 1,1,2,2-tetrachloroethane in groundwater plumes outside old Fort Gillem were documented as being “above health-based standards.”

In 2011, “the Army and Georgia EPD discovered a private well in use [on Slate Road], approximately 300 feet north of the Facility boundary,” that was contaminated with trichloroethene and cis-1,2-dichlorochloroethene. The Army paid to hook up that location to county water.

In fiscal year 2012 (in a report printed in 2013), the Gillem Enclave Army Defense Environmental Restoration Program Installation Action Plan noted, “The community has expressed no sufficient, sustained interest in an RAB (Restoration Advisory Board).”

In 2014, the Army did an air study “outside of the former Fort Gillem boundary in areas of known or suspected groundwater contamination. Soil gases collected in August 2014 in residential areas beyond the north boundary of the Site show elevated level of several contaminants….consistent with the contaminants or class of contaminants found on the Fort Gillem property, in various environmental media, during previous investigations of Fort Gillem.”

17 homes were studied. According to the EPA:

When will it be “clean?”

The proposed cleanup process is not a quick fix. The report estimates it would take 15 years–until 2036–to get the site clean enough for commercial or industrial uses. When the Army eventually sells the site to the City of Forest Park through the city’s redevelopment agency, “restrictions prohibiting residential use and groundwater use will be included in the deed transferring the Site.”

However, that 15-year number is not hard and fast. It could take longer if new areas of contamination are discovered. It also could depend on how much contamination is in the water and how quickly the microbes eat them.

And if new regulations or laws are passed about how such sites should be handled, that could lengthen (or shorten) the time that the Army is required to clean up the site. If legislation were to pass that, for example, raised existing safety limits, the cleanup could end sooner but be less effective. Conversely, a law that lowered acceptable limits could require more of the contamination to be cleaned up, but would require a longer treatment and monitoring period. In any case, experts say, some degree of pollution is likely to be there forever.

The question is whether the people who live next to the base will take part in the public comment process and let Army and Georgia EPD officials know what their needs and concerns are. Residents do not need to go through local government to take part in the process. While appointed and elected city officials in Forest Park have a major financial interest in transforming Gillem into a new revenue source for the city, they also have a duty to protect their citizens from harm, at least to the extent possible in a neighborhood that may never truly be non-toxic.

Conley has no city government and is in Clayton County; East Conley is in Dekalb County and has a large, active neighborhood association. Similarly, Ellenwood is unincorporated and stretches across Clayton, DeKalb, and Henry Counties. Since the COVID-19 pandemic began, Forest Park has seen its formerly active public participation in council meetings drop to zero or near-zero online since it declared City Hall closed to the public. These situations can make it hard for less-engaged citizens to figure out how to seek help from their local government.

If you want to tell the U.S. Army Corps of Engineers what you think about the proposed cleanup effort, you will need to write it down and send it as an e-mail no later than Friday, March 26 to:

To learn more about how Georgia EPD is involved in the effort, you can contact:

You also can follow the Fort Gillem Remediation Facebook page, which posted a link to the draft report on February 24 and mentioned the March 26 public comment deadline:

The Tulane Environmental Law Clinic‘s Guide to Environmental Protection in Louisiana offers sample outlines for written and verbal comments, as well as these tips for writing your letter:

Do you live near Fort Gillem? Have you experienced any issues with contaminated water, air, or soil coming from Fort Gillem? We’d like to hear from you. E-mail KempWrites@gmail.com or call (404) 547-1171.