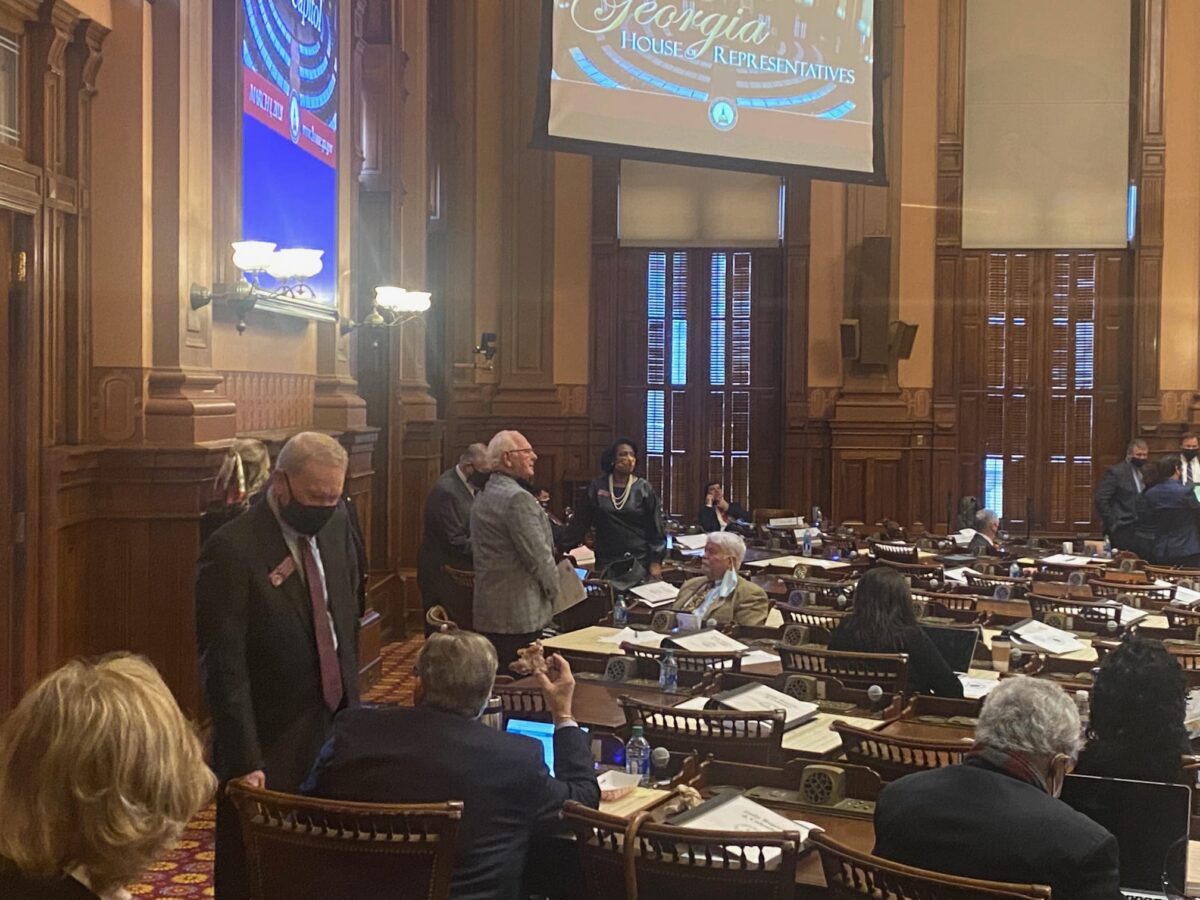 The Georgia House of Representatives voted 97-72 to pass an omnibus bill that critics say would turn Georgia voting access back to the days of Jim Crow.

The bill now goes to the Georgia Senate and likely will come back before the House before final passage for Gov. Brian Kemp’s signature or veto.

Demonstrators showed up outside the Gold Dome at 5:31 a.m., a reference to the bill’s number. They also protested a Georgia State Trooper’s putting his hands on Rep. Park Cannon as she stood on the steps leading up to the House gallery on Feb. 26.

After the vote, House Democrats packed the staircase for a press conference as their Republican counterparts walked down one side of the stairs to a meeting with Secretary of State Brian Raffensperger. The Democrats say that they have not heard one word from Raffensperger, a Republican, about any of the voting legislation this session.

As members of the Georgia Assembly prepared to vote on key bills that critics say will limit access to voting, about two dozen protestors stood outside in the early morning drizzle vowing to stand up and fight back.

Outside, Clayton County resident Alvin Farmer and others opposed to House Bill 531 and Senate Bill 241 listened as Democratic legislators addressed the protestors.

Alaina Reeves, delegate to the Democratic National Convention, decried the restrictions HB 531 would impose on voters of color, while Rep. Sandra Scott(D-76, Rex) said her Republican colleagues were “scared shitless” because they’ve had a Black president and now have a Black woman as vice-president:

The two omnibus bills, one in the House and one in the Senate, contain a raft of provisions that would remove absentee ballot drop boxes, shorten the time to request absentee ballots, require voters to submit photocopies of their ID with their absentee ballot requests, and ban elections superintendents and boards of registrars from receiving private grant money to defray elections costs, among other changes.

“It’s a good day to be a soldier!” Scott shouted as she and Schofield entered the Capitol building Monday morning.

Rep. Angelika Kausche (D-50, Johns Creek) told demonstrators that she came from West Germany and warned that Georgia should not go down the road of making elections more difficult.

The House reconvened at 12:45 p.m. and took up HB 531. Rep. Barry Fleming (R-121, Harlem), who chairs the Special Committee on Election Integrity, is taking questions from the well. He says the bill would not prevent local elections superintendents from receiving grants and that it also would not prevent “line-warmers” from handing out food and drink, as long as they do it outside the 150-foot electioneering boundary. However, line 1277 prohibits handing out food and drink “(W)ithin 25 feet of any voter standing in line to vote at any polling place.” If the line were to extend more than 150 feet from the polling place, this wording would appear to prohibit anyone in line from receiving food or drink.

House Speaker David Ralston gave each side one hour to debate. Some highlights:

Burnough took the well to call out the special committee for stifling debate on elections. She rattled off a long list of counties that received private grants for elections. She finished with a promise: “Ain’t gonna let nobody turn us around.”

In the hallway, she told The Clayton Crescent, “I’m sure they’ll transmit it very quickly over to the Senate.” She added that voters should “continue to call and express their views” because “now we’re going to start to get those Senate bills, and the Senate bills are horrible. They’re worse than this one is and so they (voters) still have to keep that pressure on. They do not let it go to sine die.”

Sine die is the last day for a bill to pass both the House and Senate if it is going to make it to the governor’s desk this session. Gov. Kemp then has 40 days to sign the bill into law, to let it take effect without his signature, or to veto it. A bill that doesn’t make it out of the General Assembly can always come back next session.