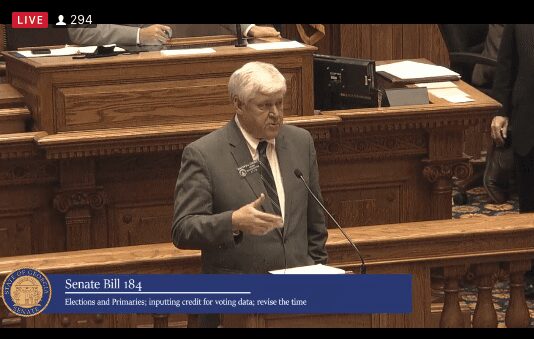 The Georgia Senate has passed several bills that, if agreed to by the House and signed by Gov. Brian Kemp, would change the way Georgia voters cast their ballots, as well as the way in which elections officials would report the number of votes cast.

The bills run largely along partisan and racial lines, with Democrats and Black legislators calling the Republican-led effort in both sides of the Georgia Assembly voter suppression and a return to Jim Crow. Republicans in the Senate say they are trying to provide greater transparency and accountability in the voting process. GPB and Georgia News Lab report that several of those Republican senators backed false claims about voter fraud and/or backed efforts to overturn the results of the November 2020 Presidential election.

Watch the full floor discussion from Wednesday, February 23, during which each bill’s author answers questions from colleagues about the bills:

Compare the version that passed with the original version (they appear identical except that the substitute bill removes the original sponsors’ names and has a different tracking number). SB 40 would require elections officials to start opening and tabulating absentee ballots the second Monday before a primary, election, or runoff.

SB 67 would require voters who apply for an absentee ballot (except overseas and military absentee voters) to submit with their application:

Acceptable forms of documentation are listed on the Department of Driver Services website.

The bill also requires first-time Georgia voters who register by mail to include a legible photocopy of one form of ID. Advance in-person voters will need to show their ID to poll workers.

Language allowing a witness to sign for voters who cannot fill out or sign their own application due to “illiteracy or physical disability” was stricken from the final version of the bill.

The bill also dropped language that would have:

The bill also reads, “If the registrar or absentee ballot clerk is unable to determine the identity of the elector from information given on the application, the registrar or absentee ballot clerk should promptly write to request additional information.” It does not mention to whom the clerk shoukd write, nor does it specify how the written request is to be sent nor within what timeframe.

U.S. citizens who are permanent residents of another country, but whose last address was in Georgia, would have the right to apply for, and vote by, absentee ballots in any election for presidential electors, U.S. House, or U.S. Senate.

The original bill passed without changes, 37-15.

The bill requires the Secretary of State to “ensure that all information required by this subsection is readily available on a publicly accessible website, including totals.”

For a quick explanation of how a bill makes its way through the Georgia Assembly to become law, visit the New Georgia Encyclopedia’s Legislative Process Overview.