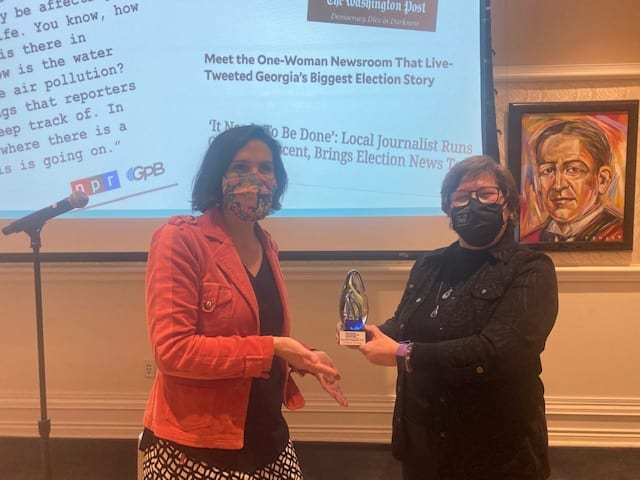 Robin Kemp, CEO and executive editor of The Clayton Crescent, Inc., has been named the Mercer University Center for Collaborative Journalism‘s 2021 Media Changemaker.

Kemp was recognized in a ceremony at Mercer on February 6 for “her efforts to address information gaps in Clayton County, Georgia. After the local newspaper reduced its resources to the point that local government wasn’t even being covered, Robin used a modest GoFundMe to start The Clayton Crescent. She made national headlines in November when she stayed at the local Board of Elections throughout the night as absentee ballots in the Presidential race were being counted. Kemp exemplifies the fight against growing news deserts and the importance of local information in the larger democracy.”

Each year, the Center for Collaborative Journalism recognizes a media maker who is making contributions to changing the way media is consumed or understood or who is looking at civic solutions via information access.

Speaking to incoming journalism students at the Changemaker Scholarships, Kemp said, “When you have a county like Clayton County that is made up of seven municipalities, multiply everything by eight. Because you have not only all of the city councils and the county commission, you have all the police departments, you have the county police department, you have the county sheriff’s office, you have–I think it’s 24 or 25 county boards?–you have all the boards at each city, there’s no way one person can do it. So I have to pick and choose my battles. The most important thing for me is to tell people what’s going to happen, not what happened last week.”

She credits her father, retired journalist Jim Kemp, for teaching her about journalism.

“I grew up in the news business, so I was very fortunate in that regard,” Kemp said. “I had the benefit of growing up in that environment from Day One.”

Kemp urged the students to “think about using the tools you have on hand to get the story told” as opposed to worrying about having the newest and fanciest equipment.

She also called on the students to take seriously their role as “guardians of democracy.”

“We need you to innovate and to go out there and create new things, like this,” Kemp said. “We need real trained journalists to do this. Because without it, we don’t have a democracy. If y’all are not the guardians of democracy, folks who get into office will do whatever they please. And they do. So while you’re thinking about coming into journalism, please think about the importance of the mission. You are the guardians of democracy. And it may be something as simple as [coverage of] counting the votes at the county. It really does matter.”

Previous recipients of the Media Changemaker Award include:

Kemp is the founder, chief executive officer, executive editor, and sole employee of The Clayton Crescent, a nonprofit news website serving Clayton County and the Southern Crescent. Kemp holds a B.A. in English from Georgia State University and a Master of Fine Arts in Drama and Communications from the University of New Orleans, and is ABD in English and Creative Writing at Georgia State. She has worked as a journalist for Gambit, nola.com, Cable News Network, The Weather Channel, The Clayton News, The Henry Herald, and numerous local, state, and national publications. She has attended the Poynter Institute twice and won various awards for her journalism and her poetry.

You can support The Clayton Crescent’s mission by donating to its GoFundMe page. The Clayton Crescent, Inc. is registered as a nonprofit corporation with the State of Georgia and is awaiting its 501(c)(3) determination from the Internal Revenue Service.