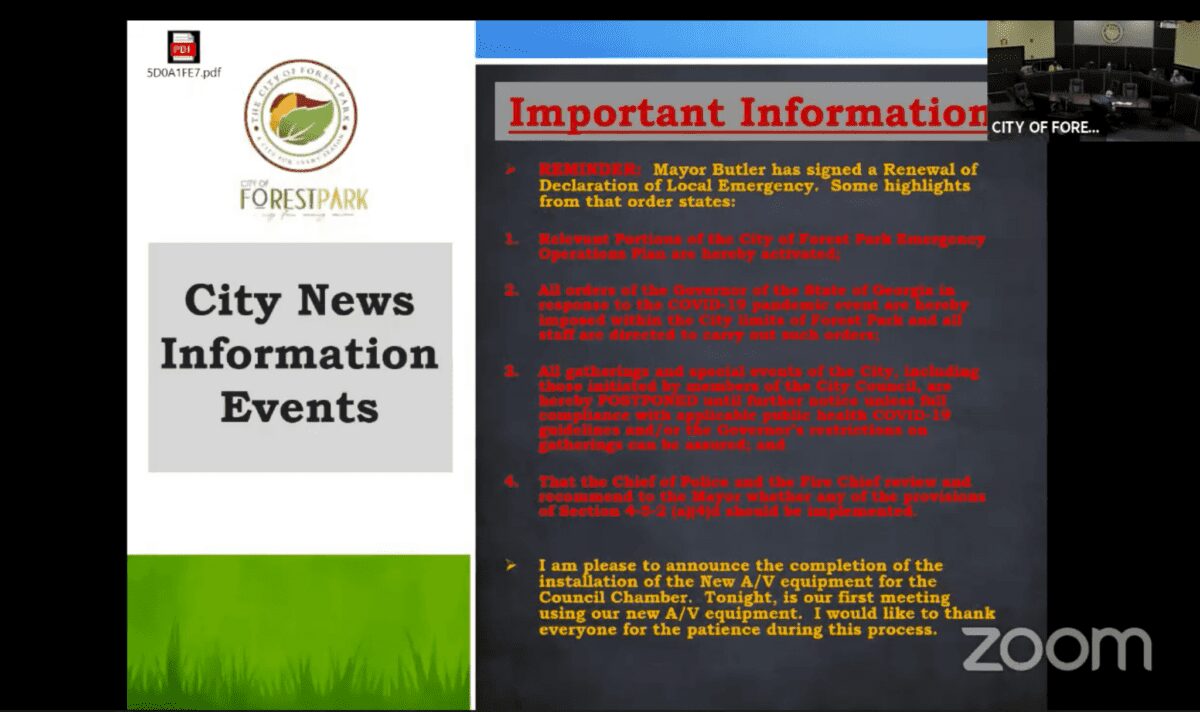 The City of Forest Park has suspended city-sponsored public gatherings, including events sponsored by councilmembers like Food Truck Fridays and various festivals in Starr Park.

City Manager Shalonda Brown made the announcement during the 6:30 p.m. work session.

Watch the meeting live at https://www.youtube.com/watch?v=Tco-V3vFWNg.

Ever since the first COVID-19 emergency declaration nearly one year ago, the city has held numerous public events where masking and social distancing were not strictly enforced. The city reportedly has been working on a pandemic plan “for several months now.” Mayor Angelyne Butler issued a new declaration on January 8. At that time, Butler suspended

Some changes citizens can expect at a reopened City Hall, according to the Fire Department, which developed a reopening plan, include:

This is the first meeting using the city’s new audiovisual conferencing system. Audio quality has been good so far. Viewers can see the full dais from the point of view of an audience member. Chamber video is fairly low-resolution, while video streaming from the Fire Department is clear. Lighting is poor and does not separate all councilmembers from the background. The chat function appeared to be on but returned an error message when tested.

The City Council, along with the city’s appointed boards, voted to update the audiovisual setup in council chambers following protracted negotiations between The Clayton Crescent’s legal advisors at the University of Georgia Law First Amendment Clinic and city officials.

The Clayton Crescent has advocated for the public to be able to see and hear, clearly, the proceedings of the elected body since the council went to teleconferences only during the pandemic.

Meeting audio was so bad in August 2020 that The Clayton Crescent attempted to cover the meeting in person on three separate occasions and was barred from doing so by Forest Park Police at the direction of Mayor Butler. The Georgia Open Meetings Act mandates that the press and public be allowed to attend all public meetings of elected bodies.

The city claimed that the COVID-19 declaration took precedence and that having a reporter in chambers would put city staff at risk. However, city officials, including Butler, Brown, and Councilman Dabouze Antoine, continue to go maskless or “chin-masked” while in chambers.

Gutierrez, who recently was hospitalized with COVID-19, has been one of the most enthusiastic advocates of city-sponsored events. He is now masking in chambers.

At the start of the regular meeting, Butler’s mic seemed to go out. City Attorney Mike Williams handed her his mic. The invocation via Zoom was fully audible.

No public comments were submitted. City officials did not acknowledge The Clayton Crescent’s questions in the YouTube comments section, specifically:

It is customary for journalists to chat with elected officials before and after called meetings and during any breaks. However, there is no real equivalent for those interactions in a teleconference.

Butler said that, going forward, public comments will be done using a form “and you will be able to say your public comments online.” She referred residents to the city website and said the new public comment method would be in place for the next council meeting, which is scheduled for February 15.

The council then went into executive session at 7:15 p.m.