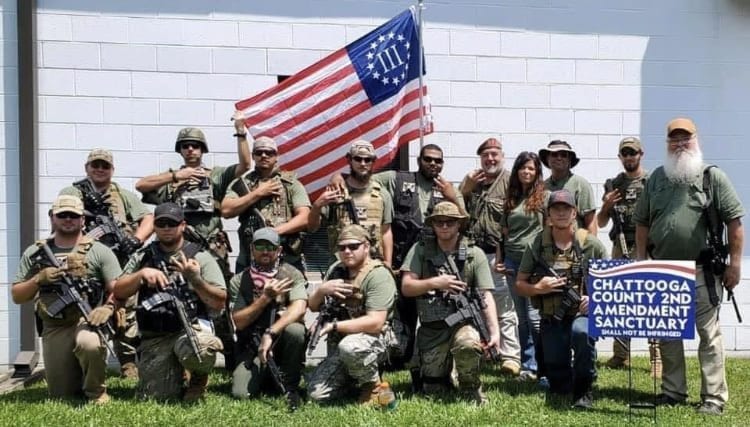 Justin “Slayer” Thayer, the leader of the Georgia III% Militia who said he did not give four former members permission to surveil a Black Lives Matter march in Morrow last summer, tells The Clayton Crescent that he is on the way to Washington, D.C. on the eve of President-elect Joe Biden’s inaugural.

Naveed Jamali, who says he is a former double agent against Russia and who is editor-at-large for Newsweek, tweeted Tuesday night that he also had spoken with the Georgia III% Martyrs and had a story forthcoming. Thayer and Jamali both confirmed to The Clayton Crescent that the conversation had taken place.

Story coming shortly: III%er leader tells me he is caravanning to Capitol as we speak. Story shortly. pic.twitter.com/DSZNsnXq5V

Thayer told The Clayton Crescent that he and others were present at the January 6 attack on the U.S. Capitol. However, he said, “We did not go into the Capitol. Could of easily turned into a kill box. We advised everyone we could not to go in,” adding that it “was obvious it was antifa a lot of them were screamin antifa as they entered and if real patriots entered they wouldn’t of just gone in and took selfies etc they would have gone after pelosi etc.”

Thayer pointed to a YouTube video, “Trump Supporters Yell ‘Stop Antifa!’ As Protestors Break Capitol Building Windows. The video cannot be embedded here and carries a disclaimer from YouTube stating “The Electoral College has confirmed Joe Biden as president-elect.” In the video, someone wearing black can be seen in the background striking a window while a woman’s voice off camera shouts “No Antifa!”

On December 13, Thayer sent a declaration to The Clayton Crescent that the 2020 election was fraudulent and that he was ready to follow former National Security Advisor Michael Flynn into battle on behalf of President Donald Trump. Numerous court challenges in Georgia did not substantiate claims of widespread election fraud. The Clayton Crescent heard Republican election observers make such claims on Election Night; when asked to describe specifically what they allegedly had seen, all observers declined to comment.

Here is the declaration Thayer sent:

The 2020 presidential election has undoubtedly unveiled that there was widespread election fraud perpetrated against the American people. I share the anger and sorrow of the American people and the desire for justice to be brought against anyone involved. I am certainly engaged in this fight for election integrity, for without secure elections we have no voice as a people, and our country ceases to exist at that point. This blatant assault on our freedoms has awakened a sleeping giant that has been far too long in slumber.

I stand fully behind President Trump, our patriotic generals and military leaders (such as General Flynn and Lt. Col. Allen West), our constitutional conservative senators and representatives (such as Ted Cruz), and those lawyers who are fighting tooth and nail for our freedoms (such as Lin Wood, Sidney Powell, and Rudy Giuliani). I stand by to answer the call from our President should the need arise that We The People are needed to take back our country from the pure evil that is conspiring to steal our country away from the American people. I am ready to enter into battle with General Flynn leading the charge. I will not act unless I am told to. And I will not act on my own but rather as a united body of American patriots.

It is my hope and prayer the states that have had sufficient evidence of election fraud make a stand by doing what is just: by having their electors cast their vote for Donald Trump. If they fail to do this I urge Vice President Pence to refuse the electoral count in order to enable a contingent election, for House GOP members to object on the floor for the electors being untrue, or for President Trump to use the military to enforce 2018 Executive Order 13848 and to commence military tribunals for those who staged a coup of a sitting US president. Should all of these avenues of approach fail, and in order to prevent a second civil war. I urge all conservative states to join together to secede from the Union in order to form a more perfect Union so that our values of freedom, liberty, and our American way of life may be preserved. United we stand, divided we fall, and we are clearly no longer unified as a nation.

The most important thing we can do right now, as citizens is fully support President Trump in his fight to preserve the integrity of our elections by way of donations, petitions, rallies, recalls, contacting, etc. I ask those who are religious to offer up sincere prayer and ask God to give our leaders strength, for our judicial branch to make constitutional rulings, and for the future of our nation to be preserved for the benefit of our children and grandchildren.

Now is the time we must come together as honest, law-abiding citizens and demand free and fair elections. We must never accept fraud, regardless of the outcome. God bless America! And may God bless The Three Percenters!

The Clayton Crescent asked Thayer whether he planned to take any action to stop the inauguration. “No,” he replied, “just be there in case something happens and we are needed.”

Members of the Three Percent movement believe only three percent of Americans took up arms against the British during the Revolutionary War. They advocate the right to bear arms, specifically to overthrow the government in case of what the group perceives as overrreach of Constitutional powers.