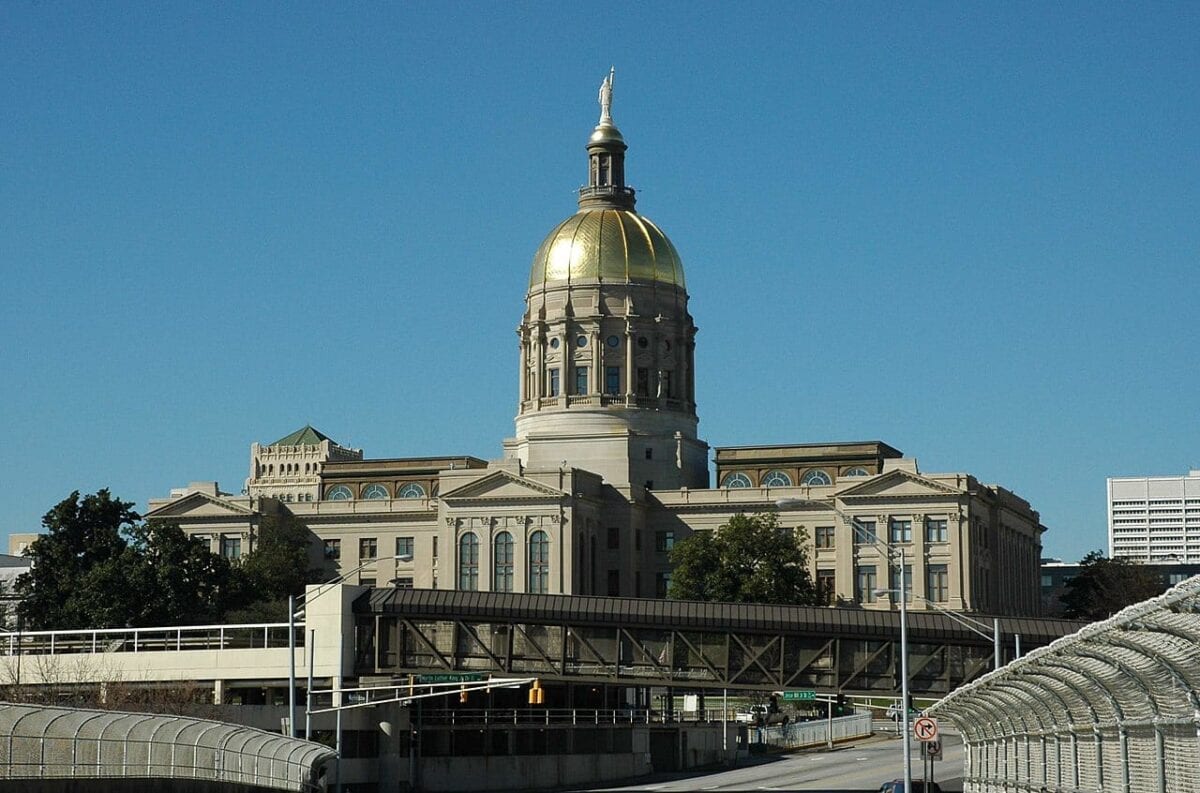 Here’s a look at bills that Clayton County elected officials prefiled with the Georgia House of Representatives as of Day One of the new legislative session.We’ve included the substantive parts of each title and skipped wording like “and related matters” or “and for other purposes.”

You can see the official description and read each bill. Just click on the highlighted bill number below, then click on the dark blue “Current Version” button on the bill’s page on the Georgia General Assembly website.

To contact your elected official about a bill, resolution, or other matter, click his or her name and you’ll be taken to that representative’s or senator’s contact page on the Georgia General Assembly website.

Please consider sharing this information with friends and neighbors who may be less tech-savvy.

“I will continue to file those bills because I think they are needed,” Scott said of the bills that she has filed in previous sessions. The police and medical examiner/coroner oversight bills were filed last session after Ahmaud Arbery was killed, she said. “They must stop that. It goes back to the Kendrick Johnson case….that is a bill that is much needed to hold them responsible when they knowingly give false information about a loved one.”

As for elections, “We’re going to fight tooth and nail against all of these voting things that they’re coming up with.” She says the ballot boxes were a safety issue during COVID-19. “It’s all about race, it’s all about stopping black people from voting, That is the bottom line, It’s nothing more than that. It’s a racist assault on Black people and their right to vote,” she said. “The only time (election laws) are a problem is when Donald Trump lost and all these Black people came out to vote?….We’re gonna fight like hell.” She said the House Speaker is pushing a bill to appoint the Secretary of State, “The people need to choose the Secretary of State,” she said. “You want to appoint the Secretary of State so you can control him, so you can call him up and say ‘We need to find these votes.’ It’s crazy.”

Scott, a Democrat, said the Republicans want to “change elections and laws because they lost” and that they want one-party rule. “They want to deprive Black people of the right to vote in the state of Georgia and that is really sad in the 21st century that they would try to bring back the laws of Jim Crow.”

She added that the 911 bill “should be able to move pretty easily, hopefully,” as well as the bill about how to weigh poverty. “This bill would definitely give a big, big plus if we look at funding students based on poverty versus QBE,” she said. “The school system would get much more money and be able to do some of the things they need to do.”

HB9 “would be a big help to the school system if they were able to provide Telehealth.”

Scott said legislators “are still working out some of the kinks” on the community review board bill, HB 35, which she hopes will bring together police and the community to shut down bad actors in law enforcement. “Clayton County has given us their input on the bill from the DA and police officers, so we’re going back and tweaking it,” she said. Board members would need training and would serve two- or three-year terms, with a lot of training during the first year. “What we had put forth was a $500,000 insurance policy, and what Clayton County brought to our attention was that they (officers) couldn’t afford it,” she said. “So we have to go back and look at things like that in this bill to get it to where it needs to be. But a lot of the chiefs said they could work with it, it’s doable, if we come to terms on some things.” She’s hoping to update the bill by the end of next week so that it can be ready when the House returns to session in February.

HB 5: This bill would create one or more lottery games, the proceeds of which would go to homeless military veterans‘ programs. It also calls for the money to be deposited into the state General Fund, as well as for a separate appropriations account for those funds.

HB 6: This bill would create an income tax credit for investors in women-owned businesses.

HB 7: This bill would pay in-state tuition at state universities and technical colleges for students who are homeless or in foster care, as well as exclude foster care assistance from financial aid income calculations.

HB 8: This bill would require colleges and universities to set aside a portion of its revenues from postseason athletic competitions “to be distributed to eligible student athletes on a pro rata basis upon graduation.” The funds would be held in an escrow account.

HB 9: This bill would define the term “telehealth” and have the Department of Education and Department, “in consultation with the Department of Behavioral Health and Developmental Disabilities and others,” create guidelines for public schools to offer mental and behavioral telehealth services at school or during school functions.

HB 10: This bill would require the State Board of Education to make local schools use a minimum portion of grant money to directly benefit students living in poverty. The bill has to do with program weights and funding requirements of the Quality Basic Education Act.

HB 11 would set limits on the number of patients assigned to nurses in various areas of hospitals and other health care facilities. See the bill for details.

HB 12 would change existing marijuana possession law, raising the amount of pot in misdemeanor possession to two ounces instead of one. It also would impose a $300 fine instead of the existing $1,000 fine, and get rid of 12 months’ possible jail time or public works service sentences.

HB 14 would create a special license plate for spouses of military veterans.

HB 15 would require training in specific de-escalation techniques for all law enforcement officers as of 2022.

HB 17 would ban law enforcement agencies from engaging in profiling based on race, sexual orientation, or similar characteristics and allow anyone who alleges they have been profiled to file civil suit in Superior Court.

HB 18 would require all peace officers to provide identifying cards with their contact information when making contact with subjects, to wear and activate body cameras, and for those body camera recordings to be made publicly available. All law enforcement agencies would have to provide officers with body-worn cameras by July 2024. See the bill for details.

HB 19 would toughen rules of evidence by which the state can claim civil forfeiture of an item–for example, a car seized during a drug raid. Prosecutors would have to show “clear and convincing evidence” rather than “a preponderance of the evidence” that such items were acquired directly as a result of the crimes in question.

HB 20 would give survivors of anyone killed by a police officer the right to sue coroners or medical examiners for negligence in a death investigation, “including, but not limited to, falsifying or mischaracterizing the cause of death.”

HB 21 would make it illegal to call 911 based on a person’s race, color, sexual orientation, gender, national origin, religion, or disability.

HB 22 would require housing authorities to develop and put into practice policies to give homeless veterans priority for housing aid.

HB 35 would institute citizen review boards to investigate complaints about alleged police misconduct, as well as require each officer to carry $500,000 in liability insurance as a condition of employment, require departments to track complaints against officers, and remove police immunity from lawsuits for alleged misconduct or violations of the law.

HB 57 would require prisons to provide sanitary breast pumps and breast milk storage for inmates who have given birth, for at least six months or the length of the postpartum period.

HR 1 seeks a proposed ballot amendment that would let voters decide whether Georgia Lottery proceeds should be set aside for homeless veterans.

HR 2 seeks a proposed ballot amendment that would let voters decide whether an elected official’s position should be declared vacant as soon as that official qualifies to run for another elected office.

HB 31 would waive Open Records fees for state legislators and other state executives who provide a letter stating they are seeking the records as part of their official duties, including constituent services.

HB 37 would require every public school in Georgia to have a wheelchair on site as of the 2022-2023 school year, in case any student, teacher, or staff member is injured, sick, or temporarily incapacitated. The wheelchair can be electric or self-propelled.

HB 38 would allow court-appointed expert witnesses to testify in cases about sterilization. The move comes after reports that women being held in the Irwin Detention Center underwent forced sterilizations.

HB 39 would force insurance companies that issue short-term policies to state that those policies do not include all benefits under the Affordable Health Care Act. Those policies would last no more than 181 days. See the bill for details.

HB 40 would prevent the sale of clothes and furniture that contain certain flame retardants which have been show to cause cancer, harm fetuses, or damage the endocrine or nervous systems. See the bill for details and for the names of specific chemicals.

HB 41 would require insurers to treat certain out-of-network care as if it were in-network. See the bill for details.

HB 42 would grant physicians who agree to practice medicine in underserved area of Georgia $25,000 per year for up to four years.

HB 58 would give women who have been arrested the right to deny pregnancy testing, have sentences deferred until 12 weeks after delivery (with more time for pregnancies with complications), and require corrections facilities to collect and report non-identifying data on pregnant women in custody to the Georgia Department of Public Health as of January 1, 2022. Women whose sentences have been deferred will also be given health education and other support resources.

HB 50 would create a special license plate benefitting the Georgia Center for Oncology Research and Education (Georgia CORE), a nonprofit cancer research foundation based in Atlanta.

HB 52 would prevent people convicted of felony domestic violence from possessing or carrying firearms and provides prison sentences for violators. People convicted of or on probation for family violence which did not involve injury or a forcible felony, who are first offenders, or who are under conditional discharge would face lesser sentences of one to five years; those who were convicted of forcible felonies could face up to ten years. Notably, this includes “arson in the first degree; the manufacturing, transporting, distribution, or  possession of explosives with intent to kill, injure, or intimidate individuals or destroy a  public building; terroristic threats; or acts of treason or insurrection.” See the text of the bill for details.

HB 54 would require sex education and AIDS prevention courses to teach “best practices for and risks associated with” tampon use. It also would “encourage” doctors and nurses “to recite and provide certain written information” about tampons to their patients.

Clayton seniors 65+ can now sign up for COVID-19 shot