Shortage of wreaths for veterans’ graves this Christmas 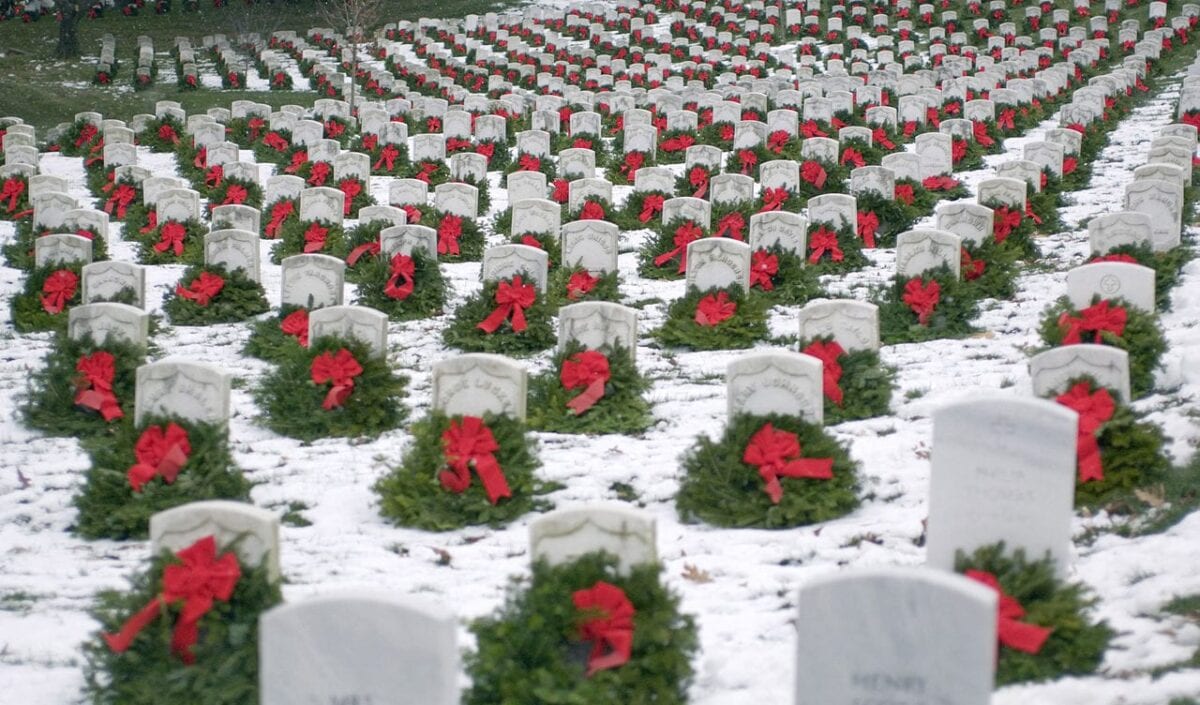 Local veterans’ groups say they have had difficulty getting enough wreaths for each veteran buried in area cemeteries this year.

Master Sergeant (Ret.) Patricia Baisden, a Bronze Star recipient who served in Afghanistan and who runs the nonprofit Southern Crescent Veterans Services, Inc., said her organization was unable to raise enough money for an estimated 10,000 veterans’ graves at historic South-View Cemetery. The ceremony was to have taken place on December 18, Baisden said.

The annual event, which was slated to take place at over 2,000 cemeteries in the U.S. and abroad on December 19, was on-again, off-again as Wreaths Across America officials debated how to handle COVID-19 restrictions. Even President Donald Trump got in on the act, tweeting that he had “reversed the ridiculous decision” after Secretary of the Army Ryan McCarthy directed Arlington National Cemetery to proceed while taking precautions.

However, other local and national cemeteries had a range of experiences. Some volunteers placed wreaths while families watched on social media feeds. Other veterans did not receive graveside honors and only had their names read aloud on December 23.

“I have invited local news media, elected officials, prominent community leaders for the past three years,” Baisden told The Clayton Crescent, “and none have yet come to cover our event or support our event.”

The indifference pains Baisden, a disabled veteran who was named Clayton County’s Veteran of the Month in March 2019.

“Most people do forget the costly and painful sacrifices that our fallen heroes’ families endure on a daily basis,” she said. “The death of a loved one as a result to service to God and country in the name of freedom is rough.”

Baisden points to a video by Wreaths Across America to explain why the effort matters:

Baisden is disappointed that not enough donors stepped forward before the planned ceremony. However, she says, “Every wreath purchased between 19 December 2020 and 15 January 2021 will be matched, thus buy one, get one free.” To donate to the effort, visit http://www.wreathsacrossamerica.org/GA0261P.

Similarly, the National Association of Black Military Women said its group got no help from Wreaths Across America for the veterans it honored in several historic African-American cemeteries on Conley Road last week.

‘They didn’t come through,” Adams said of Wreaths Across America. “Johnetta Williams, a retired Marine in our group. was the point of contact and coordinator of that project. She tried tirelessly to reach out to them and have us to be a part of the event. She said that they would not return her calls, nor would they respond initially to her e-mails. Then she said she felt as though they didn’t want us and like she was begging.”

Adams said Williams “has worked this project in the State of California so I knew that she was the right person to tackle the task.”

At that point, Adams asked Forest Park Mayor Angelyne Butler and Councilwoman Kimberly James for assistance. They, along with retired Army veteran Willie Freeman of the Forest Park Senior Center, stepped in to help.

NABMW, along with other veterans, community leaders, Forest Park officials, and Clayton County Sheriff Victor Hill, held the wreath-laying ceremony, noting that the cemetery had been neglected for many years. Adams said she would like to see the veterans buried there honored with a memorial wall and a digital app containing their obituaries, service information, and other biographical data.

“Mayor Butler said she was in a meeting to talk about erecting a sign for the Rock Springs, Macedonia, Brotherhood of the Odd Fellows Lodge (Cemeteries),” Adams said. “The City of Forest Park has its own sign shop.”

She added that the city “went all out to help us make this happen in less than five days.”

The Clayton Crescent presents this video, premiering at 8:15 p.m. December 24, to commemorate the historic event and wishes all veterans a Merry Christmas and Happy Holidays: