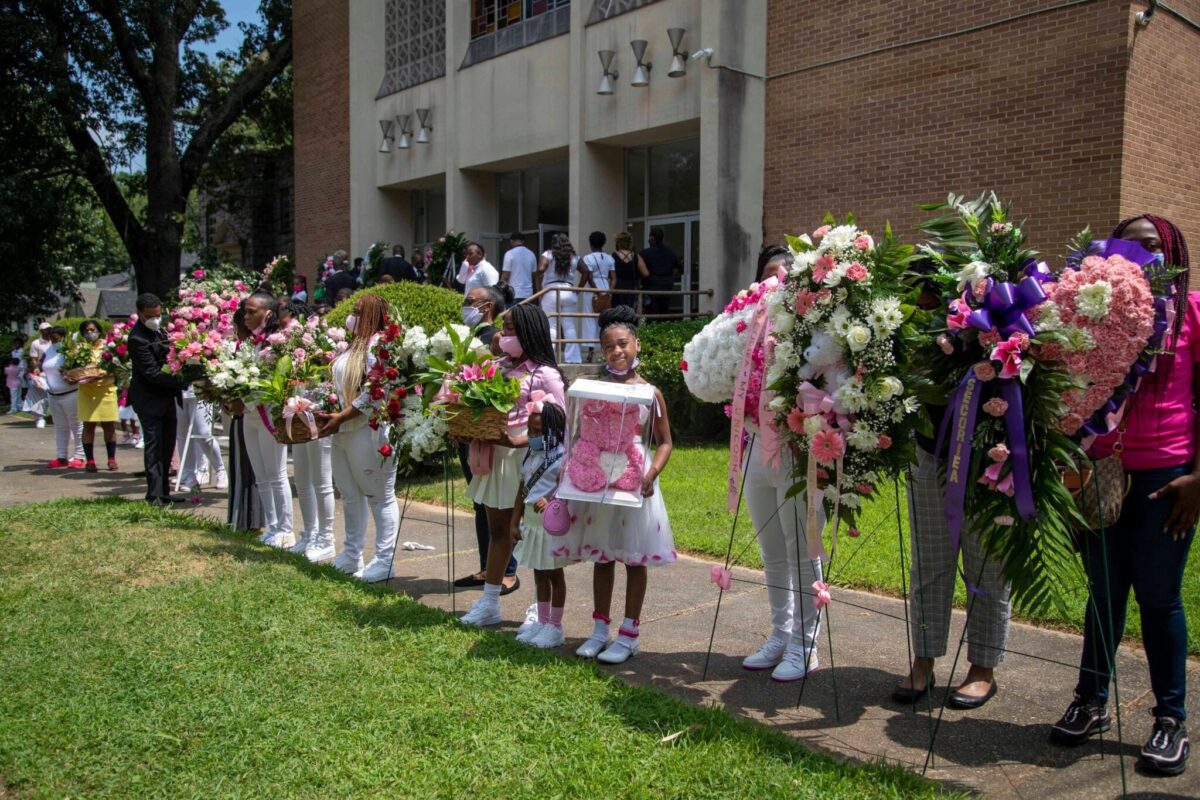 Time Magazine has included a photo of shooting victim Secoriea Turner’s homegoing service, by the Atlanta Journal-Constitution‘s Alyssa Pointer, in its top 100 Photos of 2020.

Turner, 8, was the niece of Forest Park management analyst Tiffanie Robinson. The outgoing child was killed on July 4 as her family attempted to turn away from a vigilante roadblock near the site where Atlanta Police had shot and killed Rayshard Brooks.

In police bodycam video of the encounter, Brooks was recorded telling police he thought he was near the Home Lodge on Old Dixie Highway in Forest Park. Officer Garret Rolfe shot and killed Brooks after a struggle in which Brooks grabbed one officer’s Taser, fled, and aimed the Taser at the officers. Rolfe was fired and, along with Officer Devin Brosnan, faces charges in Brooks’ death, which was ruled a homicide. Both Rolfe and Brosnan are free on bond.

As a result, demonstrators took over the Wendy’s where Brooks was shot and which was torched in the aftermath. Some armed protestors set up the roadblock where Turner was later killed.

At least two gunmen face charges in Turner’s death. Turner’s family is suing the City of Atlanta for $16 million for having allowed protestors to occupy the burned-out Wendy’s on University Avenue, alleging that contributed to tensions leading to her death.

“When I took this photo, I was thinking about how this image will join a list of images showing children of color in America that are mourning the loss of a friend/family to gun violence,” Pointer said. “I hate adding to this list but I know that these events have to be documented for people to understand the impact.”

It’s the kind of story that disturbs even the toughest journalists.

Although she has photographed “a few funerals” during her career, Pointer said, “Throughout the entire service I was crying.”

Pointer said she “had just finished photographing the funeral service for Secoreia Turner and was moving outside with family and friends to get the casket being carried out to the hearse.”

Then, Pointer saw a little girl in a white dress, holding a pink teddy bear made of roses for Secoriea and clutching a pink purse, a COVID-19 mask on her chin and a sad half-smile on her face.

“She was one of three little girls standing together, paying tribute to Secoriea,” she recalled. “Again, I wanted to capture these children having to spend part of their summer going to a funeral service. They all were the focal point but she was the only one that looked my way. I captured the image and moved on.”

Pointer, along with freelance reporter Haisten Willis, was illegally detained by Georgia Department of Natural Resources officers June 1 while covering the George Floyd protests in downtown Atlanta. Willis was illegally detained by Atlanta Police, who also illegally seized his phone and refused to recognize his digital press credentials issued by The Washington Post. The incident sparked international outcry. Both journalists were released shortly after having been detained; Pointer credits her colleagues who stayed with her and recorded the incident for interceding on her behalf.

Pointer, who grew up in Jonesboro, serves as chair of the Atlanta Photojournalism Seminar, the country’s longest continuously-operating photojournalism conference, as well as social media chair for the National Association of Black Journalists‘ Visual Task Force.

A graduate of Western Kentucky University’s widely-respected photojournalism program, Pointer interned with Creative Loafing Atlanta, the Milwaukee Journal-Sentinel, the Louisville Courier-Journal and The New York Times Student Journalism Institute and worked as a staff photojournalist at the Chicago Tribune before joining the AJC.

Knowing the power she wields through her lens, Pointer says she is honored that Time chose this photo.

“Out of all the images I took this year, I am glad they picked this moment.”

See more of Alyssa Pointer’s work at https://alyssapointerphoto.format.com/ and AJC’s 2019 Photos of the Year.