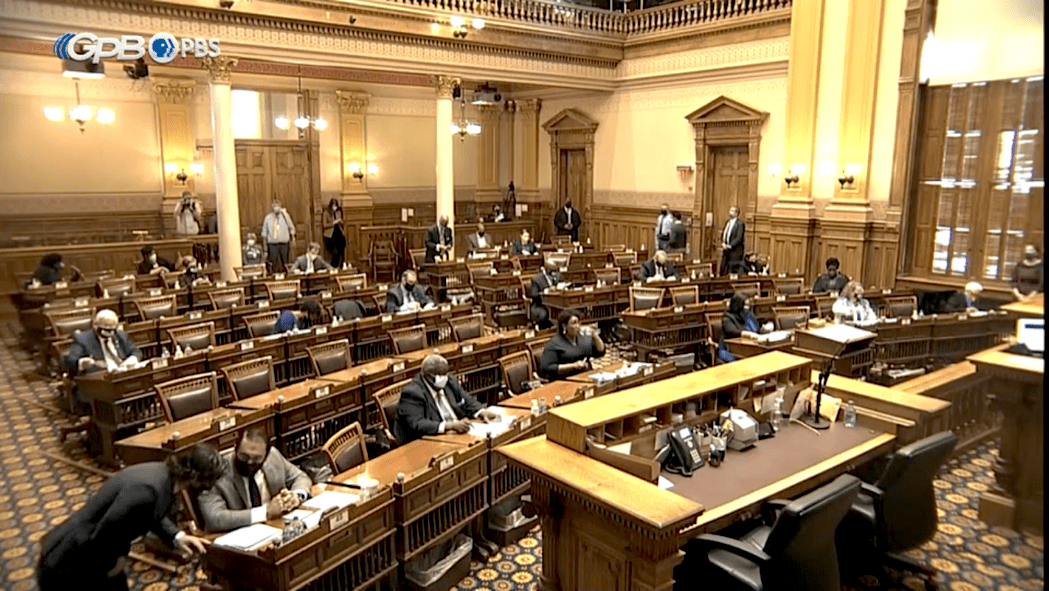 The 16 electors for the State of Georgia have cast their ballots for President-elect Joe Biden and Vice-President-elect Kamala Harris at the Georgia State Capitol in Atlanta.

Among those present is Clayton County’s Alaina Reaves (left), who is serving as one of three alternate electors.

Seating is limited due to COVID-19 concerns. Here is the press pool account according to reporter Ben Nadler of the Associated Press:

12:08 p.m.: Georgia’s 16 Democratic electors have convened in the Senate chamber of the state Capitol.

They’re spaced out in the chamber, with an empty row separating each row of electors and empty desks between each person. Each one is wearing a facemask.

The audience is very limited; just a few members of the press and some support staff.

“Georgians have a legacy of showing up and making our voices heard, and we’ve proven to the nation that Georgia is ready for big change” Williams said as she called the meeting to order.

Abrams has been elected presiding officer.

“This has been a moment long time coming,” Abrams said.

The electors each marked a paper ballot before they were collected and counted.

Each member then confirmed their vote for Biden in a voice roll call.

“I’m pleased to announce that Joseph R. Biden has received 16 votes for president of the United States,” Stacey Abrams said to applause.

Stacy Abrams said, “We are here to cast our lot in with Joseph R. Biden and Kamala D. Harris, but I also ask that we cast our prayers…this is not a moment of partisanship; this is a moment of patriotism.”