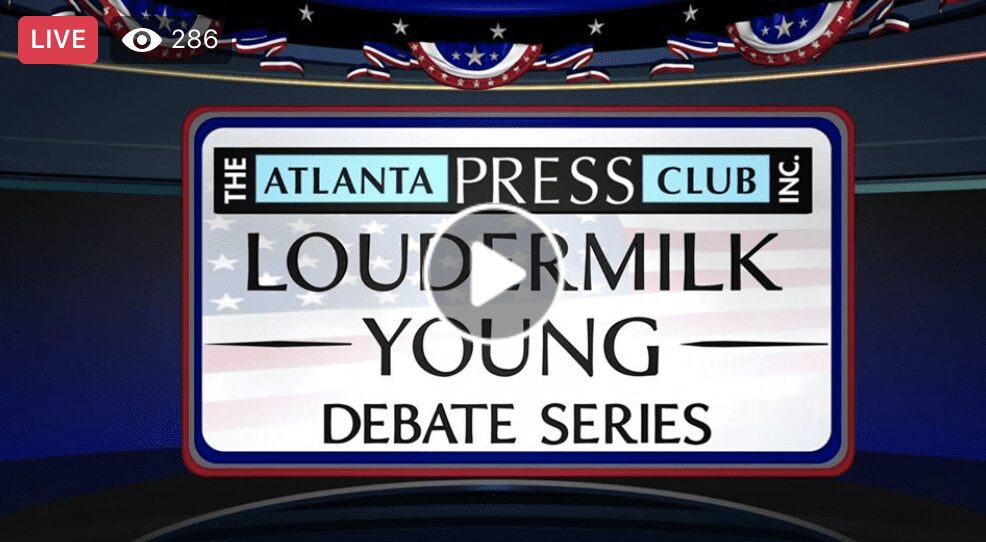 Here’s an impromptu Q & A session Ossoff took with reporters, including The Clayton Crescent’s Robin Kemp, who asked what the federal government might be able to do to help speed along state unemployment payments. Take a look behind the scenes of a press conference. Also, near the end, Ambassador Andrew Young arrived and he and Ossoff went into another room to talk. Please note this is unedited video that we streamed to Facebook Live:

GPB’s Lisa Rayam asked Warnock how he would separate church and state as a pastor if he were elected to public office. Warnock replied by extending his sympathies to Loeffler and her campaign over the death of staffer Harrison Deal, 20, in a multi-car accident December 4.

Loeffler repeatedly began her responses with the phrase “radical liberal Raphael Warnock” and largely repeated phrasing from her campaign commercials. At one point, she mentioned Warnock’s arrest for obstruction during an investigation of alleged child abuse at a church camp, asking Warnock for details of the alleged abuse. Warnock replied that he had been arrested for insisting that the police not question minors without a parent or attorney present, adding that the police later thanked him for having done so.

Loeffler accused Warnock of using the Bible to justify abortion. Warnock said he has “a profound reverence for life and respect for choice,” adding that a doctor’s office is too small for “the U.S. government, a woman, and a doctor.” Loeffler also accused Warnock of twisting Scripture to say people couldn’t both serve in the military and serve God. Warnock responded that Loeffler had not listened to the full message, which was based on Matthew 25. He later said Loeffler “has lied not only on me but on Jesus.”

Warnock pointed out that Loeffler had been appointed, not elected, to office, and accused her of having done nothing for Georgia during her ten months in the Senate. He said Loeffler had “helped fellow billionaires hide money in the Cayman Islands,” dumped stocks, and essentially used “the people’s seat” to enrich herself.

Loeffler said Warnock had invited the late Cuban dictator Fidel Castro to his church, stating that Georgia voters had two options: her way, the way of free-market capitalism and small government, or “Marxism and socialism.” Warnock said that he had been preaching about Matthew 6:24, which states that a believer “cannot serve both God and Mammon.” He added that, had Loeffler “actually listened to the sermon, she wouldn’t be using her position to make millions.” Loeffler said, “I am a Christian and a person of deep faith. Matthew 6:24 doesn’t say you can’t serve in the military.”

At a follow-up press conference after the debate, neither Loeffler nor Warnock appeared to take questions. Warnock surrogate Sarah Riggs Amico said, “There was only one candidate on stage tonight with a doctor of divinity degree, and it wasn’t Kelly Warnock.” Loeffler sent as her surrogate the governor of South Dakota, Kristi Noem, who said the campaign was urging voters–including QAnon adherents–to turn out for Loeffler.

National and international news crews were present, along with most of the metro Atlanta and Georgia political press corps, due to the intense international interest in a potential change in the balance of power in the Senate.

A security guard said about ten Trump supporters had gathered outside the studios earlier to protest.