Tenants facing eviction can get relief from courts, BOC 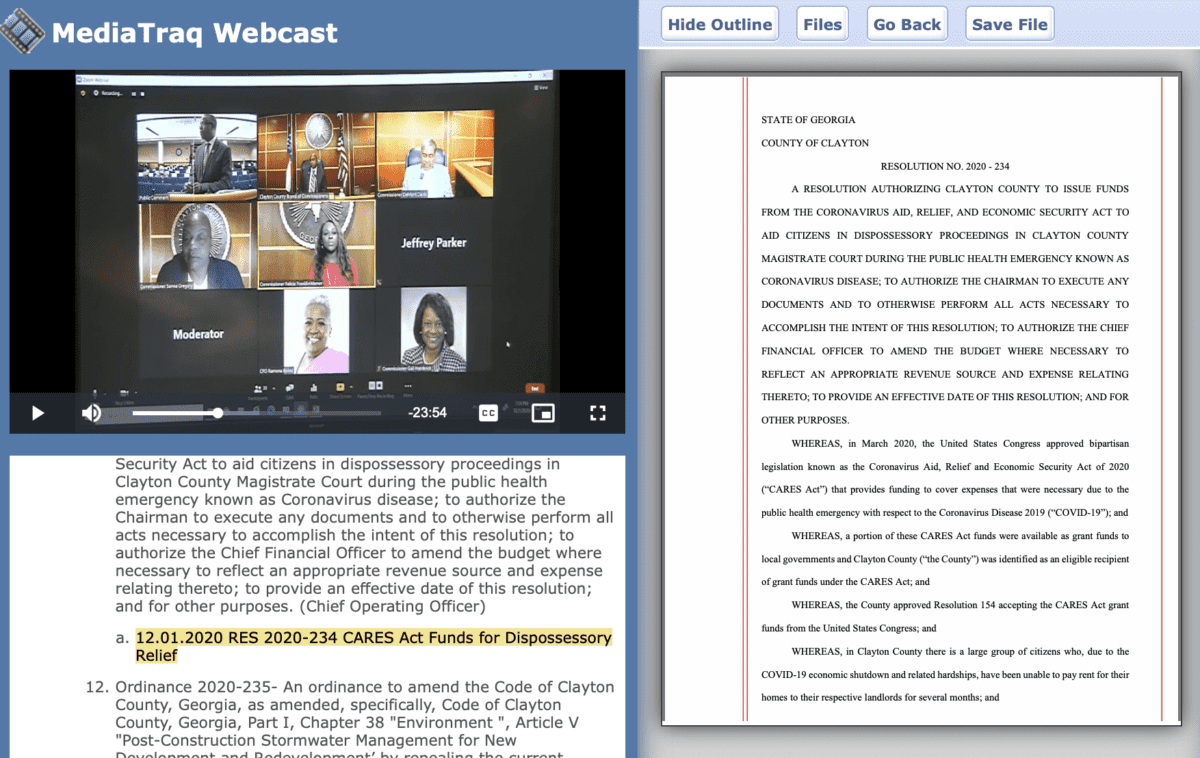 The Clayton County Board of Commissioners has passed a temporary stopgap meant to keep renters from being evicted from their homes.

“We are truly in hard times, and we are cognizant of that,” Turner said, and we’re actually in a position to do something about it, so that’s what this is about. And I commend my board members and the court system and others who worked on this to make sure that we are doing something for our citizens.”

Many people who have lost their jobs during the pandemic have been unable to pay rent for several months. Landlords have not been able to collect their rent and are also hurting financially.

The aid would be approved on a case-by-case basis to hold off eviction proceedings “for a limited, defined period of time.” The money would go directly to the landlords “only if a settlement is reached which will allow the tenant to remain in their home for a limited basis upon partial payment of back rent owed, and that such [relief] must be referred and recommended to Clayton County staff for consideration by the Clayton County Magistrate Court.”

To do this, the resolution states, the county will enter into the Aging Subgrant Contract with the Atlanta Regional Commission.

County Attorney Chuck Reed said the resolution provided for a mechanism between the county and the court system. Turner said, “I believe the Finance Department is going to distribute the actual checks to the landlord.” The aid will not go through any nonprofit but through the county, he added.

“Basically, it’s a million dollars that the Board of Commissioners has set aside for the purpose of helping renters and landlords who are in danger of of being in dispossessory of their homes and apartments,” Turner said. “So this money will help. And also, it’s in conjunction with the court system, to make sure that those people who are facing evictions are able to get some money on the front end, so they can keep form getting evicted, but at the same time, it will also lessen the backlog of dispossessions that are currently waiting to go through the court system. So the court system and the BOC are actually working together to make sure we take care of our citizens as best as we can.”

However, Turner added, “We all know this money only goes so far. So as we have an opportunity to help our citizens, that’s exactly what this board intends on doing. But at some point in time, there has to be a Plan B for our citizens to make sure that they are getting their affairs in order so it doesn’t come to this again.”

Commissioner Felicia Franklin-Warner said she had been on a call with staff about the project, and “I will tell you that the staff worked very meticulously with a lot of folks that will be involved in making this happen.” She added that she was glad the money would go straight to the landlords, many of whom also live in Clayton County and are at risk of losing their rental property if they can’t pay the mortgage.

Franklin-Warner said she thought the county was not legally able to disburse funds directly to individuals. CFO Ramona Bivins said, “At no time did anyone say that we could not provide those funds….through a third-party like we do with the other grants.” Bivins deferred to Reed for legal specifics.

“Correct me if I’m wrong, Mr. Reed and CFO,” Turner said, “but each person or entity that receives a check has to be a registered vendor. So they have to go through Central Service to become a registered vendor, which allows us to give them a check.” Turner added that Clayton’s program is very similar to one in Gwinnett County.

“The fact that it is being aligned with the court system may put this in a different situation that just a general giving of money to another entity,” Reed explained.

Turner told The Clayton Crescent the aid would buy tenants 30 days to get their affairs in order, especially after the first of the year when evictions could ramp up.

“We’re trying to handle this now,” he explained. “There’s a huge backlog of these eviction cases, and when they hit, they’ll be rolling quick and hard.”

Tenants will have to wait to find out next steps, however.

“Last night was the first step,” Turner explained. “The next stage is to create a site, and tenants will have to make application. Magistrate Court will know which files to pull for each person and would work with the landlords. Tenants would have 30 days to resolve their issues.”

Turner added that the county is being very careful with the funding: “We are accountable, just as we hold others accountable.”